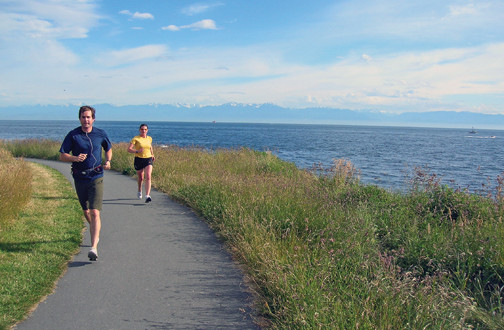 No Time for Tea: Making Tracks in Victoria, BC

Story and photos by Craig Romano

From the top of Mount Douglas, I find it difficult to keep running. No, the trails and roads leading to this small peak on the outskirts of Victoria didn’t wipe me out. They’re not that long, nor that steep. No, it’s just Mount Douglas – like almost all of the other places to run throughout and around British Columbia’s capital city – is just so darn beautiful; that no matter how absorbed I get into my run, I feel compelled to stop and take in the sights. That’s the biggest problem with running in Canada’s Fittest City—trying to concentrate on the run and not being stopped by the beauty of the city and its natural surroundings. But then again, the gorgeous scenery is why I enjoy running here. The trail system is excellent and extensive; there are hundreds of kilometers to keep me content for the long run!

When Sir James Douglas established the Hudson’s Bay Company trading post at Fort Victoria back in 1843, he probably had no idea that his Vancouver Island outpost would evolve into one of North America’s most charming cities. Nor could he imagine that it would become Canada’s fittest city. According to Statistics Canada, 36% of Victoria’s adult population is active (nearly double the national average). How could they not be, living in such a mild climate surrounded by stunning coastline, golden hillsides, emerald ridges and snow-capped mountains?

In Victoria, runners are as ubiquitous as the showy gardens the city is famous for. And this city caters to them, too. There are long distance-interconnecting paved paths throughout the Capital Regional District (think great bicycling, too); greenbelts and parks in every neighborhood; and superb provincial and regional parks ringing the city offering topnotch trail running opportunities. When I visit Victoria, I bring both my road and trail running shoes. And if I want an organized running event, this city teems with those too, including one of the finest (and my favorite) marathons in North America.

Let me share with you some of my favorite running spots in Victoria and the Saanich Peninsula. You’ll soon discover that the only thing harder than resisting the urge to stop and smell the roses while running here, is trying to decide where to run in the first place. The choices of destinations are overwhelming! Okay, if you’re staying in the historic and charming downtown, you can begin your run right from there. I like the four kilometer Westsong Walkway, which weaves along the Inner and Middle Harbours, providing stunning views of the Empress Hotel, the BC Parliament building and scores of pier and wharves. Run along waters buzzing with the activity of sea planes, pleasure craft, passenger ferries and kayaks. When you get to the end of the trail at West Bay, and you don’t feel like running back, just hop on a passenger ferry to take you across the harbor back to downtown. A word of caution however about this route: time it for early in the morning when throngs of tourists, street performers and downtown workers aren’t clogging the pathway.

The best running route from downtown follows paths along the Outer Harbour out to the Seawall along the Strait of Juan de Fuca. This route, mostly paralleling coastal Dallas Road, is one of the supreme scenic urban running routes in all of North America. Meander along flower-lined paths, across manicured lawns atop bluffs hovering above the shimmering waters of the Strait of Juan de Fuca. On clear days, which are frequent here within the Olympic rainshadow, gaze out to the craggy and snow covered cloud-wringing Olympic Mountains. Watch for eagles, waterfowl, whales and seals.

Where Dallas meets Douglas Street, run past Mile 0 of the Trans-Canada Highway and perhaps reflect upon the memorial to runner Terry Fox, one of Canada’s most beloved native sons. Back in 1980 the Port Coquitlam, BC resident embarked on a “Marathon of Hope,” running across Canada bringing awareness to cancer, which the 22-year old Fox was battling. On a prosthetic leg, Terry left Newfoundland running the equivalent of a marathon a day, covering over 3,300 miles before having to stop because his bone cancer had metastasized to his lungs. He passed away the following year after inspiring an entire nation and people worldwide. He is one of my personal heroes. From this moving memorial, you can divert onto trails through lovely Beacon Hill Park, or continue along the coastal bluffs east to Clover Point, Ross Bay, or all the way to Gonzales Bay, eight kilometers from your start!

You want a long distance route right from your downtown hotel? Head north along the Inner Harbour across the Johnston Street Bridge, veering right to hop aboard one of the finest rail trails in the Pacific Northwest, the Galloping Goose Trail. Named after a 1920s gasoline-powered passenger car, this trail consists of both paved and gravel sections of the former rail line. From Victoria’s Upper Harbour, this popular trail spans the Gorge Waterway via the 300-meter wooded Selkirk Trestle before heading northward through the city. At four kilometers it intersects with the Lochside Trail. From here the Galloping Goose traverses western suburbs, beautiful Matheson Lake Regional Park, and the northern shores of Sooke Basin. It then follows the Sooke River into wilder country terminating 60 kilometers from its start at the site of an old mining town, Leechtown.

The 29-kilometer Lochside Trail heads north through the Swan Lake Nature Sanctuary before making its way up the Saanich Peninsula to Sidney and Schwartz Bay. Both the Galloping Goose and Lochside Trails will appeal more to cyclists than to runners—but ultra runners will certainly delight in them. And while the Lochside Trail is more of a bike commuter route, I highly recommend the section through and just north of the Swan Lake sanctuary. Here you’ll cross several restored old railroad trestles including one that is nearly 1,000 feet long across Blenkinsop Lake, right next to Mount Douglas. Of course, you can head over to Mount Douglas’s trails from here—but only if you want to enjoy sweeping views out to Mount Baker, the Olympics, and the San Juan and Gulf Islands from this beloved peak’s 853-foot summit. There are kilometers of trails on Mount “Doug”, including along beautiful Cordova Bay.

If you prefer flat and fast, just to the west of Mount Doug is the large Elk/Beaver Lake Regional Park. Consisting of over 1,000 acres, this park contains the adjoining lakes of Elk and Beaver, old-growth forest, sprawling fields, sandy beaches and kilometers of excellent, almost level trails. The Thetis Lake Regional Park just north of Victoria is another local (and my) favorite spot for trail running. In this sprawling 2,000-acre park you can join hundreds of other runners for the 5 kilometer trip around the two Thetis Lakes—or venture off on side trails to groves of giant Douglas firs, grassy ridges punctuated with oaks or along inlets and peninsulas harboring gnarly madronas (arbutus here in BC).

The nearby Mount Work Regional Park is a great place for a lung-busting trail run. Follow a 6 kilometer trail up and over this 1,473-foot peak, the highest on the Saanich Peninsula and be prepared for visual paralysis. It will inflict you several times along this elongated peak as you break out of forest cover onto the rocky ledges granting jaw-dropping views of Victoria, the San Juan Islands, Salt Spring Island and the Olympics. While taking in the sights, be sure to watch your footing as the terrain on Mount Work is much like an Appalachian Mountain – rocky and ledgy. You definitely don’t want a “Work” related injury!

The supreme Victoria area trail running experience awaits you at the sprawling Gowlland Tod Provincial Park. Named after the Gowlland Range of peaks rising over 1,300 feet above dramatic Finlayson Arm and beautiful Tod Inlet, this 3,000 acre park is the largest natural area on the Saanich Peninsula and offers more than 25 kilometers of trail.

From the McKenzie Bight Trailhead, start off on a challenging and visually stimulating traverse of the range. Drop into a lush ravine to rocky, undeveloped coastline and then start a grueling climb, passing a nearly-hidden waterfall. On rough terrain (but generally good tread), rock and roll up and over several summits including Jocelyn Peak and run along the fjord’s edge on your way to Holmes Peak. From here you could go farther up and over steep Mount Finlayson, but that’s pushing it! When I did the traverse to Holmes Peak and back earlier this summer, I was more than content (and a bit sore) completing 25 kilometers of the most scenic and challenging trail within the Capital Regional District.

I’m not surprised at all that Victoria is Canada’s fittest city. I know every time I visit, I can’t resist taking off for the region’s excellent parks and kilometers of beautiful trails. One of these days however, I’ll try to make tea time—but it has to be after my run is done!