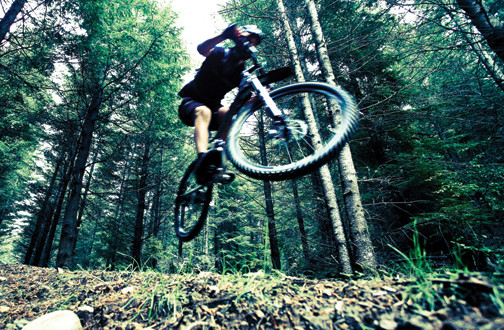 A Few Decades on Galbraith Mountain: A Cultural History

It has been an incredible experience to witness the immense amount of positive change a sport like mountain biking – and an asset like Galbraith Mountain – can bring to a community. North Lookout Mountain, commonly known as Galbraith Mountain, has changed drastically over the past 20 years as mountain biking has taken root and flourished both on the mountain and in the local community. But things weren’t always the way they are now.

In the years before mountain biking became popular, the gates to the roads were open and vehicle access was commonplace. The stories of the epic parties were at least mostly true, and if the amount and variation of trash provides us any clues, general mayhem must have surely ensued. After reaching a crescendo of craziness, the surrounding neighbors pressed for the gates to be closed and the free-for-all ended – but the litter remained. Mountain bikers, then a loosely organized user group, volunteered to help out and earned some big points with the timber company as a result. We took part in loading three dump trucks full of miscellaneous appliances, auto parts, scrap metal and more than a few indescribable and unsavory articles of who knows what.

Generally speaking, after that act of volunteerism, the mountain’s owners adopted a “don’t ask, don’t tell” policy regarding mountain bike usage on Galbraith for many years. We were lucky to have Jim “Sully” Sullivan, considered by many to be the founding father of mountain biking in the Whatcom County region, living at the base of the mountain. His early efforts in working with the timber companies in a positive, albeit somewhat covert fashion, led to the access we enjoy today.

Early trail crews met at Sully’s house on Galbraith Lane, proceeded to get way too wired on espresso, and hiked up the skidder roads to build yet another section of trail. As the network of trails grew, so did the length of our trail crew marches. Looking back on those years, it is amazing the miles of trails that were constructed without any kind of vehicle access. Early trails were often game trails that were minimally cleared, narrow and brutally technical, or existing motorcycle trails in various stages of disrepair. General trail maintenance was also much less an issue as there were vastly less users resulting in probably less than a 1,000 passes a year – a far cry from the 4,000 a month (*ITAL*)we see today!
It is out of this early cooperative trail maintenance effort that the WHIMPS (Whatcom Independent Mountain Pedalers) were born. “I’d say the WHIMPs got serious around 1986-7,” Sully says, “mainly as trail clearers. Local solo riders saw value in coalescing.”

As with many other things, people get along pretty well when there is a lot of supply and not a lot of demand and those were the general conditions on Galbraith for almost a decade. We rode on the mountain and built trails without as much as an afterthought. Things were what they were, and access seemed, in a weird historical sense, like a given. Maybe it was because, at that time, most forested areas were openly accessible and minimally managed. In much of the surrounding woods it was commonplace to venture off via mountain bike, motorcycle or 4 X 4 and not ever really feel like you were trespassing or doing something wrong. We were just doing what so many other user groups had done in our region for so long before us. 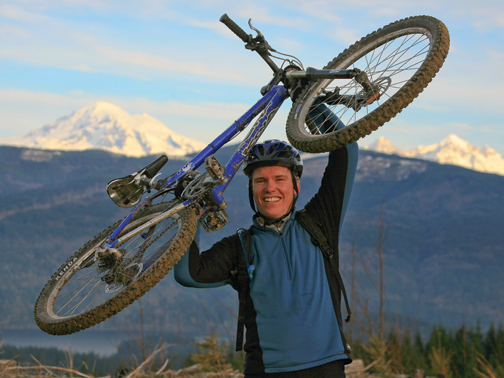 Trail building during that era was pretty loose with the main rule being “don’t harm any marketable timber”, and that actually seemed really like the only rule. With that ethic at heart, the network of social trails expanded. Many of those same trails remain in some iteration or another and provide the backbone of the trail system, as it exists today.
Trailhead access early on consisted mainly of stealth trails through vacant lots at the end of a myriad of dead end streets that terminated at the foot of the mountain. Which streets were chosen was a direct reflection of how copacetic – or not – the neighbors were. Eventually, the preferred North side access became the ever-popular Ridge Trail currently served via the Miranda Trailhead and a small City of Bellingham Parking lot. Southside preferred access was via Galbraith Lane – a road name that was eventually conferred on the mountain by the user community at large.

To many of the long-time local riders, this era of Galbraith history is considered to be somewhat of a Golden Age. As the sport of mountain biking progressed so did the experimentation with wood features, ramps, stump drops and ladders, all showcased in the well-loved “Chutes and Ladders” area. Virtually no timber harvesting occurred during these years and the trail network expanded in a more or less organic fashion without incident or conflict. In a geographical sense this time coincided with being at the end of a long timber harvest cycle. The forest stood tall, in places dense and dark, and the landscape contributed to the sense of mystery and the feeling that this was an adventurous place to ride bikes, especially those outfitted with marginal 1980s mountain bike technology.

At the end of the so called “Golden Age” a local timber company and real estate developer, Trillium Corporation completed a long-pursued land trade and acquired essentially 95% of the mountain biking area as we know it today. The new landowners understood the potential liability of having an unplanned derelict trail system on their timber property but they also understood the potential value of having a user group help manage their lands. Fortuitously, the CEO of the company was as much a pragmatist as he was a mountain biker, and a groundbreaking stewardship agreement was forged. For the first time the mountain biking community had secured legal access for an expansive primary mountain bike use area in our region. 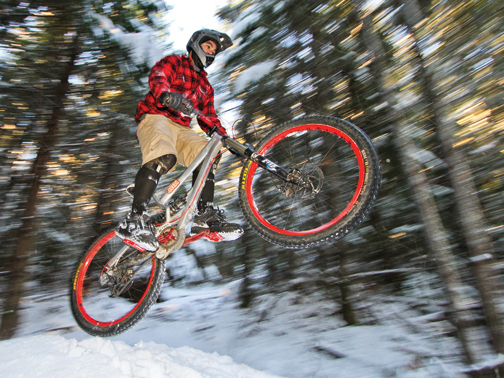 It was this stewardship agreement that led to the rapid progression of the trails system. The original version of the agreement was a bitter pill for some, as one of the main stipulations for access was a ‘no structures allowed’ policy. In order to be in compliance with the new set of rules (and as many saw it, complicit with “The Man”), all of the wood features were decommissioned and for a few years the trail system was classic old-school singletrack with no man-made features.

The decision to pull down the woodwork wasn’t popular in some circles, but the unfettered trail building was reigned in and a more controlled trail management paradigm was adopted. But, the willingness to adapt to the new rules, along with the positive impacts of litter control, better trail construction and more responsible recreational use inspired confidence in the landowner. There were certainly struggles along the way as both the landowner and the WHIMPs adjusted to the new relationship. As new risk management practices were observed and Technical Terrain Features became the accepted standard in mountain biking areas around the country, the woodwork gradually returned and the trail network progressed in quantity and quality, facilitating a variety of riding styles.

Fast forward to where we are today. It is an incredibly unique community benefit to have access to world class mountain biking within a 15 to 30-minute ride via a renowned Greenways trail system that connects the neighborhoods of Bellingham to Galbraith. Over 30 miles of former railroad and road right-of-ways have been converted to a well-thought-out connector system that provides great off-street access to the mountain bike trails.

Recently, the WHIMPS held a very successful fundraising event where nearly 500 people showed up to celebrate the visual arts that celebrate the burgeoning cycling culture in and around Whatcom County. When it comes right down to it, a huge reason – if not the sole reason – that the mountain bike community thrives is because of the one-of-a-kind metro mountain bike playground known as Galbraith Mountain. Today we have a municipality that is actively seeking ways to utilize the mountain as a recreational revenue generator. Whatcom County is home to four bicycle manufacturers, seven retail bicycle shops and is augmented by many other businesses like breweries, restaurants and hotels that support a large cycling community. An economy of scale is in place and the momentum keeps building. 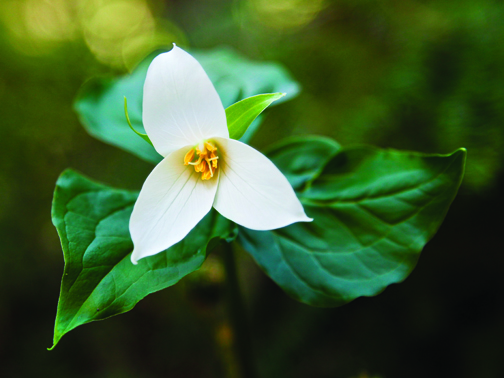 The ability of businesses to attract quality talent utilizing the recreational opportunities of the area, especially Galbraith, is often cited by HR Managers as a way to combat the higher salaries that are offered in larger metropolitan areas. Some local companies highlight Galbraith Mountain and the world class mountain biking in their recruiting literature. Some have even been known to take candidates on bike tours of the area. Many educational institutions including public, alternative and tribal schools also access Galbraith Mountain. Youth development activities such as Eagle Scout and community service projects are now commonplace and the lure of Galbraith is a catalyst for youth volunteerism. Members of the mountain biking community view this increasingly widespread acceptance from so many different sectors of the population as a success story for mountain biking as a sport and also for its contribution to the community.

We’ve seen a lot of changes in the last 20 years on Galbraith Mountain. Victories and setbacks. Conflict and compromise. But the future looks bright and the riding just keeps getting better.