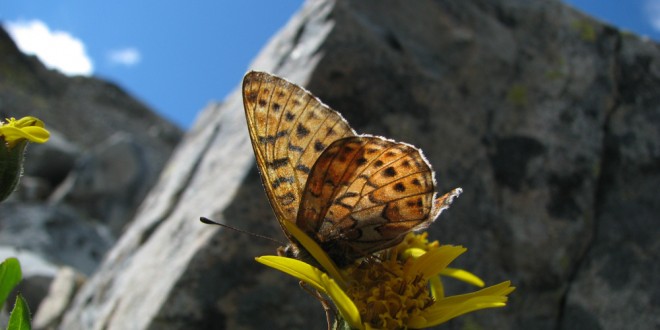 Butterflies might not be the first things that come to mind for the Northwesterner looking for fresh fields of outdoor experience. But just listen to this fevered description of high adventure from the May, 1936 National Geographic, in an article entitled “Butterflies – Try and Get Them,” by Lawrence Ilsley Hewes:

“If you are a real hunter, try for Papilio bairdii oregonia, another swallowtail. You will find him along the middle Columbia River. Here is game for the skeptical, this brilliant yellow and black Papilio. He is rather scarce. But in a certain canyon, year after year, in the arid summer heat, he may be taken in late June.

“Imagine a gorge with the west wall a sand chute covered with black rock float. The east wall is terraced basalt. Quietly you move along among the blistering rocks with the white-sand skyline six hundred feet above.

“Oregonia is a crisp, sharply marked denizen of the arid wind. He is utterly devoid of leisure; his flight is bold and rapid. The canyon thistles invite him. Far down the steep slope, near the thread of the drying streamlet, grow these scattered blooms that are his undoing. Over the sharp sand edge above drops suddenly this brilliant raider.

“Abruptly he sweeps upward, pauses, and drops back. Around and across he flashes his quick reconnaissance, then for a few seconds he hovers, nervously pulsating splendid wings over the cloying sweet.

“You must be alert or he is gone. Choose a high position so you may dart downward. The up-climb in the loose sand will quickly exhaust you in this heat. For a moment the insect is utterly oblivious. If your movement is swift and careful, he is in your net!”

Such is the excitement available in the pursuit of the Oregon Swallowtail, the State Insect of Oregon, to this day – although it is even more scarce now, much of its canyon habitat lying beneath the reservoirs that bring our cheap power and confound the migrating salmon. But this is far from the only species of butterfly across Cascadia that rewards its pursuit with real adventure.

Nowadays, while study with nets and collections remains a vital activity if we are to properly understand and conserve our butterflies, most folks will prefer to hunt them with binoculars and cameras. This takes no particular skills that a good birder has not already developed, except perhaps even greater stealth, because one can usually approach them much more closely than birds; and a sensitivity to the plant world around us, upon which the butterflies depend, and which, with a little knowledge of herbage and bloom-times, helps to predict their occurrence. One of the most exciting events in butterflying is to postulate a species’ presence on the basis of the botany, and then to go there at the right season, and find it flying.

Nearly two hundred species of butterflies occur as residents or visitors in the greater Northwest. Every one carries its own charms and excitements for the lepidopterist or watcher. Some, however, combine beauty, behavior, and habitat preference such that they offer a special treat to those intrepid or imaginative enough to track them down – like the Oregon Swallowtail among its baking basalt redoubts in the Columbia, Snake, Deschutes, Yakima, and other black canyons on the east side of the Cascades. Because butterflies haunt sunny places where their food plants grow, they are often paired with high, flowery promontories that take considerable effort to reach and give great scenic beauty and fascinating encounters in return.

Here are six more suggestions for exciting butterfly capers in Washington and Oregon:

The northern butterflies of genus Boloria, or lesser fritillaries, mostly frequent the High Arctic and Arctic-Alpine conditions of our mountain peaks. The largest of them, an orange, buff, and brick-red beauty named for the Phoenician goddess Astarte, dips into the Lower 48 in only a handful of places in Montana and Washington. The best spot to find it is on the talus slopes running away from Slate Peak, beyond Hart’s Pass, at the head of the Methow River drainage in the North Cascades. Nimble hikers who follow the trails from Slate Peak to the north and east into the Pasayten Wilderness Area may spot it, nectaring on yellow daisies. But you must choose your time: Astarte’s Fritillary flies only in midsummer and only in even years, as its caterpillar takes two years to develop into the adult. The highest rockslides and fellfields deeper into the wild may reveal the even rarer Lustrous Copper and Labrador Sulphur.

Everyone knows the tiger swallowtails of our city parks. Several other species of swallowtails patrol canyons along hot mountain flanks mid-May or so, depending on temperature and snowmelt. Great swallowtail canyons include Icicle, above Leavenworth; Yakima, Santiam, and the Illinois and Rogue rivers in Oregon’s Siskiyous. One of my favorites, for both numbers and diversity of spectacular swallowtails, is Pipestone Canyon in the Okanogan near Winthrop. Hiking down the trail, you’ll be hazed by dozens of Two-tailed Tigers, the largest butterfly in the Northwest; some crisp little Indra Swallowtails – jet-black with yellow spots and very short tails – may still be on the wing. Watch for damp spots, where swallowtail, blues, checkerspots, and skippers gather in mud-puddle clubs to sip salts. Once, along the muddy shore of Campbell Lake, I spotted six species of swallowtails -Two-tail, Pale Tiger, Western Tiger, Indra,  Zelicaon, and Oregon – all puddling together—what a spectacle!

Arctics and Alpines of the Olympics

Western Washington is subtle for butterflies, given its forest cover, cloud, and rainfall. The Olympics make a dramatic exception. Their expanses of arctic-alpine steppe and subalpine meadow around timberline abound in butterflies in a sunny season of neither too much nor too little snow. Hurricane Ridge and Deer Park offer most of the special butterflies, but for wilder, more rewarding encounters, take the trails into Royal Basin or Graywolf, Mt. Townsend or Tubal Cain, or any of the high wild parklands at the head of the Elwa, Dose, or other remote basins and ridges. What you are looking for are two high-country specialties left behind by the glaciers: the cougar-colored Valerata Arctic, which lives nowhere else; and chocolate-and-cinnamon Vidler’s Alpine, endemic to the Olympics and North Cascades. Valerata,  invisible against the lichens until it flies, likes drier scree; Vidler’s flutters above lusher tundra and haunts flowery seeps along with lovely Sara’s orange-tip.

Mini-jewels on the Summit of Steens

Not all that glitters is big! You cannot traverse the mountain trails without noticing bright little blue butterflies, sometimes by the hundreds, mobbing a trickle across a sandy path, or a spot where a pack-horse has peed. Of 25 kinds of blues that flit all across Cascadia, one of the most exciting is also one of the smallest, just the expanse of my thumbnail. A little dusky, not as bright a blue as some, the Shasta Blue has brilliant turquoise gems set all around the edge below. The thrilling part is where it lives: not only on its namesake Mount Shasta, but also on the summit of Steens Mountain, that great, remote, and spectacular sentinel in the Malheur country of Oregon. If you haven’t been up there, you need to go. After snowmelt, Steens is alive with butterflies, its wildflowers dripping with their bright nectaring forms.  Look for tiny sparks erupting from the rock scree around the very highest slopes, saddles, and summits; then go on your hands and knees to see them well, preoccupied as they drink from wild buckwheat flowers by the trailside.

Frits of the Ochocos and Siskiyous

Speak of glittering! Among our “bright wings of summer,” few glister as brightly as the fiery orange greater fritillaries, aka silverspots, their undersides adorned with quicksilver orbs. All ten Cascadian species feed on violets as larvae, so where you find Viola, you find frits. These pumpkin-colored gliders are a common sight in mountain meadows, flirting with thistles and mints; then pausing until, alarmed, they rocket off to somewhere else. Northwest butterfly folk know there’s nowhere better for abundance and diversity of fritillaries than the Ochoco Mountains east of Prineville, Oregon – unless it’s the Siskiyous, south of Ashland. In the Ochocos, Big Summit Prairie (and Bridge Creek Wilderness for backpackers) reward the summer visitor with scads of silverspots. In southwest Oregon, the Siskiyous all around Mt. Ashland are superb, as are the Cascade-Siskiyou National Monument and Green Springs across the valley to the east. You could find half a dozen or more species of fritillaries at once, by the score and more, thronging each patch of dogbane, so brilliant, you might need a sunshade for your eyes.

My final adventure is a departure, for it concerns moths, not butterflies, and takes place in winter. We have some beautiful big moths, such as the Polyphemus and Ceanothus Silk Moths, but this one is neither large nor colorful. Called Triphosa haesitata (the Tissue Moth), it is about an inch-and-a-half across, with lovely, wavy-brown, highly striated wings. These vary greatly, from cream to buff to russet to umber, rendering them cryptic against bark, rock, and many other backgrounds. Tissue moths hibernate in caves or cool buildings. One Christmas, I discovered that the battery tunnels of Fort Worden State Park in Port Townsend serve them admirably. Anyone intrepid enough to explore these pitch-black tunnels (with a good light!) may be astonished by the vision of thousands of these handsome creatures plastering the old concrete walls, their eyes shining like a million tiny gold nuggets – the greatest aggregation of butterfly-like insects I have ever seen outside the monarchs of Mexico and California.

Robert Michael Pyle is a lepidopterist and professional writer whose twenty books include Wintergreen, Chasing Monarchs, and Mariposa Road, as well as a flight of standard butterfly books such as the National Audubon Society Field Guide to North American Butterflies and The Butterflies of Cascadia.He recommends using these or any other good field guides to identify the butterflies of your adventures, and to visit these invaluable websites: butterfliesofamerica.com and wabutterflyassoc.org