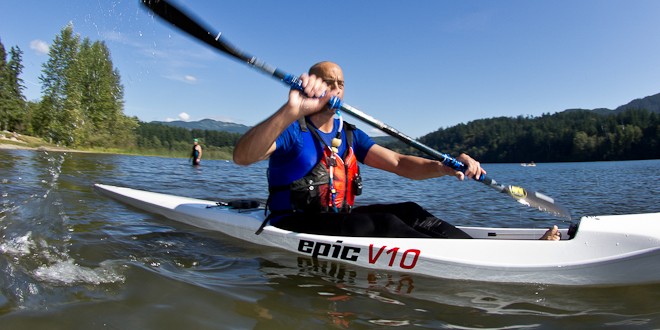 A Promise Kept, A Record Broken

My left paddle blade drags heavily across the water as I lean back in my seat and glide toward the beach. At the water’s edge, a 3-foot wide, red digital clock clicks off the time: 22 hours, 8 minutes, 15 seconds and counting.

In knee-deep water, a crew of six are waiting for me, and when my surfski reaches them they go to work like a team of part-paramedics, part-NASCAR  pit crew. Peter Marcus and Kirk Christensen hoist me to my feet, Char Waller stuffs an electrolyte tab in my mouth, chased by a watermelon chunk from Nick Cameron, and finally water from my wife Heather. On my boat’s back deck, Michael Medler is checking the two GPS units tracking my speed and distance. I feel my wet hat being pulled off and a dry one pulled on. I hear talk, focused and meaningful sounding. But at this stage the crew knows better than to expect a conversation with me. My body just wants to sleep, and as my eyes close I let my head fall back.

My eyes snap open and I’m blinking in an attempt to clear the blur of more than 22 hours worth of sweat, tears and exhaustion. Now Heather is right in my face. What is she saying? One more blink, I focus on her mouth. 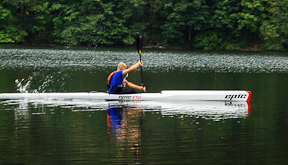 “Brandon! BRANDON! ” she shouts, as if I were fifty feet away.

Unmistakable now, her words hit my brain as I sit back in the boat and reach for the paddle. “Brandon, YOU GOT THIS!”

I am on Lake Padden, surrounded and supported by my closest friends and family, for one reason: To set a new Guinness World Record for the most miles paddled in a kayak, on still water, in 24 continuous hours. It’s not my first time at this.

I first tried to break the record in May, 2006, on Lake Whatcom. Project Kayak for Care, I called it, because I was doing it to honor my mom, who had died of cancer less than 3 weeks earlier. I crushed  the published record of the time by almost 10 miles, paddling just under 147 miles. But as I was recovering, I learned another paddler had gone a few miles further just days before me. 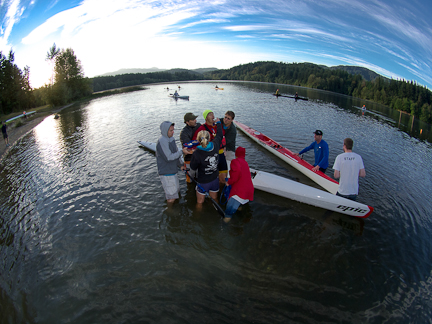 Kayak for Care had raised almost $20,000 for hospice and awareness for early cancer screening. It brought together a huge community of supporters and volunteers who bonded through the lengthy journey, preparing for and supporting the all-day-and-night attempt. And I’d succeeded in hitting my goal distance.

But footnotes aside, I’d fallen short of the record. That intersection of grief at having just lost my mom, the exhaustion of the 24-hour effort, and the frustration of having failed lit a fuse inside me. That fuse would burn for the next seven years.

“I can’t slow down, man! I’m out of control!” I shouted again and again. My arms flailed and I rocked up and back like I was doing sit-ups in the surfski. I felt like I need to be strapped down. It was 3 a.m., I’d been going for 19 hours straight and was in the throes of full-blown caffeine psychosis. With safety paddlers DJ Jacobson on my left and Michael Medler on my right, we had been cranking along above 7.5 mph, a fast pace for a two-hour race, and way, way faster than I needed or should have been going.

Suddenly, I was out of my ski. What little part of my brain that was still functioning raced for an answer. What was I doing in the water, going zero miles per hour towards my goal? Why are we swimming? Should I panic?

Suffering during an Ultra is a given, even when things are going well. After tens of thousands of strokes, skin rubs through to open wounds, puffy blisters mark fingers and palms, and darkness and exhaustion bring on hallucinations. As unpleasant as these can be, they’re all relatively easily managed and pushed beyond. What is far more complicated, and critical, is the stomach, what does or does not go into it, and whether it stays in.

During the first eight hours or so I had been following a diet I’d tested three weeks earlier on a ten-hour practice paddle. I’d held the same speed, wore the same clothes, and paddled in the same weather. Back then it had worked flawlessly. For whatever reason, this time was different. My legs began cramping just three hours in. At hour four, I stopped peeing, and wouldn’t pee again until hour 10. I began puking at about the six- or eight-hour mark.

To make matters worse, as my energy level and mood sunk, I foolishly turned to caffeine – and lots of it. It lifted me up, alright, but way past any reasonable level. That’s how I ended up thrashing in the water, confused beyond definition, with DJ swimming next to me making sure I didn’t drown and, as far as I could tell, shouting something. 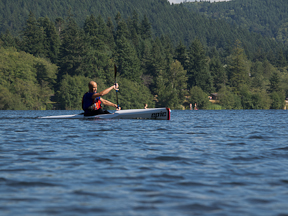 Seven years of that fuse burning inside me, the white-hot fuse of an un-kept promise to my mom. The weight of the goal to achieve not a personal best, not a state or national record, but a World Record. The months of planning and focused training to be 100 percent physically ready and completely confident of success. And that clock, that red, digital clock over on the far beach, relentlessly banging out the seconds like a sledge hammer on an empty steel drum. These thoughts tore through my brain.

But dominating all of this was the thought of the people who were there with me at Lake Padden, right then, supporting me; cheering from the shores, paddling – and now swimming – beside me; feeding me at the stops; changing my clothes and keeping me conscious. My wife and son and daughter. My closest friends. Kids. Grandparents. Strangers. Volunteer judges and safety paddlers, photographers and surveyors, many of them as sleep-deprived and as committed as I was. This was their world record too. 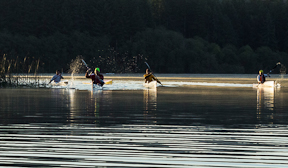 In the frigid water, in the cold and dark night air, separated from my boat and paddle, my brain compressed these thoughts into a surge of fear, and then perfect clarity.  And then action.

My paddle found its way to my hand. Michael Medler held my ski steady as I reached both arms across the cockpit and pulled myself up. DJ was right beside me, his hand on my lifejacket. “Brandon,” he said calmly, “you got this. Just pull your legs up, and paddle easy.”

It worked. The swim brought me back to life and I had a few good laps, the psychosis under control. More importantly, I had crashed hard but recovered from it, and now I knew I could handle it. I knew Ultra and myself well enough to know that the good laps would come in waves, and so would more bad laps. 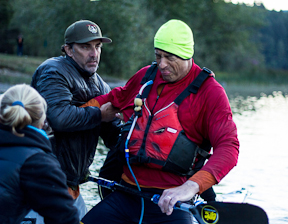 Before the sun fully rose, I swam and re-mounted again, but I have no memory of it. By then I was limping around the glassy lake, stopping for food, electrolytes, and rest after every lap. I was mentally long, long gone, and I had put my entire trust and the success of breaking the record in the hands of Heather, Peter Marcus, and the rest of the crew.

The beach filled with people. An ambulance was called and waited at the water’s edge to haul me off. Nearly a dozen other paddlers fanned out behind me, cheering and coaching me along as I clawed for each and every stroke.

With just over 20 minutes left, the world record mark was one hundred yards in front of me. Tom Brewster, the official surveyor from Wilson Engineering, waited to sound the air-horn signaling success. I scratched at the water one final time but could hold myself upright no more. I had no more to give. A second later, I was in the water for the third and final time.

Even as I floated, every breath exhausted me further. I could hear nothing. I could see only the side of my ski, floating a few feet away. The compressed train of thought that charged me into action at the first swim was not even a memory. I was a reptile. No logical thought process or desire or a Superbowl’s worth of cheering would get me back on that ski and paddling again. I was utterly, completely, blank. 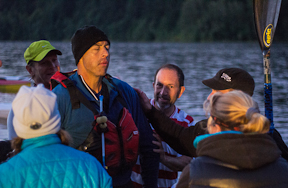 Except, there was that fuse. One spark. One un-kept promise to my mom, the fulfillment of it waiting there, 100 yards away. It didn’t require thought or desire. It was hardwired over seven years into every cell of my being.

I kicked to the ski and pulled my torso up over it, then rested, just floating there, motionless. I swung my leg over, dropped into the seat and took a few strokes. Then I pulled my legs from the water, and paddled on.

After 88 laps, some one-hundred thousand strokes, and with enough time to crawl another mile and a half, the horn sounded. 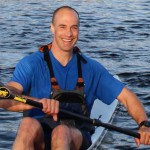 Brandon Nelson’s new world record was certified by Guinness on September 5. He paddled 151.87 miles, averaging more than 6.27 miles per hour.