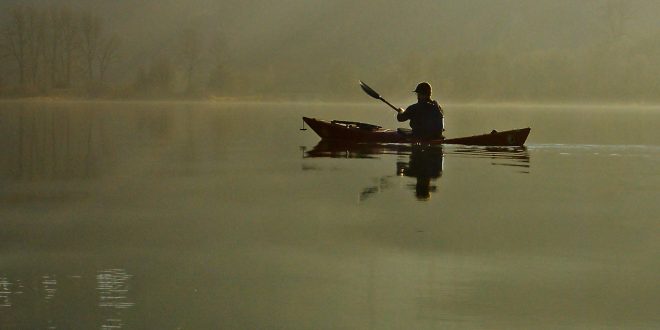 I’m dozing, when high-pitched screams followed by angry whistling tugs me away from my nap on the warm sand. Through binoculars, I spot three crow-sized birds, taking turns dive-bombing a bald eagle perched in a tree on the nearby point. Each dive-bomber lunges, screaming, at the eagle, only to pull up at the last moment, and fly back up to the heights while its buddy takes a turn. An adult Peregrine falcon is teaching two fledglings how to hunt and asserting territorial rights in the bargain. The eagle, refusing to leave its nest unattended, whistles in anger while enduring the harassment. The show continues all afternoon while we swim in the warm river, read books on the sand, and watch giant container ships go by. Welcome to another trip on the Lower Columbia River Water Trail.

The Trail That’s a Non-Trail

The Columbia is one of North America’s defining rivers, along with the Mississippi, Mackenzie, and Colorado. Its waters have been paddled since time immemorial, first by Native Americans, then fur trappers, explorers, sail-rigged ships, fishing boats, and now by barges, container ships, kayaks and canoes. The Columbia rises in the icefields of the Canadian Rockies and tumbles into the eastside drylands. After a few hundred miles of being throttled by 14 massive hydropower dams, it finally breaks free at Bonneville Dam, where the Lower Columbia Water Trail begins.

The Lower Columbia Water Trail stretches in a double arc northwest through the Columbia Gorge from Bonneville Dam, 144 miles to the sea. It takes paddlers from giant cliffs carved by the Missoula Floods of the Pleistocene, through the Portland-Vancouver metropolis, past mazes of islands and riverside forests teeming with wildlife, to a miles-wide estuary where the mighty river merges with the world’s largest tempest-tossed ocean. It’s hard to discern where the river ends and the sea begins at the Columbia’s wide and wild mouth. The Water Trail is full of tides, sandy beaches, big views, and a paddling experience as varied as the river itself. The journey comes with healthy doses of wildness, history, container ships, big cities, small towns, eagles, salmon, and wind.

Unlike a typical trail—where you put your feet or your paddle where the path goes—the Columbia River is a wide, meandering set of routes that gradually work their way between the Columbia Gorge and the sea, with detours behind islands, up or down tributaries, loop routes, and plenty of options that aren’t limited to a “Bonneville to the Sea” linear journey. The shape and seasonal river current make it more linear than the Salish Sea’s Cascadia Marine Trail, but the vibe is similar: choices abound between beelines and wandering, mileage and meandering, endorphins and exhaling.

Reach for the Sea

The Trail has five reasonably separate reaches, each with its own character. The Columbia Gorge starts at Bonneville Dam and extends to the mouth of the Sandy River, east of Gresham. Massive cliffs soar on either side, sometimes coming down to river level. Campsites are relatively rare in this vertical landscape. Wind is not. A strong current emanates from releases at Bonneville Dam and whisks you along, especially in spring.

At the mouth of the Sandy River, you’ll enter the Portland-Vancouver reach, the urban section of the trail. This section takes you under freeways, and past houses, urban marine shipping terminals, and the airport. But forested mid-river islands and the confluence of the Willamette keep you in touch with nature.

Downstream of Portland, the river becomes a broad floodplain, with many islands offering side routes. Campsites on islands and banks thick with cottonwood, ash, and willow are common, as are bald eagles gathering to feed on salmon in the summer and waterfowl in the winter. The river takes a Northward bend, which means this stretch is the most protected from upstream winds that blow from the west.

When the river turns west again, you’ll enter the Refuges and the Lower Gorge, the river’s most diverse section, traveling from west of Longview to the old cannery at Altoona on the Washington side. On the river’s south side, a maze of marshy islands creates infinite meandering routes through two wildlife refuges teeming with waterfowl. The north side is the Lower Gorge, a series of basalt cliffs that are invisible from land. Here waterfalls drop into the river, offering paddlers a light in-kayak shower in the summer, or a raging torrent in winter. The river grows miles wide. Tide and wind strengthen, and it’s easy to understand how Meriwether Lewis got confused back in 1803, thinking he had reached the ocean. But that’s still a couple of days away.

West of Altoona, the river is vast. It’s time to start thinking about where you want to end your trip. At Astoria, the river gapes five miles wide. Here, currents reverse the river’s flow, and barnacles climb the pilings. Expect to be barked at by a sea lion or fifty. Potential trail endpoints are on both sides, at Fort Stevens State Park in Oregon and Cape Disappointment in Washington. You’ll also have to weigh exposure to the sea—the further you venture west, the more ocean-like conditions will be. Surf typically starts around Jetty A on the Washington side and Jetty Lagoon on the Oregon side, but patterns shift with swell size and direction. There’s a reason kayaking instructors use the mouth of the Columbia for rough-water skills training: the combination of swell, wind and current is as interesting a puzzle as sea kayaking offers. But if temptestuous water isn’t your thing, you can always take out a few miles before these challenging conditions appear.

Tips for the Trail

The Water Trail is equally amenable to day trips or 2-3 day routes and longer one-directional paddles from Bonneville to the sea. The full trip typically takes 4-6 days. Either way, it’s to your advantage to go early, in more ways than one.

Going early in the season avoids the most challenging condition on a westbound route: west winds. By June, they can get strong enough to create pounding whitecaps when they meet the outgoing current, especially in the Gorge, near the mouth, and in the afternoon. The strongest outgoing currents—the spring freshet of water pumped through the dams to mimic snowmelt and flush salmon smolts out to sea—are in late April and May. So if distance and speed are your thing, then spring is your friend. The other way to avoid the winds is to paddle early in the day before westerlies strengthen. On summer days, westbound paddling is often done by the early afternoon.

Camping along the Water Trail is mostly primitive camping on islands owned by the Oregon Division of State Lands, Washington Department of Natural Resources, or on shoreline private property where it’s allowed on a good stewardship basis. A few state or local parks are located in places such as Beacon Rock, Cathlamet, and St. Helens. Most of the islands are “nourished” with sand scoured by dredging to keep the shipping channel clean, so expect sand in your shoes and some carries to high ground. Practice ‘Leave No Trace’ camping: bury human waste, keep fires below the high watermark, and pick up some river litter while you’re at it.

Tide is always a factor on the Lower Columbia, even well inland. Tide changes water levels all the way up to Bonneville Dam. The interplay between dam releases, current, and tide is complex, but typically the river flows consistently west most of the time until west of Longview, where current becomes a factor in route planning.

Be sure to tie your boats up at night…and further up than you think. I’ve woken up many times to move people’s boats. The big container ships create huge wakes, so you’ll want to make sure one doesn’t steal your boat in the middle of the night…especially if you’re camped on an island.

How the Trail Came to Be

The Trail has existed for millennia, a trading and cultural thoroughfare for Columbia River tribes in wooden canoes. In the age of fiberglass and Kevlar, the Lower Columbia Estuary Partnership led the effort to document camping sites, inspire stewardship, and work with landowners and local governments to improve access in a few key places.  Many small towns along the river are still feeling the pain of declines in the timber and fishing industries. The trail can be a source of environmentally-friendly  economic development. The Estuary Partnership maintains a website with an interactive trail map and trip and safety recommendations at www.estuarypartnership.org/water-trails/columbia-river.

Neil Schulman is a writer, photographer, and conservationist based in Portland, OR. He was a member of the original Water Trail Planning Committee back in the days of Netscape Navigator and Comet Hale-Bopp. You can see more of his work at neilschulman.com