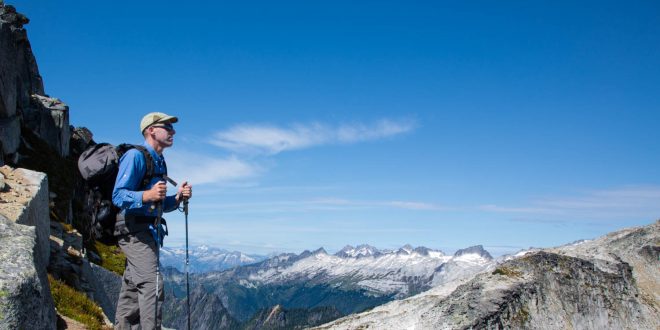 A Walk in the Park: Hidden Lake Peaks

North Cascades National Park is home to some of North America’s most awe-inspiring hiking trails. It’s truly a hiker’s park, sharing it’s most transcendent charms only with those willing to meet it on its own terms. The trail to Hidden Lake Peaks epitomizes this pay-to-play scenario, although in this case, the payment in sweat equity is moderate.

In truth, you won’t set foot in the National Park until 4.3 miles in, on an epic shoulder between the two summits. The approach up Sibley Creek is through lands administered by the Mt. Baker-Snoqualmie National Forest. And it’s magnificent, overlooked in the drawing of park boundaries.

Start from the trailhead parking lot—or perhaps along the road below the parking lot. In recent years the Hidden Lake Peaks area has become very popular and on my last visit, cars were parked beside the road for a half mile below the trailhead. If you park here, be conscious of the narrowness of the road. Climb through beautiful green forest on a trail built of roots and duff, the musical creek on your left.

You leave the trees behind at a creek crossing, below sweeping meadows that flow down from the Sibley Col and surrounding peaks. From here on, it’s all alpine bliss, albeit it accompanied by a steady uphill climb through the meadows. Depending on the season, these remarkable meadows are white (spring), green (summer) or orange (autumn). This is a great place to move slowly, stopping often, observing both the grandeur and the details.

If you find yourself here in mid-summer, you’ll be wading through flowers. Wear long pants to protect yourself from the stinging nettles. Marmots are ubiquitous.

You’ll cross the creek again, at the top of the meadows in an alpine rock garden. From here a vague side route ascends at a viciously steep pitch to Sibley Col, directly uphill. Buckets of sweat will buy you solitude and grand views in that direction.

The trail to Hidden Peaks contours to the south, now in heather and blueberry country, climbing ever upwards towards the saddle between the two Hidden Lake Peaks. The lookout cabin comes into view high atop the wickedly serrated south peak. From here it looks unreachable. Do not be daunted.

There are campsites beside the trail, although these days they are in great demand. Water is supplied by snow-melt pools. Continue up the ridge, climbing grooved rock interspersed with tiny alpine gardens, nourished by the snowmelt. The trail bends left towards the col and oftentimes snow lingers here all summer. Make your way up the gully to near the top of the cleft between the two peaks.

Turn right and ascend the boulders of the South Peak on a trail (of sorts) that ingeniously transports you up the side of the rocky slope toward the lookout cabin. Switchback up across scree and round a shoulder of the peak. The last bit requires climbing up the boulders to the summit—no exposure mind you, but perhaps not what you had in mind on your walk in the park either.

The lookout cabin is cabled down to the rock jumble that comprises the summit. No plants of any kind. Not even any dirt. It’s a dramatic, awe-inspiring place.

The views are as good as they get: 360 degrees of North Cascades wonderment, the Cascade Pass area front and center. The sea of peaks includes such monumental summits as Mt. Torment, Forbidden Peak, Sharkfin and Eldorado. The range is literally spread before you, mountain after mountain fading into the blue distance.

The lookout is maintained by the Friends of Hidden Lake Lookout (God bless ’em) and is available on a first come – first served basis if the club hasn’t declared dibs. A once-in-a-lifetime place to spend the night perhaps, contemplating the sky.

Trailhead: The end of Forest Road 1540, 4.7 miles from the Cascade River Road near Marblemount.