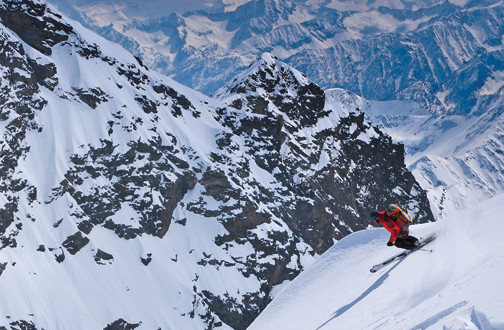 Fortunately for his clients, North Cascades Mountain Guides co-founder Larry Goldie falls squarely into this stereotype. When you meet him, you’ll get a smile featuring his TV-ad bright white teeth and a sincere greeting with a robust handshake. When you get down to business, he explains things clearly and authoritatively.
For Goldie, this isn’t salesmanship. Instilling confidence can mean the difference between life and death up among the peaks. When things go to hell, the mountain guide is the one who assures you everything is OK – then goes on to prove it. Later on, as you gather ‘round the fire and sip camp coffee, you can quietly express how you didn’t think you were going to make it until that superhero somehow pulled your ass out of the soup.

Goldie has been delivering thrilling adventures to clients all over the world for over 20 years. Along the way, he’s learned a few tricks that he likes to extol in brief epigrams:
“Be as comfortable as you can for as long as you can.”
“The end goal is the parking lot, not the summit.”
“If you don’t know, don’t go.”
And the universally true: “If it’s free, it’s for me!”

He is an internationally certified mountain guide (IFMGA) and holds PSIA certifications in Nordic, Alpine, Telemark and Backcountry ski disciplines. As an AIARE trained instructor, his knowledge of snow conditions and avalanches is as comprehensive as you can get.

I caught up with him during a brief break in his busy schedule. Recently back from a ski tour in the Alps (followed immediately by teaching an AMGA ski guide course in Alaska), he was home with his wife Blue in the quiet hills above Mazama, Washington.

What got you into climbing?

Well, I was about 20 years old. I was living in the Adirondacks and I had been doing a lot of backpacking and hiking and I wanted to take things to the next level. I took a rock climbing course and found that climbing came very natural to me. Almost immediately I felt this connection. It was a new way of using my body. Climbing has this interesting dichotomy of its mental aspect – problem solving, figuring out physical moves – but then there’s the physical part of it, of using your body, being like a little kid…climbing trees or playing on a jungle gym. When you put those two things together, it just spoke to me right away. It felt very natural.

How did you graduate from climbing for fun into making it a career?

When I was studying at Western Washington University in Bellingham, I had become an avid climber and I was always looking for new climbing partners. Sometimes it was hard to find a partner so I’d find someone who was athletic and I’d teach them the skills they needed to climb just so I’d have a partner to go out with! After a while I found it was something I really enjoyed – introducing the sport to people. It was at WWU where I started teaching rock climbing courses through the university’s Outdoor Program. During that time I got the opportunity to work with some much more experienced guides. Some of the people who taught at the university or worked at Whatcom County Parks Department were seasoned guides who had worked at places like the American Alpine Institute and other big guide services. They weren’t guiding full time anymore but they still did it a bit so I got these incredible mentorships with these really experienced guides. They took me under their wing and “showed me the ropes”, so…

So I guess it was a straight line from that to running your own guide service? 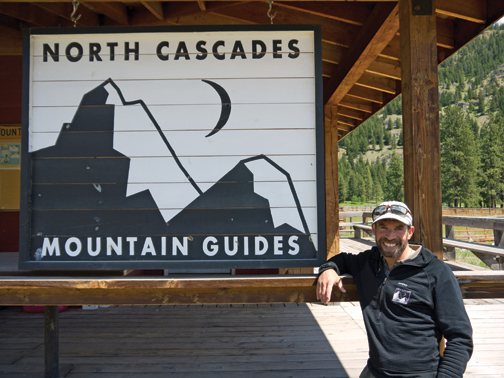 You and your partners run North Cascades Mountain Guides. What kind of adventures do you offer your clients?

We do everything from first day rock climbing – people who have never ever gone rock climbing before – doing really easy short walls and introducing them to rope systems and managing rope safety, all the way up to full-blown climbing expeditions in places like Mount Kenya, the Alps and South America. And we also do everything in the ski world as well, from basic avalanche classes and first-time backcountry skiing to week-long ski traverses through the Alps, such as the Haute route and the Ortler. We do a lot of ski tours in the North Cascades of course, including ski descents of Mt. Shuksan and Mt. Baker, so really it’s the full gamut that we try to offer in the climbing and skiing worlds.
Obviously our backyard is here in the North Cascades. We do a lot of rock climbing right here in the valley floor in the Methow. In the summer we do a lot of alpine rock climbing, so you’re up in the mountains but primarily climbing on rock. We do a lot of stuff here at Washington Pass, just 15 minutes from our office in Mazama and overnight trips in the North Cascades National Park.

We also hold permits and regularly guide trips at places like Red Rocks in Nevada. It’s incredible there and we usually run a climbing camp for ten days in the fall when the weather isn’t so great up here. We guide a lot in the Alaska range and in Denali National Park but not on Denali itself. We often have climbing trips to the east side of the Sierras in California. And we also offer quite a few trips in the European Alps, both climbing and ski trips.

So it seems you can “graduate” students who have had local adventures and dream of going overseas?

Absolutely! And that’s the philosophy behind our business. We don’t want to take a client out once and never see them again. We’re building a relationship with that person. We want to help them increase their abilities. If they have lofty climbing goals, we want to help them achieve those lofty goals. And even if they don’t have such lofty goals, if they know they’ll never become an elite climber but they enjoy climbing or skiing at a moderate level and would like to do that at a variety of cool places, it’s nice to offer them other venues.

What can clients expect on one of your adventures? What’s it like?

A client can expect to be challenged. On all the trips we try to set clients up for success but there’s always a certain level of challenge that they need to face and to push themselves at times, getting out of their comfort zone. But the one thing traveling with a guide assures you is a higher measure of safety than you would have on your own. Hiring a guide doesn’t guarantee you any summits, it doesn’t guarantee you the most incredible deep-powder skiing you’ve ever had. What it offers is a much higher margin of safety than if you were out there on your own. Many, many times, it does get you that summit or that powder. But keep in mind that as a guide my primary responsibility is to bring this person home safe and sound. If we get to the top, that’s great. And we usually do. But ultimately, my responsibility is the care of that person.

You’re an avalanche and snow condition expert. Any tips for the layman?

Generally speaking, the main avalanche danger is in the winter months. If you’re going in to the back country in the winter there’s a few basic things you can’t be without. The most commonly mentioned ones are your safety equipment; beacon, shovel and probe. The more important one I would add to that is knowledge. If you haven’t taken a basic avalanche course, you have no business heading out into avalanche terrain in the winter months. The saying we use all the time is “If you don’t know, don’t go.”

You take people on adventures all the time. What was your greatest adventure?

It’s funny: we always joke that the true definition of an adventure is that it wasn’t very much fun while it was happening. One that comes to mind is a climb with my good friend Scott Johnston in the Alps outside Chamonix. We were going to climb the Gervasutti Pillar on Mont Blanc du Tacul. It’s a famous climb and an incredible test piece when it was first scaled. It’s still a big challenging climb: a glacier approach up to a 2500 foot high rock buttress. It brings you up to a mountaintop where you can descend on a glacier.
We left our hut at 4 AM and started climbing. Scott’s wife and my girlfriend were waiting for us back in town. We figured it’d be a tough day climb and that the early start would put us back with our loved ones in the evening. The local high mountain office said conditions high on the buttress were snowy, but we’d been climbing high in the area for some time and concluded that the climb should be just fine.

This was a big climb, but we were climbing fast and everything seemed OK. We climbed up the buttress higher and higher until the rock forced us into north-facing terrain. As soon as I turned the corner, the rock was plastered with snow and all the cracks were filled with ice. This changed everything. It slowed us way down and it was a desperate lead to the top of that pitch. We switched to boots and crampons, slowing us down even more.

We didn’t know how much time this cost us but we figured we’d still make it down in time for dinner. After hours more of desperate climbing, we realized we’d never make the last gondola down. We’d be lucky to make it back to the hut before dark.

We continued struggling on this difficult icy rock and it was so slow going that the sun set and some weather moved in. So now we’re lashed to an icy rock at 12,000 feet in a blizzard, in the dark. At this point, I was no longer hoping we’d make dinner in town or at the hut. I was hoping we’d simply get down!

So, I’m a bit freaked out. I’m wearing all the clothes I had with me and I’m barely warm enough. Now, Scott was a very experienced climber. He’d been on K2 and many other big Himalayan expeditions. And we were both feeling pretty “out there”. In a storm, up high with retreat out of the question.

I asked Scott, “You’ve been in situations like this before, right?” And knowing he was fully lying to me, he said, “Oh yeah, plenty of times…we’ll be fine” and it was just what I needed to hear. I knew it wasn’t true but after a few more hours we topped out. We descended the glacier and made it back to the hut at 1 AM.

Down below, the weather was much better. When we got to the hut, all these people were gearing up for a summit climb of Mont Blanc. They didn’t realize there’s a storm raging up there. We talked to a guide we had met earlier. We told him it was raging up there; he’d never make it. The guide assured us they’d give it a try and everything should be OK.

We crawl into bunks and pass out. Two hours later, the huge climbing parties returned, turned back by the storm. They ejected us from our bunks at four in the morning! We found a cold corner to sleep in and took the next morning’s tram into the valley to meet our girls, who were unfazed by our absence. “We figured you guys were just running a bit late…”

It really was a great adventure.