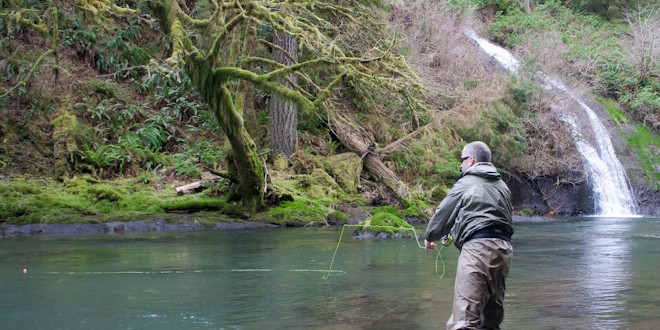 Fishing an Oregon river with my wife, Chloe, turns to dancing. I touch her back and shoulders, leading her gently. She smiles, then follows my gesture, swings back and sees in the bubbly kiss of this emerald tail-out a big slivery flash. A fish that’s come from the ocean. Chloe has taught me a lot, but today I’m teaching her to cast for steelhead. We met a few years ago at the university. She was coming through a divorce and I was surfacing from a drowning relationship. Chloe and I dated, shared our histories, took her children fishing, spent a night and a few months together, and fell in love. “Let your hook always be cast,” Ovid tells us in The Art of Love. “In a pool where you least expect it, there will be a fish.”

We had fished this river once last year in early September. The woods were dry, the water low and clear, and the fish wary of our shadows as if they were the smoky dances of fire. The fires of any romantic relationship can burn in the wrong direction. As Chloe and I got to know each other better, we had our first arguments. The issues were familiar – my excessive time spent fishing, long days on the water without a phone call, or just my need to be alone when Chloe said she needed me around. And when plans for marriage firmed-up, we had our first arguments about money. Most disagreements worked themselves through to a place of better understanding, but some clashes turned red and sore. One quarrel over my debts exploded into harsh words, slammed doors and days of silence. When I emailed her to ask if she still wanted to go fishing on Friday as we planned, she typed back, “Okay, but no champagne.” 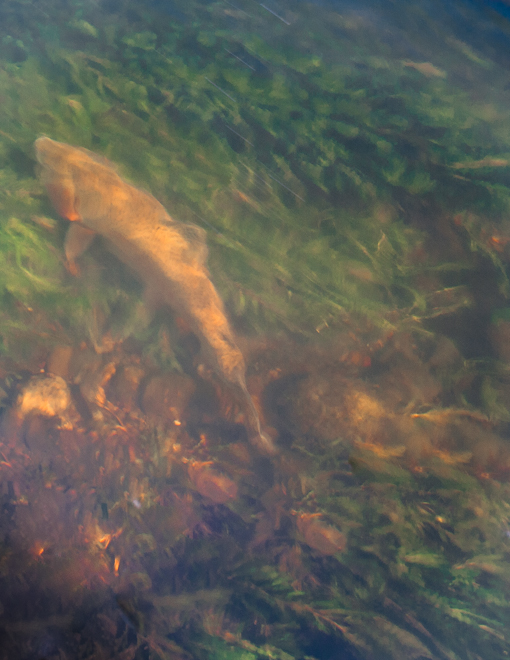 We walked deep into the warm canyon whispering about the Siletz Indians who once speared, trapped, ate, laughed and lay along these basalt ledges. What is it we really want and need from the world, from other people? The Indians surely worried about many things before the ships and wagons arrived, but not loans and credit cards. They needed each other, they needed fish. Hours into the canyon, Chloe and I didn’t see another person, and when we found a sun-drenched stone over a deep pool, we stripped down and plunged into the cold water. Wide awake with just the river and ourselves, it felt so easy to again see, touch and love completely.  Would I ever need anything more?

I would need this October when rains bring more fish and the opportunity to catch them. Chloe swings the rod forward and sends the blue spinner into the riffles. It has a nice vibratory resistance and she’s steering it right into the sweet spot. No bobber or bells for this woman. She likes to “feel it,” she tells me. I glance up at the narrow grey sky, the rocky canyon lush in moss, fern and fir – a great cathedral echoing wonder and promise. She brings the spinner across the deep tongue and there! – the arc and pulse of the rod, a splash, line tearing out – she’s into a fish. 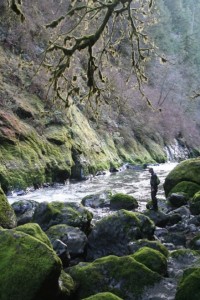 There are many ways people grow closer, and each way comes with the risk that it will lead inversely to pain and undoing. We learn each other’s burning passions and dull apathies, the consistencies and idiosyncrasies of our minds. We count on each other, raise children, take care of a house, garden, even a pet. A couple years ago a skinny grey tabby cat jumped in our boat while I was cleaning up in the driveway. The cat gobbled some leftover prawn baits, rubbed against my leg, and purred. Chloe called him Shrimp and said we should take him in. I was reluctant. Just another thing to worry about. But she and the boys convinced me. We love the cat, of course. And yet I do worry sometimes when he’s out at night – will he get bitten by a raccoon or hit by a car? Then that worry seems silly in light of the children’s health, the life concerns of our family and friends, a leaky roof, bills, work. So much matters. But during exciting moments of possibility – diving into water, reaching for someone you love, hooking a great fish –  nothing else seems to matter.

Chloe is focused, excited, anxious. I touch her flexing back and say “Great.” There’s nothing quite like a big, bright sea-run fish in a rushing river. She keeps her balance on the slippery rocks, stepping back into the shallows. I coach, and she retrieves a little line and then there’s a confused moment of slack and a rocketing burst of steelhead, its body completely out of the water in an electrifying silver somersault. This fish left the river as a small smolt two or three years ago, returning heavy, handsome and hard to hook – until now. Steelhead may be the sexiest game fish in the world – and it’s taken me a lifetime to find them. When this fish splashes back and disappears, the rod resumes its pulsing arc. “It’s still on. It’s coming,” she says. A chrome steelhead streaking through the blue-green river.

And then it’s gone.

“Oh no! What happened?” she groans. My jaw clenches, eyes squeeze shut as I exhale a tremendous sinking disappointment. My hopes were sky high that Chloe would hook a fish today. And she did. Long ago, I got over losing fish on my line, but only recently have I gotten over my fear of losing women. Chloe’s never caught a steelhead and she’s worked hard at it for days, the river rising and falling, the fish constantly on the move. Today’s conditions are ideal, her rod-work perfect. I examine the line and hooks. Everything is fine. “Sometimes it just happens,” I say. “You did great. What a gorgeous fish. Cast again.” 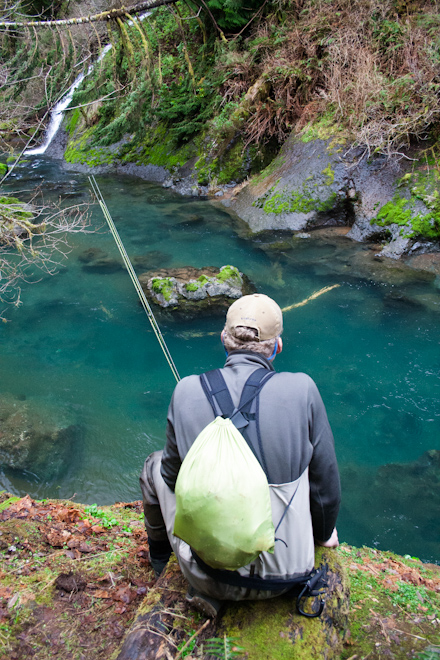 The endless, repeated promise of fishing, the hope that the next cast will be the one that connects you to a fish, a magnificent fish, the fish of a lifetime, can lead to a hobby, obsession, addiction, healthy emotional and physical persistence, the faithful practice of something like religion, even passion and love. It has to lead somewhere. “The craft of angling is the catching of fish,” Ted Leeson wrote after wading these same Oregon rivers. “But the art of angling is a receptiveness to these connections, the art of letting one thing lead to another until, if only locally and momentarily, you realize some small completeness.” And then you start over.

West and east, open ocean and weedy ponds, urban canals and pristine springs, hot swamps and arctic lakes, rowing in the fresh breeze and motoring through outboard fumes, swinging baits, lures and flies for hits and misses, landing little sprats and lead-bellied leviathan, eating some fish and letting others go, it’s been an endless journey of angling. And along the way there were relationships of every variety – backseat and front seat, crazy and calm, primal and cerebral, one night stands and lifetime friendships, years of dating and nights of being alone, divorce and marriage. The endlessly repeated, recurring, predictable, surprising, erratic and crazy experiences that are so much a part of fishing can drown in an instant or, over time, become the sustaining forces of our existence. Like the constant and constantly changing river that Chloe and I wade in today, you never know what will happen.

“Take a step upstream,” I say, “and make another cast.” 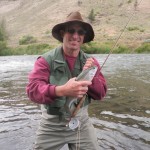 Henry Hughes’ poems have appeared in Antioch Review, Carolina Quarterly, Shenandoah, Southern Humanities Review, Seattle Review and Poetry Northwest. He is the author of three poetry collections, including Men Holding Eggs, which received the 2004 Oregon Book Award. Hughes is also the editor of the Everyman’s anthologies, The Art of Angling: Poems about Fishing (Knopf, 2011) and Fishing Stories (Knopf 2013), and his commentary on new poetry appears regularly in Harvard Review.