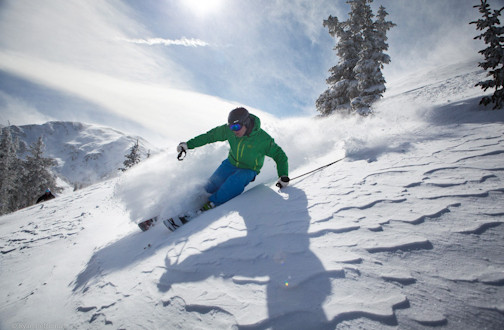 My perspective: I am 165 lbs., 5’5” on a good day, and ski tele, mostly in what some would say is my one and only forward gear – as fast as I can.  About mid-season on deep powder days, when I’ve finally gotten my 41 year old legs back into skiing shape, I love the feeling of porpoising down the slope – touching down only long enough to spring back into the air above the faceshot, and taking a breath.  Since the binding and boot are such an important part of the Tele set up, you should also know that I prefer active touring bindings such as the Black Diamond (BD) O1 with midstiff cartridges or the 22-Designs Axl.  My perspective on skis is to look for those that can handle a wide range of conditions, that is, the quiver of one.  However, since the shops demo skis and my own personal skis have blended into one, I will compare three very different skis, The Black Diamond (BD) Drift, Moment Bibby Pro, and BD Carbon Megawatt, and how I have experimented with each as if it was my one and beloved only ski.

If you’re familiar with the original BD Verdict, the Drift is an updated version of that ski, more so than the BD Verdict of today that has sidewall construction.  In fact, at a three day ski camp in the Sisters Range of Oregon (look up Sister Ski Yurts, you’ll love it) I brought down my old Verdicts to ski with one on each foot.  Even with the 4cm difference in length, I thought they skied almost exactly alike, with the main difference being that this new Drift skis better in icy conditions.

Compared to some of the other BD skis, The Drift has a softer and minimally rockered tip, but by no means, however, is it a soft boring ski.  What’s so rad about the Drift is the range of conditions it can handle for as light as it is.  At 6 lb 10 oz, and 136-100-122, this is my typical long day, traverse, or Volcano ski.  There may be lighter skis out there, but if conditions are variable, I still want at least 100mm underfoot for stability.

The tail of the drift is fairly flat if you need to create an anchor, and while I’ve heard some would rather see that tail completely flat, the slight upturn has huge benefits when needing to back up in tight trees or chutes without auguring into the slope behind you.

The Bibby’s are my slackcountry play ski.  These skis were amongst the most recent wave of new fangled boards utilizing both rockered tip and tail and maintaining camber underfoot.  Additionally, the widest point of the tip and tail were brought in towards the center from where a traditional ski would have had it, utilizing a shorter parabola which creates a faster, nimbler ski from edge to edge both on hardpack and powder conditions.  To its credit, the Bibby maintains having an effective tail to lean back on when kicked into the backseat, despite its being so rockered. 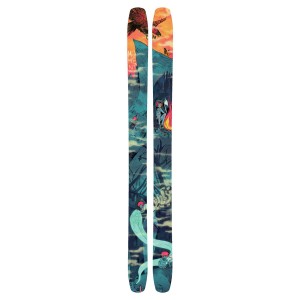 At  143-116-134, and just over 9 lbs., which ain’t too bad for an inbounds oriented ski, I use this ski typically for lift access or days around 5, 000 vertical feet.  When I first tested the Bibby at a ski demo in SLC towards the end of a long day, after a longer night with old friends, my legs had been starting to feel tired on the runs just prior.  Even with the test ski being a 184 I knew this ski was special as it had the effect of re-invigorating my legs’ spring.  I was rallying through the 16” of cut up powder and not caring if the landings from turn to turn varied between bottomless cushion or hard pack springboard.  This ski kept me in the front seat and in control better than my legs should have been doing at that point in the day.  Since then, I got myself the 174 Bibby, not because the 184 skied too long for me, but because for touring I prefer the shorter 170-something lengths as the longer tips get too long for my short legs and I have to start changing my usually mindless kick turn on the up track.  In ordering them, I was concerned that they might feel too short with the rockered tip and tail.  Luckily, this has not been the case and if I want to make long turns on groomers or quick turns in powder, this ski is fun, fun, fun.

For many of our days in the Mt Baker backcountry, skiing something 120mm underfoot just makes sense.  Whether the snow is wet and heavy or soft and fluffy, we get a lot of it.  But we would expect a ski this fat to ski well in deep powder.  The amazing thing about this ski is both how light it is for its width and how well it handles ice, slush, groomers, bumps, trees, chutes, etc.  This past summer I skied – with confidence not typical of the old megawatt – off the summit of Mt Baker (10,700-ish Ft), where it held its edge on the often icy Roman Wall and sped over the slush of the last 1000 ft back to our camp at 6,000 ft.  Never would I ever have thought that I would bring this fat of ski on a summer volcano ski day.  At a ski camp in the Sister’s Range of Oregon, I can honestly say that if there had been enough Carbon Megawatts to go around, it would have been the preferred ski by just about all 12 of us.  The rockered tip makes trail breaking in deep conditions quite a bit easier as the ski floats up on the forward stride. 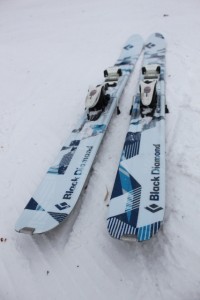 For those who know the megawatt as it has changed over the years, the carbon megawatt is the same dimensions of the original megawatt, but with camber underfoot and carbon added to its construction.  The camber and carbon have resulted in a truly versatile fat ski that weighs 9 lbs in the 178 length.  It’s amazing to me how the combination of materials, dimensions, rocker,  turning radius, overall flex of the ski versus flex underfoot, all come together to create the performance of the ski.  Sometimes the combinations fall flat.  The Carbon Megawatts at 147-120-126 in the 178’s, and 153-125-130 in the 188’s,  are going to be one of the buzz skis of the season.  For those of you who want to see for themselves what a ski like this can do for you, come on down and demo this ski mounted either tele with BD O1 bindings or Dynafit AT bindings. 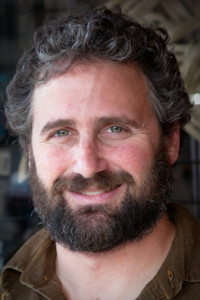 Chris Gerston grew up in Seattle, but didn’t really get started in the outdoors until at age 17 he heard the mountains saying ‘come play with me’ while running a shuttle after a day on the Skagit river. By the time he graduated from Huxley College with a degree in environmental education he had begun rock climbing and telemark skiing.

After discovering wilderness therapy, Chris spent 10 years in social services – working primarily with adolescents – before opening up Backcountry Essentials, an outdoor specialty shop located at 214 W. Holly in Bellingham, WA., which he owns and manages with his wife Erica. 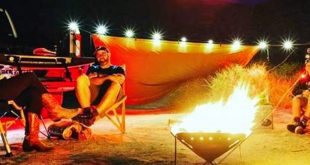 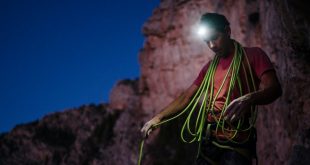 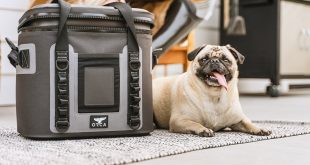