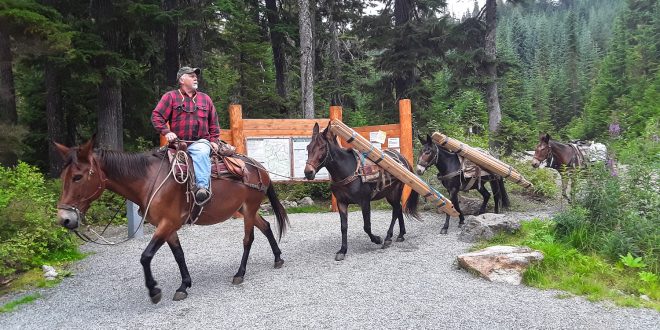 At times, it’s good to take stock of who’s in your corner.

Who’s willing to go to bat for you. And get dirty. These are friends one should keep. Now a friend that’ll brush out miles of your favorite hiking trail, on their own dime, and carry your tools for you? Now you’re talking our love language.

If you explore Whatcom County by boot tread, mountain bike tire or shoed hoof along our extensive tangle of trails, there’s good chance you owe a debt of gratitude to a group you may have never even heard of: The Backcountry Horsemen.

“We may have left a hoof print or two, but we built the trail it’s on,” says Sharon Hoofnagle, one of the founders of the Whatcom chapter of the Backcountry Horsemen. Existing on both a national and local scale, the Backcountry Horsemen is a group established to ensure that public lands remain open to recreational stock use, as well as assist in the creation and maintenance of these resources.

“We just didn’t want to get shut out of the wilderness,” says Hoofnagle. Though they have the innate right to ride on public lands, the Backcountry Horsemen know there’s no free lunch, and based on the amount of trail work they do locally, they certainly aren’t afraid of cutting brush or working a crosscut saw to make it happen.

Earlier last year and looking for things to things to do that didn’t involve being inside my own home, I followed up on a tip of an excellent mushroom foraging spot, nestled in the grove of a seed tree farm on Stewart Mountain.

The bounty proved to be fruitful (King boletes!) but the second surprise came as I was stooped down engrossed in my harvest in the thick timber beside the trail. From a few feet away came the sudden breathy nicker of a horse, to which I could only stammer out a Whoa.

Up until this point, the closest I’d ever had to a pack-animal encounter was watching a woman unload two llamas from the back of her hay-stuffed minivan at a Sierra-Nevada trailhead. In fact, I find little that elicits such a sharp pull focus of “human-scale” perspective as being shoulder to shoulder with a half-ton animal.

Unbeknownst to me I had stumbled upon the crown jewel of the Backcountry Horsemen’s Whatcom Chapter: The Y Road Trailhead and its associated network of trails sprawling across the apron of Stewart Mountain. Proudly established with “no guidance or funding from any agency,” the need for such a trailhead became apparent in the 90s, Hoofnagle says, when large numbers of Backcountry Horsemen members began riding Stewart Mountain, and parking their horse trailers along the road.

It soon became obvious that a more permanent solution was required (after all, it’s one thing to be able to shuffle your mud-spattered Subaru into a backcountry parking lot, and a completely different matter to deftly maneuver a truck and horse trailer into one). By 1999 the Backcountry Horsemen had secured the use of an adjacent lot from Whatcom County Public Works, put up the fence themselves, and opened to public use.

The Stewart Mountain system is only one of numerous access projects that the Whatcom chapter has established over its 34-year existence.

“We clear a lot of trail,” Hoofnagle says. “People say you’ve got to be weird, you go out there and get dirty and dusty. But in front you see a mess, and behind you, you say wow.”

Beyond trail work, their ability to haul heavy loads has made them many friends in the forest management game. The Wilderness Act of 1964 dictated the exclusion of motorized equipment from Wilderness areas, meaning that trail maintenance crews looking to do serious work found themselves in need of a different type of horsepower.

“Helicopters can be used for a good bit of this work, but they are expensive to operate,” Hoofnagle says. “Horses are not.”

Let’s say the powers that be need to replace an aging bridge or shore up switchbacks against erosion, which will require bringing in timbers or large amounts of crushed rock. Their crew will also need a small army’s worth of supplies to support themselves in the backcountry. Call in the Horsemen.

Once assembled, the group has various and sundry paraphernalia for saddling a horse with a load, from simple catch-all paniers to tilting gravel bags. The loads can often become comical in their size and make-up, with Hoofnagle remembering a particular friend who had long ago been tasked with affixing a ping pong table to a horse to be packed into Olympic National Park for President Kennedy. “You can get pretty ingenious with what you put on these animals.”

Once all’s said and done and the work is completed, the horses saddle back up with the tools for the trek out. “Hiking groups are delighted to have food and gear packed in to work sites,” Hoofnagle says. “And just as pleased to have us pack it back out.

“One of the coolest things is when you have a hiker or a bike rider come by while you are working. It is incredibly gratifying to have people say ‘Wow, thank you for doing this.’”

All told, the Backcountry Horsemen’s contribution to our local trails is mostly signature-less, residing in the overturned dirt or expertly placed logs, but some numbers may lend insight on their overall impact: Their most recent newsletter boasts 56,497 volunteer hours across the state in 2020, which is already an impressive number, never mind the asterisk reminding that around 30,000 hours were lost to COVID restrictions this year.

Not too shabby for, as Hoofnagle puts it: “a bunch of people who think shoveling manure is fun.” 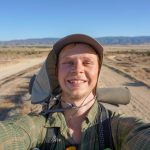 Nick Belcaster lives, writes and plays in Washington State and is typically found above tree-line, refining the art of scree skiing and warding off hungry alpine snafflehounds.