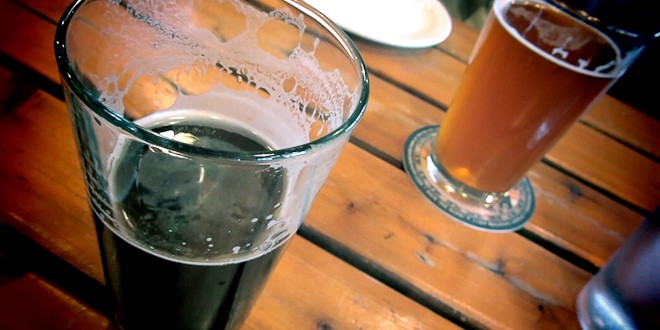 Beer is a magnificently versatile beverage. It can be enjoyed alone, or it can be paired with foods, moods, seasons, activities and environments. It also makes for the perfect post-hike refreshment, as it aids restoration, encourages relaxation and promotes reflection.

Just as beer-and-food pairings create harmonies that elevate the overall experience, visiting a brewery after a good hike enhances the enjoyment of your day. It also provides an opportunity to plan your next adventure.

When pairing hikes with breweries, consider geographical proximities and conceptual relationships. Below are some suggested pairings that will appeal to your sense of adventure – and your taste buds.

Just three miles from the new Aslan Brewery, begin hiking up the North Ridge Trail on Galbraith Mountain, also known as North Lookout Mountain. This hike is short and sweet, and it offers big rewards for little effort. After just 0.75 miles up the braided trails along the ridge, you will reach a viewpoint with panoramic views of Bellingham and beyond. If you continue on, you will arrive at a kiosk at 1.25 miles, which leads to many more trails.  “It’s one of my favorite hikes close to town,” says Aslan owner Jack Lamb. “It’s nice and easy, and it has a great perch overlooking the city that reminds me of that scene from ‘The Lion King,’ where Simba is shown the kingdom [that he will inherit].” Après-hike, enjoy Aslan’s snappy and refreshing Ginger Rye Ale.

Bald eagles can often be seen along the Skagit River, especially during their prime salmon-feeding season from late November through early February. Because of this, you might deduce that this was how the community of Birdsview got its name, but you would be wrong. It was actually named after the well-liked Skagit Valley pioneer, Birdsey D. Minkler (1849-1911), who was a mill owner, a state senator and the first postmaster of Birdsview (1881). To get a feel for the area – and to enjoy some great bird watching – take a walk, a jog or a bike ride on the Cascade Trail, a rail-trail that runs for 22 miles from Sedro-Woolley to Concrete. One good option is to park near the middle at the Lyman City Park and access the trail across the street from Davis Lane. Turn right (west), and walk along the Lyman Slough toward an expansive view of the Skagit River and the foothills. Continuing on, you will pass quiet farmlands, soupy marshes and peaceful forests, with trailside blackberries lining most of the way. After enjoying the wetlands, whet your palate at the nearby Birdsview Brewery. Sit outside and try the malt-forward Screaming Eagle IPA, which is made with honey from the nearby town of Concrete.

Hike: Semiahmoo Spit (2 miles out and back. From I-5 Exit 270, go west on Birch Bay-Lynden Road, right on Harborview Road, left on Drayton Harbor Road, and right on Semiahmoo Parkway.)

Named after Boundary Bay on the U.S.-Canada border, which was a major crossing point for bootleggers during Prohibition, Boundary Bay Brewery has been a Bellingham institution since it opened in 1995. The brewhouse cranks out more than 6,000 barrels of beer per year, and more than 25 percent of it is sold on premises. To keep up with demand, even as new breweries continue to open up in the city, it recently expanded its capacity by adding three, 60-barrel fermentation tanks. Before enjoying the bounty of award-winning beers the brewery has to offer, take a stroll through Semiahmoo Park, gaze at the actual Boundary Bay in the distance, and try to imagine what those rum-runners experienced. This out-and-back walk on Semiahmoo Spit offers four trail options parallel to one another: a dirt trail, a paved path, and two pebble beaches – one on the Semiahmoo Bay side and one on the Drayton Harbor side. Drink in views of Point Roberts, the Gulf Islands and White Rock, Canada. Keep an eye out for bald eagles, as they frequent the high perches along the spit.

Hike: Rock Trail at Larrabee State Park (Almost 1.5 miles each way and about 500 feet of elevation gain. Trailhead: From Fairhaven, go south on Chuckanut Drive / SR 11, left on Hiline Road, which turns into Cleator Road, and continue to Cyrus Gates Overlook at the end of the road.)

“Chuckanut” is a Native word that means “beach on a bay with a small entrance” or “long beach far from a narrow entrance.” Chuckanut is now the name of a road, a bay, a creek, a mountain, and many area businesses, including the multi-award-winning Chuckanut Brewery & Kitchen. So it’s only natural to pair this brewery with a hike on Chuckanut Mountain, and the brand-new Rock Trail is an ideal choice. Thanks to Larrabee State Park, the Chuckanut Conservancy, Washington Trails Association and countless volunteers who put in more than 4,000 hours of work, the Rock Trail now connects the Cyrus Gates Overlook with the South Lost Lake trail. From the south end of the parking lot, take the first fork to the right and then cross over the Double Diamond trail. From there, you will descend steep sets of stairs, weave through an impressive array of massive, moss-covered boulders and pass right below sheer sandstone cliffs. This connector trail is less than 1.5 miles each way, but it offers a number of possible loops or out-and-back routes. Post-hike, reflect on your geological journey with one of Chuckanut’s authentically made, European-style ales and lagers. Just remember to tip one for the trail crew members, who did an excellent job.

In 1792, Captain George Vancouver sighted a large mountain from the Strait of Juan de Fuca and he named it after his Lieutenant Joseph Baker. The local Native Americans, however, had already named it Koma Kulshan, or simply Kulshan. Get a close-up view of 10,781-foot Mt. Baker, which is the second most-glaciated mountain in the contiguous United States (after Mt. Rainier) and the second most-active Cascade volcano (after Mt. Saint Helens), from Park Butte’s mile-high lookout cabin. In addition to the phenomenal views of Baker, the Black Buttes and the Twin Sisters Range from the lookout, the hike to the lookout provides plenty of eye candy, too, including blueberry-filled meadows, a lush-green forest and an alpine wonderland filled with glassy tarns and sweeping mountain views that fade into the horizon. Continue your feast for the senses at Kulshan Brewery’s patio by sampling the brewery’s wide selection of delicious beers.

With a name like Menace, you should pair this brewery with a potentially threatening and difficult scramble, and look no further than Tomyhoi Peak (7,451’). Just beware, this climb is very long and strenuous. The trails traverse cliffs, pose some route-finding challenges, and Tomyhoi’s summit block requires some exposed Class 3-to-4 moves. The summit is very airy and barely large enough for more than one or two climbers at a time, but it offers unbelievable views of the rugged North Cascades (you can stop short of the summit and still be entranced with the lofty vistas). Safely back in Bellingham, calm your nerves with one of Menace’s highly quaffable brews, or choose a beer from the pub’s dozen or so guest taps. The Local also specializes in pairing beer with food, so ask your server for a recommendation from the ever-changing menu.

Hike: Horseshoe Bend (2.5 miles out and back and 300- to 400-feet of elevation gain round trip. Trailhead: 2 miles east of the Glacier Public Service Center on Highway 542, park on the right side of the road, just past the bridge and across the street from the Douglas Fir Campground.)

Under a canopy of moss-covered trees, experience the raging whitewater of the North Fork Nooksack River on a gently undulating trail that contours the river’s boulder-strewn shores. The end of the trail has a nice vantage point overlooking the river, but the highlight of this hike is the journey itself. On your way home, make a stop at the North Fork Brewery, which is also a pizzeria, a beer shrine and yes, a wedding chapel. Choose from a tasty lineup of small-batch beers, which includes cask-conditioned ales and interesting seasonal beers. The IPA is malty-sweet with a hoppy bite, and it pairs wonderfully with the brewpub’s delicious pizza.

Hike: High Divide (Lots of out-and-back or car-shuttle options with a few access points along Highway 542.)

Exercise your inner wanderlust on a section of the 20-mile-long High Divide. This mile-high ridge offers fantastic vistas of lower British Columbia and the North Cascades, including Mt. Baker and Mt. Shuksan. Many trails and routes link to the ridge, including Damfino Lakes (when the Canyon Creek Road is open), Excelsior Pass, Welcome Pass and Yellow Aster Butte, providing a myriad of hiking and camping options. Along the ridge, explore idyllic knolls, wildflower-coated meadows and unnamed high points. After your nature fix, head to Wander Brewing’s newly opened Brew Hall and explore the multitude of beer styles and flavors from the brewery’s 10 taps (plus cider and root beer). Owners Chad and Colleen Kuehl came up with the name Wander while traveling abroad, and they say it’s open for interpretation. “For us, Wander is travel, exploration, creating amazing craft beers and working toward what makes us happy, while also being community conscious.”

Aubrey Laurence is a freelance writer who has written about craft beer, hiking and climbing for more than a decade. He has climbed and consumed beer across the United States and in many countries, but rarely at the same time. He lives in Bellingham with his number one climbing partner, his wife, and their three cats.