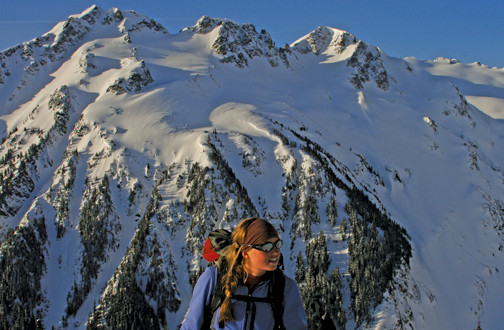 Some have said that the thirtieth year can be an auspicious time in a person’s life. A time when the confidence in one’s path is either affirmed or destroyed. A year when the need for discernment can arise within one’s consciousness. For me, it was a hard year, a good year, a tumultuous year. Witnessing death in a tragic Alaskan avalanche. Saving a life from a powerful glacial river. A wild marriage, amidst lupine and rainbows, on the lee side of the New Zealand Southern Alps. A year of choice, commitment, and letting go. It was in December of that year that I moved to the Washington Cascades, following my new wife to a new life.

For one who believes in the shaping power of landscape, the migration to the Cascades was unsettling. Gone was the alpine sweep of the Chugach. Gone was the high-altitude, low-latitude light of the eastern Sierra. Gone was the sense of space. Instead, there were steep canyons, hewn from dark-lichened granite, cloaked in dense forest. The gray-on-gray obscurity of a December storm cycle. 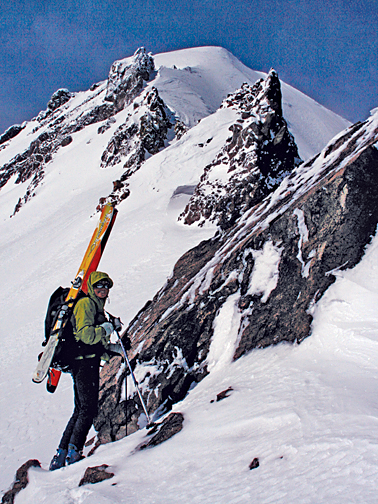 Though the mid-winter Cascades cannot be described as sunny, it was not so much a sense of darkness that struck me, but rather a sense of closeness. Ridgelines crowding tight valleys, looming five or six thousand feet above. It just seemed difficult to gain perspective, to see a world beyond. I would spend hours, often solo, breaking trail through old-growth forest, laboring not so much to make turns, as to harvest some time in the alpine. To gain that sense of space. Often, I would barely emerge from the trees in time to witness the rarefied light of a fast-approaching mid-winter dusk. Many other times, I would push absurdly higher, even when the skiing was fine in the trees, only to be shut down by whiteouts and wind. Somehow, it was still worth it. It seemed to help me breathe.

And then there was that break in the December storm cycle. A quieting, yet energizing opportunity to harvest the surrounding imagery. This occurred from an obvious, but new-to-me vantage point, atop a mountain east of Stevens Pass. Mind unpolluted by names, elevations and maps, I was surveying the North Central Cascades with fresh eyes. Rising above a sea of otherwise prominent summits stood Glacier Peak. Illuminated, spacious, inspiring. Da Kobed, the great white mother mountain. Like finding a kindred soul in a room full of strangers, I somehow felt less alone.

At the time, it seemed a simple objective. Watch the weather, wrangle an extra day off, and just go do it. A sound and reasonable concept, except that the most efficient approach route had been washed out by catastrophic floods. Thus, the weekend jaunt was a bit more difficult. Coupled with the human inability to simultaneously foresee the weather with accuracy, while finding time to act on that foresight, it seemed almost impossible. The mountain had grown more remote. It would be five years before my wife, Stephanie, and I would find the right time to make the journey together.

Traveling silently, up a silent valley, beneath towering cedars and firs, we approach from the east, up the Napeequa River. With ten days of food and fuel on our backs, we hope weather and conditions will allow us to make ski descents of several peaks near the head of the valley. If all goes well, we will try to slip over the crest to the west side, and Glacier Peak. A lone mountain goat glowers at us from a granite crag above the river. His suspicion is understandable, as it seems that many predators are on the move in this first week of April. We observe fresh tracks from wolverine, lynx, and cougar as we skin through stands of old growth, interspersed with large slide paths. Old debris and shattered trees, from a huge February avalanche cycle, are piled several meters high.

However, now the stability is fine, and we travel accordingly, side-hilling massive slopes that hang above the river gorge, a situation that would be terrifying in different conditions. The trees give way to subalpine meadows and we gain views of the peaks and glaciers at the head of the valley, slathered in the bounty of the La Niña winter.
Leaving a cache at a prominent fork in the valley, we lighten our loads to three days of food and fuel. We continue and merge, imperceptibly, with the Butterfly Glacier system, the source of the river. Crevasses are deeply buried beneath a snowpack which must be at least four meters in depth. Our intent is to approach Glacier Peak via a high route along the crest of the Ten Peak Ridge, traversing a jagged ripsaw of granite spires.

We stand somewhat precariously on the first of many subsummits, and the realities of the intended route become clear. Hours of sketchy finagling and potential failure lie ahead, but there are other options. A north facing glacier plunges into a 4,000-foot run down to the valley of the Suiattle River, which drains the entire east side of the mountain. The snow is perfect, the stability bomber. The high traverse can wait for summer temps and stickier soles. We drop in. While reveling in the run, we try to ignore the deepening sense of commitment. We will have to ascend our exposed descent route in order to return to our cache. It could get quite serious if the weather were to change. But today, it feels good. We go. 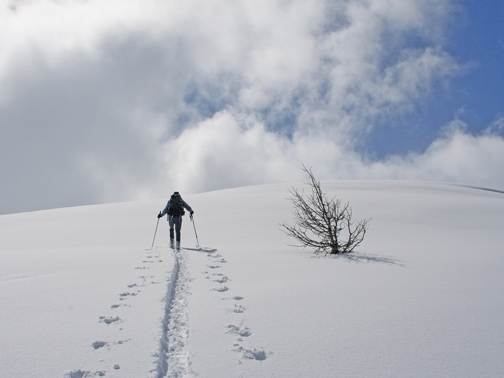 Among moss-cloaked hemlocks, we camp in a sunny meadow at the base of the mountain’s east ridge, an aesthetic cleaver that runs directly to the summit, between the Cool and Chocolate Glaciers. Deep blue overhead, pale blue seracs upvalley, rainforest green and the sound of flowing water. It all feels too soft to be a mountain wilderness.

The following morning, straight-forward skinning and cramponing deliver us to the summit, but all traces of softness have departed by noon. We lurch around in the steady 40-mph winds, watching lenticulars build up high, while thick clouds encroach from the coast. Down. Intricate turns along the ridge-crest give way to high speed surfing through soft sastrugi.
Energy levels plunging with the barometer, we would rather lurk in the tent, than pack up camp. But either we get back up and over the crest to the east side, and our cache, or we tolerate interminable slogging and almost certainly, an epic. This weather could sock-in for a week. We motivate. Somehow.

Unable to see the huge slope looming above, the building winds and swiftly falling snow have conspired to add spice to the undertaking. Our old tracks are becoming obscured alarmingly fast, and blasts of extra thick fog almost render our ski tips invisible. We could have wanded the route, we suppose, but that wouldn’t have been nearly as interesting. The occasional twisted larch tree appears out of the murk, providing a false but much needed talisman of security. Our minds strain to recall subtleties of terrain and to keep the sense of consequence at bay. Surreal swaths of blue are torn from the clouds as winds roar across the crest, providing brief glimpses of our route.

Back onto the Butterfly Glacier, we have made the crossing to the east side of the range, but the steep and featureless slope is spooky. Luckily, we have moved quickly enough that the loading is not yet problematic. We leap-frog each other’s tracks for visibility, pushing and ski-cutting small storm slabs en route. The anxiety eases with every set of turns. At some point, our skis stop sliding. Blinking with vertigo, we realize that we are down. We exhale. At least we could safely bivy here, if need be. But we have a cache with tea. And large bars of chocolate. We squint and double pole onward. Soon there will be trees. 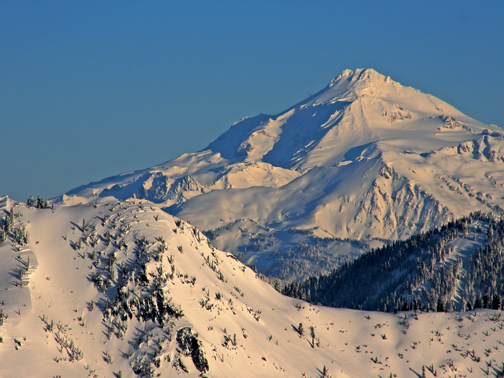 Days later, emerging from a storm-bound torpor, we follow big cattracks down the White River Valley, after crossing Boulder Pass. We finish the trip with a twenty-mile day, kicking and gliding through low-elevation slush and fir needles. Behind us, to the west, the mountains are once again wrapped in dense clouds. Views obscured, alpine socked-in. Gone is the sense of space. But the images are strong in the mind, and there is no need to look back, to bore through fog and forest, hoping for a glimpse of glaciers.

Our car waits in the mud along the abandoned logging road. The tires have that semi-sunken look, as the road has thawed a bit during our absence. The driver’s side windows are streaked with bird shit. Damn ravens. It starts up on the fourth try. I switch on the wipers, clearing away the cedar cones and pine needles that have accumulated on the windshield. We plunge and rattle our way through potholes full of brown water. A few snowflakes chase us as we roll east, scattered by the spring winds, melting in the spring mud. 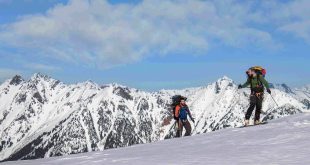 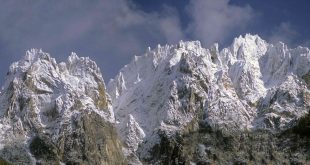