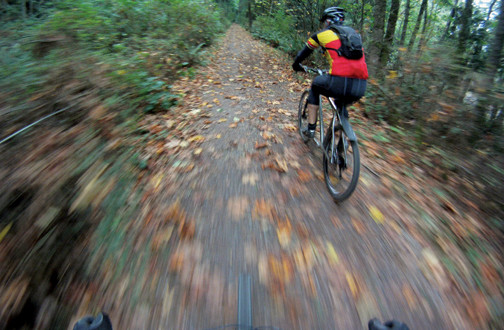 Story and photos by Mike McQuaide

“But tomorrow may rain, so
I’ll follow the sun”
– Lennon & McCartney

Depending on when you read this, that rude saucy lass named Autumn is here or on her way. And with her, she bears gifts of spit-in-your-face rain, mud by the bucket load and gloom-filled skies of perpetual gray.

As an avid cyclist of both persuasions – road and mountain – this pisses me off. More than a little. I’m loathe to let go of the golden, seemingly endless days of summer riding. Rides that ooze of perpetual youth and playfulness, of spinning the legs sans shoe covers, leg warmers, rain caps and the like.

It’s not so much that I don’t like fall as much as, … actually, no, I don’t like fall. Not at all. I wish Autumn would pack up her things and go back to where she came from.
Oh well, no matter. Fall happens every year so I’m used to it. (Sorta.) Besides, there are places not too far away where summer’s grip hangs on for just a bit longer and where it’s possible to squeeze in a few more good-weather rides.

Winthrop (Methow Valley)
With its Old West vibe – vintage 1890s storefronts, wooden sidewalks, hitching posts and the like – Winthrop has a knack for nurturing one’s inner cowboy. (And cowgirl and cowchild too.) A knack, too, for being sunnier and drier than the west side of the Cascades, with countless miles of trails meandering up and down the nearby hills, dales and valleys, it’s a great big slice of nirvana for us fall-phobic mountain-bike types.

Plus, it’s got the alpine larch trees, those amazing conifers whose needles turn from green to yellow – usually sometime in October – and thus transform the forests into blazing displays of mountain gold. But that’s a little higher, generally on the eastern slopes of the Cascades above 5,000 feet. Luckily, the Methow is a road-biking nirvana as well, with several paved roads that head for the gold in them thar hills.

Here are a couple of suggestions:
Falls Creek Road – From Winthrop, head north on Westside Chewuch Road for about 11 miles to Forest Road 5140, also called Falls Creek Road. Turn left and climb, climb, climb as the narrow, paved mountain road gains 2,800 feet over the next 11-plus miles before ending high up in Okanogan National Forest. Ogle (or is it oogle?) stunning views of larch-clad Big Craggy Peak and Isabella Ridge as you reach the turnaround point.

Washington Pass from the East—Lots of Westside folks make an annual west-east Highway 20 pedaling pilgrimage over Washington Pass and down into Mazama and beyond. If you’re already in Winthrop, however, consider an eastside approach climbing to that great big hairpin turn in the sky just below the awe-inspiring Liberty Bell massif. (Even more inspiring when the larch have turned.) Turn around at the pass and Wheee!, it’s all downhill for almost 20 miles back to the Methow. From Winthrop, it’s a 60-mile out-and-back with 4,800 feet of climbing; from Mazama it’s 35 miles with just a little less climbing.
(Note: After Labor Day, Highway 20 traffic is far less busy than in summer.)

Wenatchee
Staying with the east-of-the mountains theme, Wenatchee is one of my favorite spots to follow the sun and hang on to summer. That’s because of its claimed 300-day annual allotment of sun and its stunning setting on the mighty Columbia River at the foot of numerous huge dry hills and ridges: Badger Mountain, Jumpoff and Mission Ridges, Sage Hills, et al.

As in the Methow, myriad roads and/or trails head up into them thar hills inviting two-wheeled aficionados to have a climb and get rewarded with a big-time view of the entire Wenatchee Valley. But it’s not just climbers who are rewarded. The Apple Capital Recreation Loop Trail (that’s a mouthful) is a paved, mostly flat, 10-miler that explores both sides of the Columbia River and is perfect for families and/or the hill-phobic. Pick it up at several riverside spots in Wenatchee including Wenatchee Confluence State Park and Walla Walla Point Park or, on the East Wenatchee side, at the 27th Street and 19th Street trailheads.

For some mellow, cross-country type mountain bike trails, make for the Wenatchee Foothills Trails, accessible by following 5th Street east to Number 1 Canyon Road in Wenatchee. Here you’ll find a fun network of singletrack trails contouring up and down across the mostly treeless shrub-steppe foothills. Tree-less means a couple things: fantastic panoramic vistas of the Columbia River and its environs pretty much the entire way, but also the potential for wind and, depending on when you visit, heat.

In the mood to tilt at a big-league, Mount Baker-esque road climb? Head for Badger Mountain Road on the East Wenatchee side of the Columbia. The shoulder is wide, the pavement smooth as glass, but there’s no getting around that it’s a spot-of-bother maker as it climbs some 2,800 feet in 8 miles. But the rewards are as huge as the effort it takes to get there. See previous mention re: panoramic vista of the Columbia River valley (albeit from the other side of the river) but now add views to Ronsen Ridge, the Wenatchee Mountains and seemingly the entire Central Cascades, no doubt now frosted with the season’s first snowfalls.

Orcas Island
Closer to Whatcom County, the horseshoe-shaped San Juan Island that is Orcas is blessed to be in the Olympic rain shadow and as such, receives about 25 percent less rainfall than Bellingham. Road cyclists eager to spin some fall road miles into their legs can park their cars at the Anacortes ferry terminal and save about a bazillion dollars by taking the ferry to Orcas as a bicycle passenger. There, with summer crowds gone, you’ll have the island seemingly to yourself and be able to crisscross its numerous rolling country roads past llama farms, artists’ studios, open fields and forests without worrying too much about car traffic. (‘Cept maybe when the ferry’s just landed.) Off-season, the pace in not-at-all-bustling Eastsound, the island’s charming main town, seems even less hurried.

Get your climb on by heading to the top of Mount Constitution – the 2,409-foot high point (literally) of spectacular Moran State Park – for perhaps the most scenic best-of viewpoint in all the Northwest: Jewel-like islands by the dozens, jagged peaks and snow-capped mountains, deep darks forests and lots and lots of water.

Moran State Park brings us to mountain biking as well. Already a fun place to put fat tires to trail, Moran opens up about a dozen more miles to mountain bikes come September 15. Included are some of the park’s most scenically spectacular (and challenging) trails including Twin Lakes, Cold Springs and Little Summit, which follows the spine of Mount Constitution’s ridgeline. They’re heavenly ribbons of dirt that slalom through lodgepole-pine forest and alongside peaceful mountain lakes, marshes and stunning waterfalls. Seriously, it’s bomb-worthy stuff.

Whatcom County
Of course, another option is not to go anywhere. To quit whining about fall’s crummy weather, break out the foul-weather gear and just make the best of it. Which, as happens every year, I’ll no doubt do. I’ll mountain bike Galby and the Chuckanuts, relying on the trees to sorta somewhat protect me from the elements. I’ll throw down at a cyclocross race or three, and have great fun immersing myself in that type of riding that embraces the worst weather.

I’ll make the best of it. And at some point, usually around Thanksgiving or so, I’ll even begin to accept that summer is over. Acceptance begets strength, I’ve found, and soon enough I’ll find I have the strength …

… to begin counting down the days ‘til next summer.