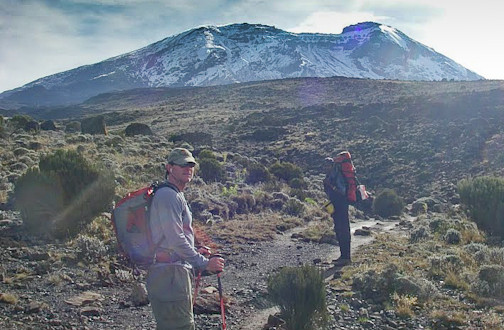 Story and photos by Dave Mauro

They had warned me to not leave anything out on my balcony.

“The Baboons,” the man at the front desk explained. It was the first day of being on safari. The Kilimanjaro climb was behind me now, and I had time to think about what went right, what went wrong. I sat out on the tiny balcony of my hotel room, sipping a can of Coke and playing back specific moments. The Lake Manyara National Park stretched out green and lush below me, but I scarcely noticed. As evening came I went inside to avoid the mosquitoes. Almost immediately a large baboon leaped down from the roof onto my terrace. I watched with curiosity from behind the glass door as he moved about looking for anything to eat, anything to take. At one point he bumped the table my empty Coke can was resting on and it fell noisy to the floor. This startled the beast. His teeth shown and the hair on his back raised skyward. Uncertain of what had threatened him, he took the safe route and decided it had been everything. The baboon then set about rearranging the heavy iron patio furniture with an economy of Feng Shui. I was horrified, but could not stop laughing. It was a much-needed cathartic moment.

A few months after summiting Denali in 2007, I decided that I would attempt Kilimanjaro in January of 2008. I had seen it listed as one of the Seven Summits, and though I had no intention of pursuing the entire list,  Kilimanjaro stood out, along with a few other names, as being a good deal easier than the mountain I had just summited. I was in the mood for easy after the toils on Denali. But more so, Kilimanjaro called to me. I dreamed about it, found it sneaking into my thoughts.  In the vague spiritual sense that typifies my kind I felt, I am supposed to go there.

I spent the next 5 months training, with the dual objectives of shedding as much upper body mass as possible while building lite-strength in my lower body, or “Badger Legs” as I called them.  Kilimanjaro is a “portered climb”, so I would carry no more than my lunch and a change of clothes.  Thus any additional muscle mass would be dead weight and likewise compete for scarce oxygen. I had to completely transform from the body-type I had built carrying heavy loads on Denali. Weight lifting was the first thing to go. Salads became the only lunch I knew. I wore a groove in the Pine & Cedar Lakes trail. I spent so much time on the Stepmill that it felt strange to not be going uphill.

A few weeks before the climb I received a team list from my Guide service, Adventure Consultants of New Zealand. I would be climbing with Brian (of Michigan), Richard (a Physician from Alberta), and our Guide Ang Dorjee.  At that time Ang had summited Everest 14 times while also leading clients to the top of the world on Everest. But he is best known for the heroics he displayed on May 18, 1997, and is featured in Jon Karakauer’s Into Thin Air, which recounts the tragedies of that day. I met Ang in the lounge of our jungle lodge. He was pleasant, warm, and soft spoken in the manner of most Sherpa people. I did not want to ask him to relive the experiences of that horrible day, but Brian broached the topic and Ang was fine discussing it. It seemed clear he was still haunted by his decision to leave Beck Weathers for dead.

We set out on the Machame Route the next day. A local Guide was retained to manage camp operations and the 19 Porters we were required to hire. Such manpower was embarrassing after Denali. We looked like an invasion force. But this is how the government of Tanzania employs it’s people. Soon enough we spread out on the jungle trail and it was just our team, chatting and pointing at monkeys overhead.

Machame camp marked the end of day one. We had gained 3,937 feet. Our tents were set up in a small jungle clearing that looked off to the south. We hung our clothing, wet from the the intermittent rains, on branches all about camp and watched as a full yellow moon rose to the east. I lay in my tent that night, listening to the jungle all around us. I felt good, excited. We were climbing in Africa.

We broke above the jungle that next day, rising to 12,467 feet and the moonscape of volcanic pumice that is Shira Camp. The Machame route bites off a large piece of altitude gain in the first two days, but then traverses the southern flank of Kilimanjaro for the following three. The trail teases higher at times, but never camps there. This allows for ideal acclimatization and goes a long way toward explaining the high success rate of climbers on this route.

The team pressed on to Barranco camp, 12,795 ft, the next night, then proceeding to Karanga camp, 13,123 ft, the day after. We trekked through rocky landscapes littered with prehistoric-looking succulents. The sunrise each morning was magical. By this time the team had become quite familiar and we joked with one another as we moved up the trail.

There is one main High Camp on Kilimanjaro. This is where the routes all converge to then launch their summit bids. Barafu Camp, 15,091 ft, sits on the eastern flank of the mountain. From there one can see out over Kenya to the north and east, Tanzania and the Serengeti to the south. The vastness of it all is powerful. We ate an early dinner and retired to gather what sleep might be had before leaving that night for the summit.

Brian and I lay awake in the tent we shared, talking about the very different paths that had led our lives to this place. His path involved a stint in jail, mistakes with debt, and the remaking of himself with the help of a wonderful woman who had come into his life.  Brian had worked three jobs, including a newspaper route, to get completely debt-free. But the dream of climbing Kilimanjaro had beckoned and, with his wife’s blessing, they had again gone into debt to finance it. He wondered aloud if it had been the right thing to do. “There isn’t much in this life that can’t be lost, taken away or worn to dust by time,” I started, ”but the fact you stood on top of all of Africa? That can NEVER be taken away.”  A shy smile came over his face. “Yeah, I guess you’re right.”

We left high camp at 1:00am with headlamps on.  The summit bid for Kilimanjaro is best done at night. Cooler temperatures solidify the steep scree that makes up the final 1,000 feet of climbing. Richard began to struggle with the thinning air after a few hours and gave up his pack to an assistant Guide. He did fine after that. I found myself feeling light-headed at one point, then noticed I was needlessly swinging an arm, burning oxygen to no profitable result. I ceased the unnecessary motion and felt better soon thereafter. But Brian was wavering on the trail ahead of me. Ang, who walked in tennis shoes beside us, noticed Brian struggling and moved up to flank him. At each successive rest stop Ang checked in with Brian while we forced down energy bars and drank fruit punch Gatorade. By the time we reached the false summit, Gilman Point, at the east edge of Kilimanjaro’s massive crater, Brian had Ang on one side and a local guide on the other. A big man, I doubted either guide could do much if Brian fell over.

Ten steps from the monument that marks the summit of Kilimanjaro, Brian called out “Ang” and collapsed, vomiting red Gatorade in the snow. At the time I thought it was blood. I was very concerned.  We helped Brian to his feet after the retching ceased and walked him the remaining few paces to the summit. Pictures were taken, then Ang sent Brian down immediately with one of our local guides. Snow was falling all around us, illuminated orange by the breaking dawn.

I called my family on the satellite phone, released a bit of my brother’s ashes into the wind, then started down with Ang and Richard. We came upon Brian lying by the side of the trail a few hundred feet below Gilman Point. The guide accompanying him was standing by, unsure of what to do. Richard, a physician, diagnosed cerebral edema (fluid building in the brain) and administered a dose of dexamethasone. We waited.

Twenty minutes later Brian was able to stand on his own and, as we descended, improved significantly. But we feared a relapse, so the team broke camp once down to Barafu and descended the whole of Kilimanjaro. By the time we reached camp at the mountain’s base, we had been on the move for twenty exhausting hours. I felt like a stumbling beast incapable of higher thought.

But Brian was safe and we had summited Kilimanjaro! After reaching the highest point in North America the previous year, I had made it to the top of Africa

This is the second in a series of seven stories by Dave Mauro, each describing the ascent of one of the “Seven Summits”; the highest points on each continent. Next up: Elbrus

Dave Mauro is a longtime Bellingham, WA. resident. By day he works as a financial advisor at UBS. By night he is an improv actor at the Upfront Theatre. Now and again, he travels the world with the goal of climbing the highest summit on each of the planet’s continents. Follow his quest at www.AdventuresNW.com