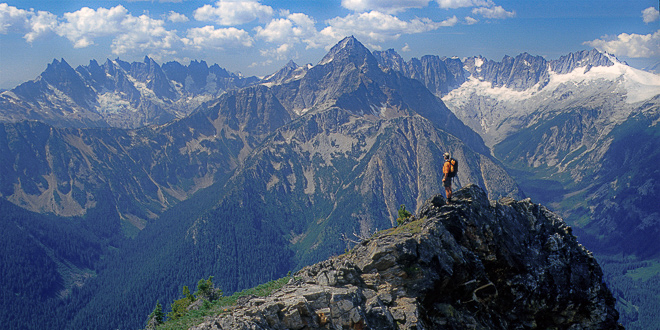 Far Above the Beaten Path: In Praise of the Alpine Traverse

My heavy boot balances on a small ledge just below the crest of the knife-edge ridge. Before fully weighting each step, I check my footing by gently tapping the rock. A misplaced step or broken hold would send me tumbling down the cliff. With a 70-pound pack throwing off my balance, I strain to move without tipping sideways. Finally the exposure relents and I step onto more secure ground. As the tension eases momentarily, I take a deep breath, but I know that more anxious sections of terrain lie ahead.

When I first moved to the Pacific Northwest I was awestruck by the natural beauty. I  pursued adventures in the common locations frequented by the masses of tourists. Queuing up for summit bids on the volcanoes or the classic climbs on Forbidden and Liberty Bell peaks was satisfying for a few years but in time these left a sour taste of what could have been a wilderness experience. From these lofty summits I gazed longingly at the ridgelines extending far to the horizon. Countless peaks etched their silhouettes against the haze caught in the valleys. With a siren’s call they beckoned to those who wanted real wilderness adventure.

For five days our group of four has seen no one. We are only 100 miles from the metropolises of Seattle and Vancouver, but we are experiencing an isolation more exclusive than most of Alaska. The scenery surrounding us includes deep valleys of old growth forests, alpine meadows full of floral mosaics, and glaciated peaks holding a lifetime of challenges. Where is this paradise? It is found in the North Cascades of Washington State.

For a few weeks of each of the last 25 summers I have coerced my wife Karen Neubauer and a group of friends into traveling the remote ridgelines of the Cascades. These “Cascade Traverses” are invented paths that connect lowland trails with the wildest and least-traveled ridgelines in the range.

The goal of each traverse is to stay above tree line for as long as possible to maximize the stupendous views. In many respects the Cascades are not as friendly as the Sierras or Rockies. The range has more peaks that rise 3,000 feet in the last horizontal mile to their summits than any other range on earth. Although that trivia has never appeared on Jeopardy, my knees and back acknowledge that our Cascade trips are more arduous than adventures made in other ranges.

The long approach on an old-growth trail dulls the mind and the inevitable four- to five-thousand foot climb up a torturously steep hillside through a tangle of alder and thorny Devil’s club challenges the group’s resolve. Swarming mosquitoes, biting black flies and stinging ground hornets add to the misery. Needles, dirt and duff slide between the pack and back. Rain adds weight to an already unbearable burden and sweat streams underneath rain gear that never really breathes. Boots and packs rub, creating blisters that throb with each uphill step. Progress up these densely vegetated slopes is made by circumventing mossy cliff bands and pulling oneself up branches of slide alder. For those experiencing these rights of passage the first time, the ordeal can break the spirit and bring tears; but for the seasoned backcountry traveler, the effort is akin to finding the Rosetta Stone that solves the puzzle of getting to the sub-alpine zone.

The original goal to venture into the heart of the Cascades was pursued by pioneer climbers seeking first ascents of remote summits. In 1938 four young men from the Ptarmigan Climbing Club bushwhacked into the deep valleys surrounding Dome Peak and traversed to Cascade Pass in a 13-day effort that was not repeated for 15 years.

The first audacious south-north traverse of the Picket Range was accomplished in bare-bones style by Alex Bertulis and Half Zantop in 1963. This 10-day epic, done without a tent or stove, crossed jagged terrain and included a 2,000 foot descent of the north face of Mount Terror by a series of rappels.

Joe and Joan Firey and friends made annual excursions into deep hanging valleys and along airy ridgelines tagging elusive summits en route and Frank King organized summer outings with the Seattle Mountaineers for traverses through the Glacier Peak Wilderness as well as the North Cascades National Park.

A north-south linkage from the Canadian border to Dome Peak was accomplished by Don and Natala Goodman in a 26-day trip in 1990. The length of this trip necessitated a pre-placed food cache, two food drops at trailheads, and a dropoff/pickup which avoided a horrendous car shuttle.

Once above the hemlocks and firs, the travel holds more visual rewards but flat ground is a rarity. At times the side-hilling can be pleasant, but the footing can never be taken for granted as marmot holes and roots can snap an unwary ankle. As the slope angle increases, clinging onto slippery vegetation is the only way to safely cross the steep alpine meadows. The weight of the pack, loaded with necessary ice axe, ropes, and crampons, causes each step to be a major effort. Slips, slides, and tumbles are common events, but throughout such hardships one can simply stop, take a deep breath, and gaze up in amazement at the surrounding world-class scenery. The spirit found in the “Sound of Music” does indeed exist as serrated ridgelines and glistening glaciers extend to the horizons, but the vision of Julie Andrews skipping through the meadows seems absurd as we labor across the sloping terrain.

Information on the exact paths of Cascade traverses has been historically difficult to find.  My inspiration for these remote areas came from the classic black and white photos in Tom Miller and Harvey Manning’s book, The North Cascades.  This out-of-print volume, published by the Mountaineers in 1964, lobbied for the creation of the North Cascades National Park. Two geologists, Roland W. Tabor and Dwight F. Crowder, published accounts of their scientific rambling and peak bagging in two Routes and Rocks volumes. Fred Beckey’s alpine guides hold most of the details if a reader reads carefully. A relatively recent addition to Cascades literature is found in the inspirational writing and photographs in James Martin’s North Cascades Crest.

With the advent of on-line forums such as NWHikers.net, details and photos of high routes have made the task of route-finding less of a mystery but no less arduous of an endeavor.  Numerous hiking guides for maintained trails are available but a traverse guide does not exist and many avid Cascade hikers are adamant that such a guide should never be written

The route of each traverse is unique to the travelers who choose it. The scope of the adventure is often conceptualized during the gray rainy months of long dreary winters when restless bodies and minds search for vicarious challenges. The trials of past escapades are forgotten in the retelling of prior trips and viewed images inevitably show only sunny skies and the killer views absorbed while lounging around campsites. Friends must be persuaded to allocate part of their precious vacation time for a trip that will test their will. The window of stable weather necessary for success can be as frustratingly brief as a couple weeks in August, or may last from late June to early October. As the group scans the topographic maps, analyzing the steepness indicated by overlapping contour lines, a thin pencil line is drawn to mark the intended route and the commitment is made. Anticipation of future views across alpine meadows towards glacier-covered peaks makes the tedium of hours of training more tolerable.

Our tents are perched on a cornice left from last winter’s snow. It barely clings to the lee slope of the col and provides the only semblance of flat terrain we have seen in the last five hours of arduous travel. The warm August heat may release this overhanging snow in a few weeks but for now it provides a wild aerie from which we can view our place in the universe. After a strenuous day of kicking boots into the rocky side-hill, our legs are exhausted and we welcome the thud of our packs dropped to the ground. “Home” is a strange concept when it constitutes a nylon tent resting on an ephemeral snow patch. Sleep comes quickly as fatigue pushes thoughts of tomorrow’s hardship to the deep reaches of our minds.

With each trip we have gained a more complete understanding of the intricate peak and ridge systems of the Cascade range. Memories of sublime moments as well as brutal hardships bring a sense of accomplishment as we scan the horizons following paths covered in prior years. On rare occasions we meet other groups in these off-trail excursions, usually either Outward Bound or National Outdoor Leadership School courses. The desire to undertake these trips comes from the deepest craving to visit seldom seen, truly wild country. In the middle of each traverse comes an anxious moment when we are not confident of a clear path out. The uncertainty of success and the adrenaline created by our anxiety add a mystical (and addictive) quality to our quests. There is an unspoken bond among the group built on the recognition that a successful completion of the traverse is dependent on the strength and determination of every person. The overall experience is always defined by more of a we than a me psychology.

A traverse is a marriage without divorce, the crossing of a moat where the drawbridge pulls up behind. One can explore either end of a traverse on a long holiday weekend. It is the middle half of any traverse that is summed up in the single word: “commitment.” A point is crossed when the uncertainty of what lies ahead is less daunting than retracing steps. A door is closed, a curtain dropped and a longing glance back seems unwise. The moment is marked by a quickening of steps as adrenaline, fueled both by exhilaration and anxiousness, flows into the bloodstream. The pulse quickens and a deep breath is taken. From here forth, looking ahead is the only option forcing decisions that propel the group’s momentum towards the ultimate uncertain course of a true adventure.

With cosmic rhythm, the sun sinks in the west. Countless ridges and summits become sharper with the oblique light casting dark shadows into the deep valleys. Coolness descends with the twilight and puffy jackets are zipped to hold in the day’s warmth. Mounts Baker and Shuksan stand as sentinels blocking the view of the shimmering waters of Puget Sound. The crescent moon dips into the magenta horizon and stars poke holes into the dark heavens. Our group stands in silence, physically weary from days of travel. Each of us lets our thoughts drift out over the endless view. Tomorrow’s adventures are unknown, today’s are now history, and the present is … unspeakably beautiful. 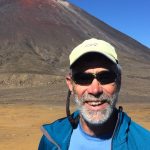 “Looking at life as always an adventure” sums up Bob Kandiko’s philosophy. Retired after 33 years as a middle school science teacher, he now has endless time to plan and execute trips with his life companion, Karen Neubauer and friends.  His latest embraced quote, “Remember to stop so you take the time to stop to remember.”