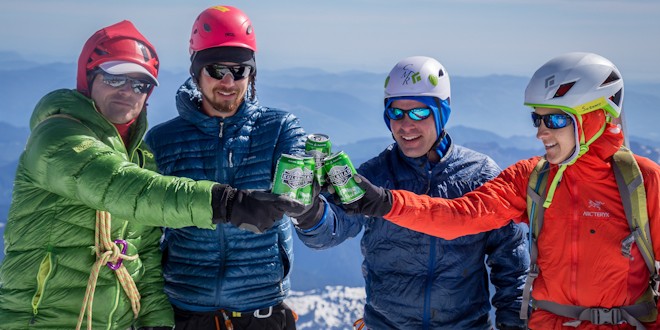 Going the Distance: Bellingham Bay to Baker – and Back

The journey really began nearly a year ago when I didn’t complete the 108-mile never-been-done-before run from Bellingham Bay to the summit of Mount Baker and back on foot. Bad weather didn’t permit a summit attempt that day but three runners had success a few weeks later.

Dan Probst, who has spent the better part of the last three years advocating for a 108-mile roundtrip footrace from the Bay to Baker’s summit in an effort to resurrect the original Mount Baker Marathon, invited me on  this “speed attempt.” I accepted, but not without hesitation. I vaguely knew the mental games the 100-mile racers talked about – but not to the extent I would come to experience firsthand after 30-plus hours of running and two skipped nights of sleep.

We started running at 8 p.m. on June 5th. The distance flew by as we maintained a sustainable pace.  We ran along North Shore Drive, then over Stewart Mountain via logging roads into the middle of the night, leading us into Acme. My knees welcomed the change to flat terrain and my mind welcomed the change of scenery – even if it meant running on pavement again.

We weaved around Mosquito Lake Road and arrived at logging road 38. Between 3 and 4 a.m., I started to notice a gnawing pain in my right knee. My fear of having to quit was worse than the pain itself! I continued and my pain subsided. Little did I know at the time, everything would hurt later.

Around 6:15 am, we arrived at the Ridley Creek trailhead. To our delight, Ryan Rickerts stood beside his truck drinking a beer and had peanut butter and honey-glazed bacon waiting for us. Bacon, sunlight, and getting onto a real trail brought us inspiration. Even though the thought of a beer had sustained my last 10 hours, in reality I could barely stomach one and could only down half a can.

We got organized and headed up the Ridley Creek trail where the steep single track was a breath of fresh air. Everything felt good. High on Baker’s west flank now, we came to the snow line where there was a perfect breeze, keeping the temperature cool.

As we were approaching the climber’s base camp at the foot of the Easton Glacier from below, our 11 support climbers cheered wildly and then suddenly, in a synchronized line, mooned us. What a welcome! As we climbed the last hill to approach them we ran into the backside of one of our support team women peeing. She noticed us and sheepishly laughed. Little did I know at the time, over the next 10 hours on the mountain, I would get used to the humbling no-shame experience of peeing between two men, roped in, with a 360 degree view all around me: nowhere to hide.

After cramming our faces with food, we geared up and roped in. I was energized, enthused, and anxious to summit. We climbed for 3-4 hours up the glacier before I began to feel fatigue.

Every step seemed to become more difficult – not the kind of challenge that comes from physical exertion, but more like a dreamy slow motion sluggishness. I literally couldn’t keep my eyes open. Since this was my first time running through the night, I had assumed that the adrenaline, excitement, and the constant conversation would keep me wide awake. Incorrect. I was falling asleep mid-step! I took a heaping handful of chocolate-covered espresso beans as Aaron offered me an espresso energy gel (anything with caffeine was a valuable resource).

We trudged on, finally reaching the base of the Roman Wall, the steepest pitch of the climb. I focused on Dan’s footprints ahead of me for optimal energy conservation.

The last stretch of the climb leading to the summit was cold, as we were no longer protected from the wind by the face of the mountain. Approaching the summit, we echanged high-fives and cheers. The view from the top was wondrous! The Sisters. Glacier Peak. Mount Rainer. The San Juan Islands. Far into the Cascades and beyond….

I breathed in the accomplishment and smiled to myself at the thought of my dad looking down on me, proud. He had been a mountaineer and outdoor enthusiast. The group cracked open cans of Kulshan IPA. One of our support climbers threw us a plastic pouch of vacuum-sealed bacon. We ate, drank, and got cold feet (It didn’t help that Aaron, Dan, and I wore only running shoes).

We marched down the mountain, our feet plunging into knee-deep slush. At base camp, we ate more (they sometimes call ultra-running an eating party, as it is vital to consume around 300 calories an hour). We reached the top of Ridley Creek Trail and panic began to set in. We were far behind schedule and no one had prepared to be in the woods at night – not a headlamp between us! We eased into a quick pace and made it back to the Ridley Creek trailhead about 10 minutes after dark.

A change of dry shoes and socks felt miraculous. I had a false sense of success, as if we were finished. It was nighttime. We’d been up all of the previous night. We had summited Mount Baker. But no – there was another 45 more miles to run! I chugged an energy drink, which I would later regret. Not only was my stomach burning, I became angry. This was the stupidest idea. Why would anyone in their right mind willingly make themselves suffer?

Wasn’t someone going to validate my negativity?

We were running again.

Then came the nap debate –  a 6-mile conversation about whether or not we would take a nap. I could have punched someone. We took our nap – 30 minutes. I was out in 8 seconds, and went to a far away place. When Dan woke us abruptly, I had no idea where I was. When I understood my reality, it felt like a nightmare. Careful not to whine too much, I grabbed another handful of chocolate-covered espresso beans and continued running on Mosquito Lake Road. My body suffered, but morning came and the dawn brought a new attitude.

Despite the pain from running with a layer of blisters between my feet and the concrete, the low fog in the early morning light over green pastures was a scene out of a fairyland that even one who was suffering had to appreciate. Later, when we were approaching the curve in the road that would bring us into downtown Acme, we saw the silhouette of a man walking in the middle of a lane toward us. It was 4:30 a.m. Someone thought he had a gun. No one spoke. As we approached him with a smile and a “g’mornin”, we noticed it was a bow and arrow. He did not make eye contact, smile, or even blink as we passed. Not sure if we should laugh, be horrified, or expect an arrow in the back, we entered Acme sharing a puzzling and surreal moment.

Before starting the climb back up Stewart mountain, I did a terrible tape job on my blisters and put on my hydration pack. We had 12 treacherous miles to go before we reached the Bellingham side of Stewart mountain. Sleep deprivation was getting to me so I popped a caffeine pill. I was eager to reach Stewart’s summit so our climb would change to a relaxed downhill jaunt. Wrong. The steep and rocky downhill nearly killed me. I was getting sharp and abrupt knee pains and my blisters were throbbing.

Once we reached the North Lake Whatcom Trailhead, we prepared for the next 13 miles of pavement to the finish. I drained my blisters and chugged a cup of lukewarm coffee while Dan bandaged and put mole skin on my blisters. He then took off his own shoes to find that we had nearly identical blisters that webbed between our toes.

Onward: the final stretch. My body was really suffering but now my mind was clear. Thirteen miles over North Shore Road and through Whatcom Falls Park. We continued through downtown and I felt like it was Christmas morning. I held back little cries in the last two miles. We were greeted by a throng of supporters as we ran knee-deep into the Bay. A bottle of champagne awaited us at the shoreline. My husband and dog greeted me and I couldn’t hold back. I broke down sobbing. Because I was done suffering, because I was physically and emotionally exhausted.

Because we did it.

On June 7, 2015 Dan Probst, Gavin Woody and Suzanne Lundberg (members of Probst’s Cascade Mountain Runners) reached Bellingham Bay after running 108 miles to the 10,781-foot summit of Mount Baker and back in approximately 40 hours. It was the group’s fifth attempt (since 2013) and the second to succeed (a group of three clocked a total time of just over 48 hours in August, 2014). Suzanne Lundberg is the first woman to successfully complete the round-trip.

Suzanne Lundberg lives near Bellingham with her husband and dog in their off-grid micro-cabin on the Lummi peninsula. She seeks adventure in every way possible whether it be ultra running, sailing, biking, backpacking, traveling, or speed-crafting in front of her wood stove. She firmly believes that each day has the potential to present a wild adventure, inspire a spontaneous celebration, or reveal a monumental epiphany.