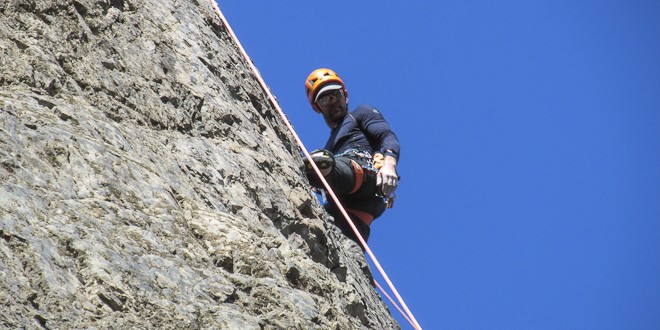 It is time once again to put down your latte and find your ice axe, climbing harness, and willpower – it may be summer break for the kids, but school is in session on Northwest mountains from the Alaskan Range to the Cascades and there is no better teacher than internationally respected  American Alpine Institute (AAI) of Bellingham, Washington.

This spring I followed four climbers on AAI’s first course of the climbing season to find out for myself why, as noted adventure writer Jon Krakauer claims, AAI is “the best all-around climbing school and guide service in North America.”

In the ever expanding universe of mountain climbing outfitters you find just two types – those that you pay to drag you up the mountain safely and those that teach you how to drag yourself up the mountain safely.  The American Alpine Institute is an example of the latter.  Climbers Dunham Gooding and Sheilagh Brown started the institute in 1977 with the core mission of training climbers to succeed on difficult peaks and climbs in the Northwest and beyond.

According to Jason Martin, operations director at AAI, what makes them different is their hard-working guides that teach numerous skills and concepts every day, despite sometimes difficult conditions.  Jason says, “Other companies teach their participants to depend on guides, our goal is to teach people to depend on themselves.” In addition to the extensive curriculum, Mount Baker provides a one-of-a-kind alpine climbing classroom that prepares climbers to face difficult routes on other mountains.

Sometimes overshadowed in the media and in Google searches by Himalayan outfitters like Seattle-based Alpine Ascents or the Whittaker brothers’ RMI Expeditions, AAI quietly continues to do the hard work of training guides and climbers that push the boundaries of climbing all over the world while logging first ascents right here in the Pacific Northwest.

Sean, 41, originally from New Zealand, came all the way from Hong Kong to study with AAI with dreams of becoming a big mountain guide and climber.  Sean says, “I do a lot of research and then I go to the best people to get trained, and that was AAI.”  Sean looked into programs in New Zealand, Canada, and the U.S. but he couldn’t find another outfitter that provided the same level of professional instruction on snow, ice, and rock.

The situation was a little different for Nic, a 29-year-old internal medicine doctor using his last few weeks of freedom before starting his residency in Boston to take a 12-day program from AAI. The program started with alpine snow and ice school on Mount Baker and rock school in the Methow Valley followed by another six days of advanced techniques and client-led alpine ascents.  Nic had used Rainier Mountaineering Incorporated (RMI) to climb Mount Rainer, but thought AAI provided the skills necessary to be a more accomplished alpine climber on his own.

According to Paul Rosser, a senior guide with AAI since 1996 with ascents in the Cascades, Rainier, and Denali; AAI is the premier schoolhouse – bar none – for training climbers. Paul talks about the “course within the course” at AAI.  For Paul, teaching technical skills is only part of the work needed to train a safe and competent climber. The other aspect of climbing is to mentally train climbers to deal with expectations, fatigue, fear, and enthusiasm.  Paul asks 18-year-old guide-in-training Sam, “What happens if you are guiding clients that are all friends and one of the party wants to go back and the others want to push a summit attempt?”

According to Paul, the mental aspect of climbing is often the most important skill to develop and the hardest to teach. Dealing with the psychology of climbing is something that only experience can teach.  Paul teaches the course within the course during Zen-like pre- and post-climb discussions and at critical points along the climb, where each situation creates a teachable moment.

Besides comprehensive climbing programs in the Cascades, AAI also conducts courses in Alaska, California, Colorado, Nevada and 14 worldwide locations including Africa, Antarctica, and South America. Guides for AAI were responsible for opening up the Andes in the 70’s and establishing many new routes and first ascents.  For those looking for an old-school alpine expedition,  Paul suggests AAI’s 21-day assault on the West Buttress of Denali. Climbers establish four camps ranging from 7,800 to 17,200 feet before attempting to summit North America’s tallest mountain.

Bellingham, by virtue of its proximity to some of North America’s finest climbing terrain has a well-established community of climbing guides and instructors.

The Bellingham branch of The Mountaineers offers instructional courses, opportunities to climb and socialize.