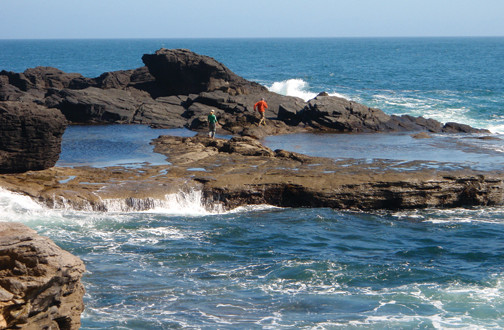 The Coast is Clear: Hiking the Juan De Fuca Trail

Story and photos by Laural Ringler

Don’t try this at home,” I felt compelled to tell my teenage son, as we both stuck out our thumbs to hitch a ride from the coast of Vancouver Island near Port Renfrew back to Jordan River. Thus commenced our family hitchhiking competition. My daughter and husband were one team, my son and I the other, having split the family up to optimize our chances of rides back to the trailhead. After 47 km of backpacking the Juan de Fuca Trail, we were five days on the other side of our last showers and hoped to get back to the car in time to catch a ferry and head home yet that night.

With a teen and a preteen, the trip had begun with negotiations. No longer can the parents plan everything, hand them a packing list, and have everyone interested and motivated. “Biking, backpacking, or kayaking?” was my first question. Dana was up for anything but had already done a kayaking trip with me that summer. Noah said, “not biking.” So I started researching backpacking options.

Dana and I had planned to hike the West Coast Trail on Vancouver Island the previous summer, but had cancelled when she got sick. That extremely popular trail has a reservation system and significant transportation logistics, including ferry reservations to cross the Nitinat Narrows and the Gordon River. The Juan de Fuca Trail, which traces the island’s coast just to the south of the West Coast Trail had none of those. Juan De Fuca it was.

So we loaded our backpacks, caught a morning ferry from Tsawwassen to Vancouver Island and drove to the trailhead at China Beach. We paid our backcountry camping fees and hit the trail, winding through the cool forest towards the water. At Mystic Beach, campsites were tucked up above high tide line, behind drift logs, or even a little farther into the bushes or trees. We found a site up the beach, and after a quick tent- pitch and kitchen set-up (one kid does each and they swap every night), the kids were free to play on the beach. With sun and sand and dramatic northwest rock, they built castles and drew in the sand, and we explored a wide, tumbling waterfall on the south end of the beach. We’d only hiked 2 km, but already felt a world away from the day’s car ride.

The next morning was softened by fog, the beach felt lonely, and we were happy to pack up and move on. Post oatmeal, we headed into a 19 km day, which would include what was billed as the most difficult section of the trail. 7 km in, Bear Beach consisted of wave-smoothed boulders that we alternately hopped over and walked between. The rocks were varied, beautiful marbled greens, or grays mottled with black. This point marked the first beach cut-off, with a second route option for when the low path would be impassable at high tide. The tide was low for us though, so we chose the beach scramble ankle workout, and snacked at the far edge of the section. In between cracker and cheese bites, the kids threw rocks into the water from the mini-bluff where we’d dropped our packs. The sun had come out, the waves crashed on the rocky shore, and we felt lucky to be out.

Fueled up for what our map labeled the “most difficult” section, we continued on. The terrain was incredibly varied: soft sand beach, rock slabs, rocky beach, dirt trail, log trail or boardwalk weaving in and out of trees, and all of it up and over or around headlands. The log trail sections were huge trees notched for sure footing, sometimes in connected sections that had you walking one to another to another – ten feet above the forest floor – through and above a jumble of fallen trees. We felt small. And decided “most difficult” meant most undulating.

Every thirty- to fifty-foot vertical climb was followed by a similar down-climb minutes later, as we navigated dozens of drainages. The ascents and descents were on notched trees, laddered steps, actual ladders, and sometimes deployed a splintery rope to hold onto while your feet sought purchase on dirt or smooth, wet rock. When we stopped for lunch, I noticed Noah had already eaten half of the snacks I’d given him for the next three days. Teen guy was hungrier than I’d planned.
We were glad to reach our day’s destination at Chin Beach and relax. The kids built sand and stone cities across expanses of beach, and later raced around defending them when the tide came in. Tom and I lounged in the sun and admired their architectural feats.

With only 8 km to Sombrio Beach the next day, we had plenty of time when we got there to explore. Green water-worn rock walls three times our height twisted away from the beach. The occasional fern frond growing from a tiny rock ledge waved in the breeze created by a waterfall. The slot canyon narrowed to a couple of pools and then yet another waterfall – cold, clear, and misty-white.

We had encountered one suspension bridge between Chin Beach and Sombrio, but the next day we crossed two more, high and wide metal structures above leafy forests. Sometimes the kids dropped their packs and went back across to experience the height and sway a second time. Teen guy was still eating a lot, and hiking strong in his jeans. Tom and I cut back on our food and handed it to Noah.

Our final night at Payzant Creek was high above the ocean in the forest. After the exposed beach camps, it felt strange. We sought out open space near the water so we could eat dinner watching the crash of the surf. The rock consisted of vast slabs of water-sculpted jaggedness, and looked like volcanic Hawai’i.

The next morning, we hiked the final 7 km to Botanical Beach and found crowds of people wandering among the rocks, studying the prodigious tide pools. There were families with small kids and floppy beach hats, seniors with walking sticks, and we heard “Look!” and “Come see!” in a jumble of languages. We stashed our packs and joined in.

I was looking at barnacles and limpets in a particularly large pool when a tentacle waved at me from behind leafy green seaweed. It took me a few seconds to register suction cups, and my brain to think, “Octopus!” I didn’t want to yell and scare it, so I glanced sideways for my family and gestured them over. The tentacle withdrew. But then it reappeared and the entire animal glided towards me, reddish and huge. I felt the members of my family breathing next to me, silently watching the cephalopod. None of us called out. The octopus’ two or three foot body became a little oranger and plumper, then it continued its cruise around the pool, and disappeared behind the seaweed. We continued to explore the tide pools, but nothing was as magnificent as seeing a Giant Pacific Octopus in the wild.
We had lunch and then debated which people looked approachable for a ride back to our car at the trailhead. Tom found a trio of women who were day hiking and had decided to switch trailheads – they could take two people halfway back. So after we outlined the “whoever-gets-to-the-car-first-wins” concept, he and Dana took that ride and Noah and I walked to where the parking lot meets the road, thumbs out.

Immediately, a van pulled over. A local native couple invited us in, their van a jumble of possessions and a big old dog. We balanced on the edge of the bench seat with the dog and they took us into Port Renfrew and dropped us at the main intersection. I told Noah to look friendly and adoptable and we stuck out our thumbs again. Nothing for twenty minutes, then a father and his ten-year-old son pulled over. We’d seen them on the trail the last day, and they were headed to Victoria so they could take us the entire way. Yes!

Highway 14 was a blacktop version of the Juan de Fuca trail, all ups and downs and curves. I sat in back, thankful for the ride and wondered how Tom and Dana were doing. And then I saw them standing on the side of the road. I registered Dana’s smiling face and jaunty hat and thumb, and my first thought was “how could no one pick them up, Dana is so darn cute!” My second thought was that we had to pick them up. I yelled to our new friend, and he pulled over. We crowded four in the backseat and continued on to our car.

It was hard to determine who won the competition, though. A tie? Or did Noah and I win because the other two came into the ride after us? Or did the footrace in the parking lot to touch the car first determine it? If so, Noah and Dana won. 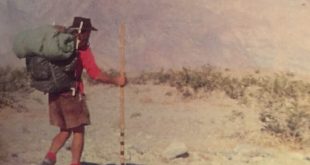