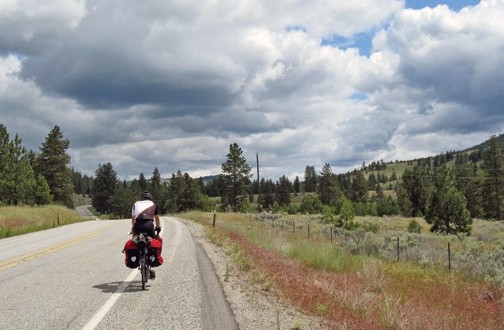 Story and photos by Lisa Toner

Soggy clouds lingered over Bellingham Bay and remnants of the morning’s downpour clung stubbornly to pavement and grass. Huddled on the beach at Marine Park, we realized that we could put it off no longer: It was time to pedal into the unknown.

We said goodbye to my parents, mounted our fully loaded bicycles, and began riding awkwardly through the park. A group of cricket players paused as we tottered past. “Where are you going?” one called out. “Yellowstone and Glacier National Parks!” we replied, feeling a bit surprised by our own response. Grinning, they began to clap, whistle, and cheer. Buoyed by their enthusiasm, smiles spread across our faces. Our pedal strokes strengthened and our barge-like bikes steadied. These cricket players would be the first of many consequential strangers on our two-month, 2000-mile bicycle journey, a trip that became a series of meaningful encounters and instant camaraderie with the people we met along the way.

Our route crossed Washington on magnificent Highway 20, which has five mountain passes. We quickly learned to tour through challenging terrain on a starving student budget, cooking our own food, finding legal free camping, and requesting homestays through www.warmshowers.org (a hospitality network for touring cyclists).

In Winthrop, we had our first warmshowers stay: a campsite with tent space, a converted shed for bad weather, a garden, and even a solar-powered shower! We met other touring cyclists, leapfrogging with five guys biking from Portland, Oregon, to Portland, Maine and chatting with a group of men in their seventies who were nearly done with a Transamerica journey. They recommended a good shortcut and gave us tips for fending off dogs. Even people at the grocery store were friendly. We began to see that people generally love touring cyclists. They were eager to help, ask where we were going, and gawk at our overloaded bicycles.
Before departing, we had spent hours online, anxiously planning the first week of our journey. As we continued eastward, however, we became less reliant on technology and more connected with people and towns. We had no smartphone or computer; we navigated with only a map, notepad, and 20-minute internet sessions at libraries. This let us travel comfortably, but even when we had good plans, we often found something better by talking to people. In Tonasket, Wash, where the only campground was a $25-per-night RV park, the people at the visitor’s center said, “We always let cyclists camp on our lawn for free!” We met another cyclist there, a guy who lived only two blocks from us at home – we probably never would have met him otherwise!

In Northern Idaho, we met Beth, known on warmshowers.org as the “patron saint” of touring cyclists. She chases down cyclists to make sure they have a place to stay! Her kids idolize the cyclists and are already becoming avid bikers. The morning we left Beth’s house, we crossed into a remote section of Montana. We had no solid plans for the week’s lodging, other than campgrounds marked sporadically on our map. Towns were few and far between. It was time to let go and trust that something good would happen. Dodging rain showers, we cruised on a tailwind, following the Clark Fork River. We took a break at a country bakery, and my phone rang: it was Beth! She excitedly told us that her elderly parents, who normally didn’t take in travelers anymore, wanted to host us. They lived two riding days away. Plans for that night, however, were still up in the air.

As we approached 70 miles of riding, deep purple storm clouds loomed ahead. It was time to pitch the tent or get soaked. We reached a campground, but it was gated shut. “The campground is closed because the river flooded,” said a voice behind us. It was a man on a tractor. “But you can probably go in there anyway. Or, you could camp on my yard. I have 200 acres.” We took him in: well over six feet tall, he had an athletic build and a gray ponytail. His eyes were earnest and kind. “My name is Brett. It’s just my boy and me at home now. My wife passed away a year ago. You can camp on our lawn. Seriously, I don’t care at all.”
Soon, we found ourselves cooking burritos in Brett’s kitchen, joking around with his eight-year-old son, and sharing life stories. He told us several times how great it was to have people to talk to. There was nobody around for miles. The next morning, we took a photo together and rolled on, feeling like we’d known him for much longer than 24 hours. By stepping outside of the usual social convention of polite distance and fear of strangers, all of us had made a memorable connection.
We pedaled along the Blackfoot River, stopping for a night with Beth’s parents, who inspired us with stories of their full life. Continuing toward Missoula, the beautiful scenery gave way to busy highways. Exhausted, we stopped at a store 30 miles north of Missoula, far from any campground. A local approached us and struck up a conversation. Between repeated admonitions that cyclists should ride on the left side of the road, he mentioned a powwow, known as the Arlee Celebration. Then, he said the magic words: “You know, you can camp for free at the powwow.” And so, we spent the afternoon watching traditional dances and looking at elaborate costumes and crafts. Our modern, teepee-shaped Megalite tent looked tiny pitched beside the magnificent traditional teepees. The drumming and singing droned on through the night.

The next morning, we groggily biked up a short, steep pass and descended south into Missoula, where we relished the city’s bike lanes, shaded parks, and crowds of people. Errands at a bike shop, farmer’s market, and food co-op felt heavenly. We spread out our stuff on the university campus lawn to do some bike maintenance and cook dinner, planning to bike out of town to camp later that evening. Then, a cyclist our age invited us to pitch our tent on his lawn and have a backyard movie night with some friends. It turned out that we had mutual acquaintances in the cycling world, and we offered to host him when he came over for Westside races. As we drank wine, shared adventure stories, and laughed about the woes of graduate school, we realized that once again, our open-ended plans had led us to something better than we could have imagined on our own.

We pushed on toward Yellowstone, settling into a rhythm of planning our route loosely, contacting warmshowers hosts a few days ahead, and letting the rest fall into place. As dreamy as this sounds, there is a yin and yang to touring: For every nice homestay or beautiful free campsite, there was a healthy dose of what we came to think of as “type two fun”. This is the kind of fun that’s only fun when it’s over. Some examples: In a remote stretch near Helena, we camped on a sweltering high school baseball field amidst hordes of mosquitoes. The next day, we stayed with a friend’s aunt, who brought us to a Fourth of July Party and made a beautiful creek-side dinner with us. We found free camping on a visitor’s center lawn in Big Timber, but got “sprinklered” at 3:00 am. Sometimes, we had to ride on I-90, where the narrow, grit-covered shoulder and roaring semis made us tense with fear, but then merged onto a gorgeous frontage road.

After an eighty-mile day through unavoidable road construction and 100-degree heat, we arrived at a friend’s house for a rest day. Again and again, people showed us immense hospitality, more than we’d usually ask for, or felt comfortable accepting.

Kind strangers shone the brightest in the tourist zone in and around Yellowstone National Park. There, towns were friendly—if you could spend big money. Some places had no grocery stores, only expensive restaurants and souvenir shops. Many campgrounds banned tents due to bear problems. In Red Lodge, far from a campground and unable to find a shower for less than $15 each, we met a couple our parents’ age. They invited us to stay in their guesthouse. In Yellowstone, we found great $5-per-night hiker/biker camping, but no good grocery stores. Depleted from climbing an 11,000-foot pass, we descended to Gardiner, Mont, to get supplies, where we met a friendly postal worker. While stamping our mail, she told us that she had done a bike tour at age 19 and never forgot the kindness other people showed to her. She recommended the best place to get a bacon-and-eggs brunch, then drove us back up the sweltering, 1000’ hill to our campsite during her lunch break. Small acts of kindness meant a great deal to us during that tired phase of our trip!

The ride from Yellowstone to Glacier consisted of beautiful stretches of scenery punctuated by still more meaningful encounters. One day, we camped for free at a beautiful fishing pullout, and then cruised a tailwind with a 19-year-old who was taking some time to figure out life. Near Hamilton, we pace-lined with four college guys, and then stayed with a retired lawyer who taught us to play Bananagrams.

Twin Bridges, Mont, had a shelter specifically for touring cyclists. There, we met a couple who were bike touring to re-integrate into American society after spending five years doing humanitarian work in the Dominican Republic. They wanted to reassure themselves that Americans are good—and, like us, their expectations had been exceeded! As we pedaled to our journey’s end in Glacier National Park, where our family would converge for a week-long vacation, we realized that we’d learned a deeper meaning for the term, human-powered travel. The people that we met along the way lifted our spirits and helped us when we needed it most, inspiring us to pay it forward and become people of greater generosity and hospitality.

Editors Note: Names and details in this story have been changed to protect the identities and respect the privacy of the people mentioned. 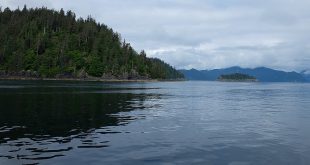