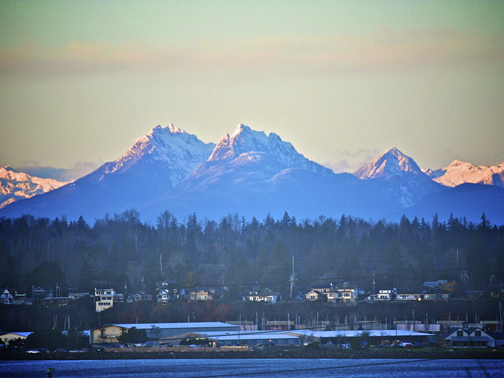 The twin peaks have occupied a spot in my imagination since I first took note of them many, many years ago. Slate blue and stately in the summer, bedecked in a gown of snow in the winter, the peaks, just north of the United States-Canadian border, stand slightly apart from their Garibaldi Range brethren—two “ears” that, on a clear day, you can see anywhere from Vancouver, BC, south to Bellingham, Washington, where I live. I often wondered what the view would be like from atop.

Golden Ears, as I came to find out, is the name of the grouping of three peaks that lies within Golden Ears Provincial Park outside of Maple Ridge, BC, and includes the northwestern namesake high-point (5,630 feet), as well as Edge Peak (5,512 feet) and Blanshard Peak (5,085 feet) to the east. What’s more, I learned that there was a trail to the top of the northwest summit. With just these bits of information my imagination was fueled—I wanted to go.

But life sometimes gets in the way—especially when you don’t plan otherwise—and a Golden Ears adventure sat on “The List” with all the other endeavors I had yet to accomplish. It was still there when, more than a year ago, I mentioned it to my friend Steve, an avid trail runner and founder/co-owner of Fairhaven Runners & Walkers. We were on a local group run to the top of Sehome Hill to watch the sun set on the longest day of the year, and the “Ears” stood out crisp on the horizon. Steve confessed that he, too, had looked to those mountains many times, and he suggested we try for the summit together. A pact was made, and though that summer passed without any further action, the deal was sealed when Steve emailed me in the dead of winter: “Golden Ears—the target: August 13, 2011.”

Unfortunately, the late arrival of summer 2011 precluded much access to the high country in August, so it looked as if heading up Golden Ears would remain on the bucket list for another year. But then a few unseasonably warm weeks and a window of opportunity in the guise of a “mostly sunny” day—flanked on either side by “showers”—presented itself in late September. Come what may, we decided to go for it.

Though the morning brings mostly blue sky to the lowlands, the mountains still hide under a blanket of last night’s clouds. Yet the rising sun seems determined to lift the gray sheets until they drift off harmlessly over the horizon; we are fortunate. At the trailhead we eye several other trekkers making last minute additions or subtractions to their large backpacks, then glance at our own smaller hydration packs: we’re on a trail run, and have opted for “fast and light”—the bulk of our supply being water. Already the humidity has risen and where the morning sun has hit the trail, yesterday’s rain is a distant memory.

The 12-kilometer trail starts out benignly enough and follows an old logging road before switching to singletrack. Steve and I set a pace that takes advantage of the more gentle grade and are soon ticking off the red diamond marks attached to trees that designate the trail as well as signal half-kilometer increments. We know from our research that the total elevation gain over the first 5k is only 750 feet. Even so, there are sections of the trail that rise and drop sharply and slow us to a walk. With the rising humidity and no wind, I’m soon covered in sweat. Steve, though, having spent a good amount of time in the South, seems immune to the heat. “Humidity? What humidity?”

After several stream crossings (one of which is particularly cool—a long cedar boardwalk that zigzags around trees and boulders strewn about in the stream bed), we reach Alder Flats, a campground that’s snuggled in next to one of the drainage basins. Here, in the confusion of willy-nilly trails to hither and yon, we briefly lose our way. But, thanks to the red diamond trail markers, we soon locate the overlooked turn and regain the trail. Now we start up—4,500 additional feet in about 4 miles—and any thoughts of running are soon dismissed.

The grade and general state of the trail boggles my mind. We gotta go up there!? I think as the next marker leads us up a drainage. We must have lost the trail! when we’re caught in a patch of dense side growth, only to see the next mark through the foliage a bit further ahead. Looks like a dead-end. But then Steve points up. Yep, I think looking higher and taking a giant-step up, there’s the mark.

I am dripping with sweat, but there is a little breeze as we gain Panorama Ridge and it feels so very good against my skin. The clouds that we had been climbing toward have moved off, and as we negotiate our way along the steep crest we finally catch our first look at the summit. It seems a long way off still. But it’s always like that. Things that appear far off and difficult to reach tend to be much closer and surprisingly easier than imagined.

As the ridge we’re following reaches a saddle, I spot the A-frame of the emergency shelter that sits further up. It takes us another forty minutes of monster-steps before we reach the shelter. Just past this point, we come to a snowfield. The crossing from here becomes unclear. Some of the red diamonds have turned white with age and exposure to UV rays, making them harder to spot. So like moths to the light Steve and I forego the hunt for the markers, step carefully onto the hard snow, and head toward the summit. That is to say, we go the wrong way.

We follow what looks to be a clearly established trail across the icy, sun-cupped snowfield, dirty boot tracks leading the way until the tracks diminish in the cleansing snow and all evidence of a trail is gone; the pitch increases dangerously as we near an upper ridge. Tired and reaching our angles of repose, we prudently stop and look around. There it is. Plain as day. Fifty feet up and a couple hundred feet to the left is the magic red marker hidden in the shadow of a group of trees. Though we both had researched the trails and read numerous cautions to “stay left of the knob,” we (and obviously many before us too) have failed to stay left of the correct knob that is further to the left than the knob which we are currently staying left of. 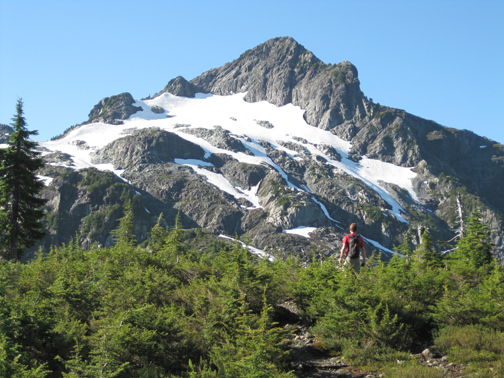 We carefully backtrack and traverse over to the correct trail, which now seems obvious (plus it’s snow-free and much safer). Another round of mega-steps and …

We’re there. Neither of us is expecting it, yet we are suddenly standing at the top. Off to the north is wave after wave of Coast Mountains ranges. Looking east and south are the summits of the other Ear (Edge Peak), and across the Fraser River valley are the foothills of the Cascade Range building to the crests of Mount Shuksan and Mount Baker. In between we can clearly see towns, roads, fields and forests. The skyscape of Vancouver to the west looks like a miniature toy-set plunked in front of the Salish Sea. We can even make out Bellingham—at least the expansive bay backdropped by our hometown Chuckanut Mountains.

For all our efforts, we spend far too short a time on the top. Our window is closing; as if on cue a high layer of clouds moves in from the south, covering the sun and heralding the coming of tomorrow’s forecasted rain. We descend, careful with our steps on the steepest parts. Dropping back under the canopy of the forest, the greenhouse-like humidity engulfs us again. We negotiate our way down (down, down), and a little past Alder Flats we pause at one of the stream crossings. I’m all for full emersion and a long soak, but in the interest of time I settle for rinsing my hands and face in the cool goodness before setting out—finally back at a running pace—again.

Roughly eight hours after kissing our sweeties goodbye at the trailhead, we arrive back to their welcoming cheers and a selection of celebratory IPAs and tasty treats. We’re elated. Perseverance, luck and a bit of prudence have brought us to the summit and back, and Steve and I now know what it is to look from the top of the twin peaks that have so long absorbed our imaginations. 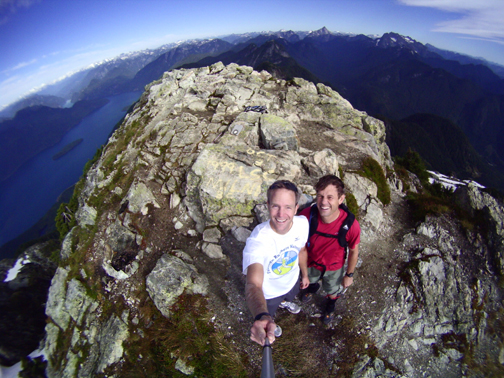