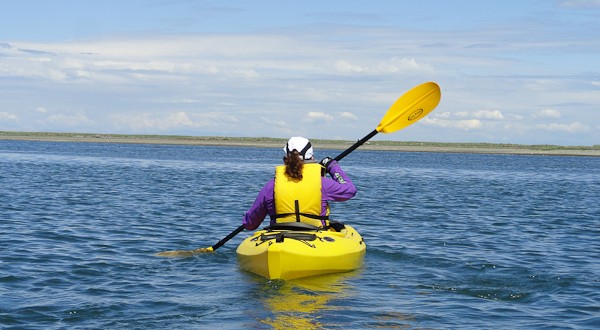 One good tern deserves another. To everything tern, tern, tern. Tern left, tern right. I wasn’t quite sure how many more horrible puns and plays on words my poor wife, Heather could take. We were paddling in the middle of Dungeness Harbor surrounded by Caspian terns. The shallow sandy islands in the harbor are excellent breeding grounds for these sea birds. In fact, the Dungeness National Wildlife Refuge that we were kayaking across contains some of the best bird habitat in the state. Over 250 species have been recorded here including five species of terns. And while the common tern is uncommon here, the Caspian tern is ubiquitous in the refuge.

I have visited the Dungeness National Wildlife Refuge, located along the Strait of Juan de Fuca on the north Olympic Peninsula, over a dozen times since moving to Washington in 1989. But it was always to hike the Dungeness Spit, one of the best beach walks in the state. One of the largest coastal spits in the world, this sandy finger of land extends for over five miles into the Strait of Juan de Fuca. At its tip sits the second-oldest lighthouse in Washington, the New Dungeness Lighthouse, completed in 1857 (four years before the U.S. Civil War).  Playful seals, score of birds and sweeping views of the Olympic Mountains make the hike a classic.

What then can be more exciting and rewarding than hiking at the Dungeness National Wildlife Refuge? Paddling there! Over half of the refuge’s 772 acres is water, including all of Dungeness Harbor and a slice of Dungeness Bay. Plus paddling in the harbor and bay allows you an opportunity to check out bayside flats and islands which are closed to hiking. The bay waters are protected and perfect for paddlers of all ages and abilities. The harbor can get rough, but if you don’t venture out too far away from Dungeness Spit, it usually isn’t too difficult to navigate.

If you have your own kayak you can launch from the small Clallam County Park on Cline Spit. This little north-jutting peninsula reaches out toward the long Graveyard Spit protruding south from Dungeness Spit to form the entrance to Dungeness Harbor. If you don’t have your own kayak, a couple of nearby lodging establishments on Marine Drive next to Cline Spit offer rentals at reasonable prices.

We launched in the protected waters of Dungeness Harbor and headed towards the nearby sandy islands and shoals. The surrounding estuary and spits comprise one of the most ecologically important areas within the Salish Sea. In addition to the diverse bird population, over 40 land mammals take up residence here at various times of the year. Marine mammals also ply the refuge’s waters and the tip of Dungeness Spit includes a harbor seal rookery. The surrounding waters also support salmon. In summer the harbor’s islands teem with nesting terns, while throughout the winter thousands of black brants (a type of goose that nests in Alaska) ply the harbor’s waters. The area is an important migratory stop for many other species too, and I have spotted loons, harlequin ducks, and endangered marbled murrelets here. It was this rich biological diversity that prompted President Woodrow Wilson to establish a National Wildlife Refuge here in January of 1915.

Human activity on these lands and waters goes back a lot farther than the last century. Coast Salish peoples lived, hunted and fished here for centuries. It was Captain George Vancouver who bestowed the name Dungeness on the bay and spit during his North American sailings in 1792. He actually named it New Dungeness after the “old” Dungeness, a promontory on the Strait of Dover in the English Channel. The name was subsequently shortened to Dungeness, although the venerable lighthouse retains the New Dungeness name.

On this beautiful sun-sparkling day we paddled into gentle winds to explore the harbor. The tide was coming in, inundating shoals and mudflats. Dungeness lies within the Olympic rain shadow, an area that receives on average less than 20 inches of rain per year. It is one of driest spots in Western Washington. Often – as was true this day – it is graced with sunshine as the nearby Olympic Mountains just to the south are shrouded in clouds. When the gray veil lifts, an incredible fortress of mountains, snowcapped for most of the year, provides a stunning backdrop to this maritime setting.

As we paddled closer to the largest of the harbor islands, the fetid smell of guano became overwhelming. And the last thing I wanted to wear was some of that guano as terns dived nearby and darted overhead. Largest of the tern species, Caspian Terns are widely distributed across North America, Europe, Asia, and Australasia. North American terns such as these depart for southern U.S. coastal waters, Caribbean Islands and northern South America waters in the autumn. In late spring they’ll return to animate this and other harbors with their cacophonous squawking as they plunge and dive for tasty fishes. As we paddled around the island, we had plenty of mammalian company, too. The rippling waters were constantly revealing the inquisitive faces of bobbing harbor seals. These refuge residents shared the island and the abundant seafood buffet with the terns.

After much time spent observing terns and seals, we decided to paddle out to the more open waters of Dungeness Bay. This involved paddling near the tip of Graveyard Spit which is off-limits to foot traffic and is therefore unknown to many hikers. Protruding south from Dungeness Spit for about two miles, Graveyard gives Dungeness a wishbone-like appearance when viewed from the air. While this spit is teeming with wildlife, its human history is quite macabre. The spit was named by early pioneers for 17 Tsimshian Indians from northern British Columbia that were supposedly buried here following a massacre by local S’Klallam Indians in 1868. The Tsimshians were camped on the spit waiting for favorable weather to paddle across the Strait of Juan de Fuca when they were raided by the S’Klallams.

Today, the weather was favorable for paddling Dungeness Bay but nevertheless we stayed within close proximity of Graveyard Spit as we paddled north towards the lighthouse. We wanted to remain closer to land primarily to observe birds and mammals feeding and moving about on the grassy spit – and to avoid getting caught off guard by strong currents, which can be challenging farther out in the strait where strong winds often whip across the open waters, creating formidable swells.

We paddled against a fair breeze, enjoying views of the historic lighthouse that graces the tip of the spit. The one and half story Cape Cod-style structure consists of a conical tower that rises 100 feet above sea level. The lighthouse’s foundation was built on two-foot-thick Chuckanut Sandstone blocks that were shipped from Bellingham. The structure is as regal and important as a navigational aid (automated since 1976) today as it was when first staffed in 1857.

On this clear afternoon we didn’t need the aid of the lighthouse to paddle back to shore, and the wind at our backs made the paddling easier and quicker. The tide was coming in too, assisting our return to the bay. We came away from the Dungeness National Wildlife Refuge with a whole new appreciation for this magical place.

And one thing is certain – it is a heck of lot easier and quicker paddling out to the lighthouse than hiking the 11 miles roundtrip! 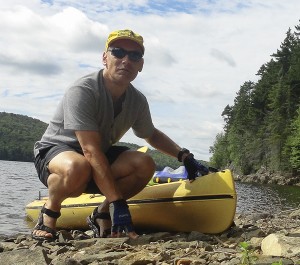 Craig Romano has written and co-written 13 books, mostly on hiking. Occasionally he shuns the trail to do some canoeing and kayaking. He has paddled beautiful waterways in the Northwest, Northeast and across Canada. When not adventuring, he’s home in Skagit County with his wife and two cats.