Lessons from the Back of the Pack on Every Continent 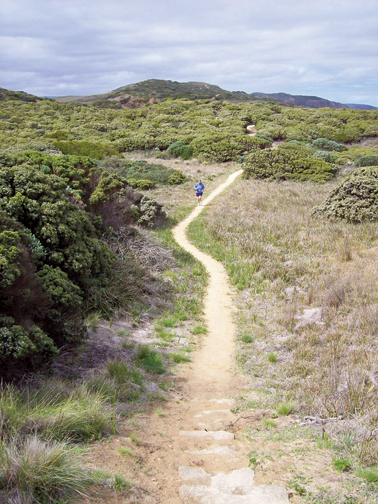 One morning back in February of 2002, I suited up in some old cotton sweats, parked my car beside the Green Lake trail, watched for a few minutes as Seattle’s walkers and roller bladers zoomed by me, then inhaled deeply and started jogging. I wasn’t a total stranger to running, but I was in the middle of a divorce and had been laying low for a number of months, barely able to get up and go to work, let alone get my heart-rate into its target zone. I ran three miles that day, and it took me thirty-six minutes, not counting the break I took to duck into the restroom.

Just a week earlier, I had reconnected with an old friend who’d said running had helped him manage the intense feelings he’d felt during his own divorce. I was skeptical that it would work for me, but I didn’t have much to lose, either. Why not go for a run? Why not find out if breathing hard could exorcize my demons?

Running worked for me. Over the course of the next several months, I fully embraced a routine of running that same little three-mile route several times a week, never finishing in less than thirty-six minutes. I healed slowly from the pain of my divorce, and I attributed a lot of that to my slow jogging ritual. I felt stronger and clearer. Then Bill, the friend who had suggested I take that first run-as-meditation, asked me if I wanted to travel with him to Prague the following spring to run a marathon. I was intrigued by his proposal, but doubtful I could stretch myself from a few three-mile runs a week to a full marathon. I’d known people who’d done marathons, and the training and racing alike looked hard. I grappled seriously with the decision of whether or not to make the commitment to training, or to thank Bill for the invitation and offer just to drive him to the airport. But in the wake of my new post-divorce life, scared as I was that I might fail and as crazy as I knew my friends would think I was, I decided to take the risk and train for the race.

Prague was beautiful that May. And we had a long time to enjoy the course— through cobblestoned city streets, across the iconic Charles Bridge and along the Vtalva River—since it took us nearly six hours to finish! It turned out that I was definitely capable of getting my body ready for the marathon distance, but I couldn’t get it to move very fast. Bill was a trouper; he stuck with me every step of the way and proved to be an excellent cheerleader.

Many more steps and eight years later, Bill and I are married, living in Bellingham, and recently finished running a marathon on each continent of the world. Every race except one (in Bellingham’s Japanese sister city, Tateyama) took me more than five hours to complete. While my husband competed respectably in his age group, I dawdled through each and every race and took in the beauty of Australian vineyards, South African coastlines, Brazilian city skylines and the shy curious glances of Japanese onlookers.

Through these years, I’ve become familiar enough with marathon culture to know that completion times are serious business for a lot of runners. I admire the folks at the front or in the middle of the pack. They battle against themselves and others with a verve that inspires cheers and hoots and gives them a sense of deep satisfaction and success. For me, however, having brought up the rear in marathon packs on every major land mass, I’ve had the time to reflect on my own version of success. My travels and races in the past few years have taught me some lessons that I now carry with me into every day of my life.

Here are a few of them:

Every negative thought will pass, given enough time.

It was one thing to do that first marathon in Prague with Bill by my side for company and encouragement, but I’ve run all my subsequent races on my own. I have often stood at a starting line with the other runners, knowing that most of my day will be spent on the course—alone. This solitude has forced me to make peace with my noisy inner voices. Like everyone else, I have a few inner critics that demand air time, and they seem to be particularly vocal when I’m racing or training. It’s cold out here. This is taking too long. This is boring, they say.

I’ve learned to ask these voices to quiet down so I can hear myself breathe. And, just as was the case on that three-mile run around Green Lake so many years ago, breathing continues to be healing.

It has taken me a long time to learn this one. I wasn’t an athletic kid. In fact, it wasn’t until I was a student in community college, forced to take a PE class to complete my health credit requirement, that I discovered it felt good to move my body. Given my known lack of athleticism, the decision to train for and run marathons was an audacious one. But determination is just as important as natural athletic ability. I discovered early on in my running that I was not likely to be competitive no matter how hard I trained, which allowed me to make a commitment to find a pace that made my body feel happy. And I have. My slow, plodding, tortoise-like pace brings me joy.

In my mind, this is a metaphor for life. If you want to be happy, you have to decide how much you want to push yourself and then live at your authentic pace.

Every race has a gift to offer.

The gift in any given experience is not always evident at the outset. For example, in South Africa, I was sick with fever and stomach flu. In Australia, I almost tripped over the carcass of a dead wallaby. And in Panama City, the sky dumped a flash flood on me (on everyone, really—I didn’t take it personally) after I’d been running for about four hours. Bill has had his own misadventures, too. In one race, he got lost and ran an extra three miles, forfeiting his position at the front of that particular 31-person marathon pack. In Japan, we couldn’t read any of the course signs meant to give runners pertinent information. And in Antarctica, well, let’s just say that running in the dark with a headlamp in the snow is just like driving in whiteout conditions on the freeway. Very disorienting!

Every one of these experiences, however, gave us a great story, something to bond over and something that reflected back to us our ingenuity and strength. I’ve come to believe that the gifts of good stories, of being a part of something bigger than ourselves, and of finding our inner (and outer) strength, have a lot to do with why humans take on tasks like climbing mountains, skydiving, or running 26.2 miles in icy deserts. 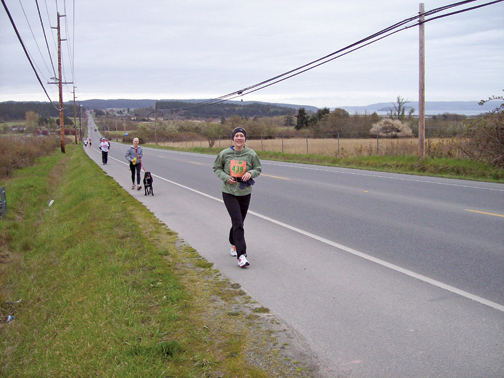 Marathoners are great people to hang out with.

By the time Bill and I got on the marathon bus in South Africa, we’d already spent a week noticing that, although Apartheid has been illegal for many years, South Africa is still a very segregated society. On the bus, however, and later on the course, runners of all races were side-by-side and mutually supportive of one another. I’ve found that all over the world (mostly in less dramatic ways than in South Africa) marathoners value and respect one another’s differences.
I was once cheered over the finish line by a world-class Kenyan runner. In my experience, the folks at the front of the pack understand that those of us at the back have been on our feet for a much longer time, and they respect that. Meanwhile, those of us bringing up the tail relish that awesome moment on an out-and-back course when we get to see the leader coming through—strong and tight and fast!

Back in elementary school, I hated PE. I hated the obvious disparity between myself and others that was bound to show up when I took to the soccer field or the badminton court. In the running community, difference is welcome.
These last years have been a whirlwind as we’ve jumped from continent to continent, and now that we’re taking a break from foreign travel, I’ll admit to feeling the letdown of coming off of an adrenalin high. But I also appreciate the time to reflect that staying put provides.

Nowadays, I park my car at one of the dozens of trailheads we’re lucky to have in Bellingham, stand for a few minutes as I watch bicyclists and runners buzz by, take a breath and then start a slow jog—happy to be home and happy for what my many, many 12-minute miles have taught me.