In the wood there are paths, mostly overgrown, that come to an abrupt stop where the wood is untrodden.

Having been away from the Picket Range for more than 40 years, I was eager to try my hand at the much vaunted bushwhacks for which it is famous. The managers of the place have an uncanny skill at building trails where they are not needed, through mainly wide-open understories between 400-year-old cedars, while leaving the slide alder and devil’s club swaths leading to the peaks undisturbed by such niceties. This allows for a full body workout that no one truly interested in fitness deserves to miss.

On my previous trip to the southern range, the route up from Azure Lake to McMillian Spire had everything a “buffaneer” could dream for, and now here I was, older but not much wiser, canvassing my friends about a trip up Big Beaver Creek to Luna Peak. My climbing buddy Rick Lindberg has a warm spot for Ross Lake where he fished with his dad and grandpa in the early 1960s. His dad helped string Ross Dam power lines as a teenager, and it had become a family ritual to stay at its floating cabins as a base camp for trout fishing in the lake. Since Rick is a Seattle-based artist and I have always enjoyed doing illustrations, we packed what we thought would be enough food to allow an extra day or two for sketching once we reached our destination. “Don’t forget to include shin guards,” I mentioned as though in passing.

The trip was excellent from the start, beginning with a rapid descent to the dam and a pre-arranged boat trip to the mouth of Big Beaver. Rick recalled piloting the boat as a young boy, easing off the throttle as he approached the narrow opening in the log boom protecting the cabins from driftwood. “Full speed! Go for it!” his dad encouraged, and a young man was born as they rocketed through.

The main part of the lake was hazy, with the surrounding peaks barely visible as a result of recent massive forest fires in British Columbia together with one called “Arctic Jim” just a few miles north of where we were heading. “Good light effects for sketching,” we ventured, being the optimists we are. The rest of the day was spent hiking along the creek in the direction of 39 Mile Camp, the only place with sites still available. The forest along this route is absolutely spectacular. I stopped short at one point, feeling I had wandered onto the film set of Seven Samurai. Were the peasants about to lure us into a trap, allowing one barbarian at a time to enter the copse leading to their village?

A little further on, we found a hiker lying in the middle of the trail. “Go ahead, step on me, I dropped here and can’t move.” He was from Okanagan County and we talked about a hike that we had once done there to Horseshoe Basin. Slowly we realized he had hiked from Okanagan, and eventually it was divulged he started 45 days ago. “From where?” “Glacier National Park.” He and his partner were traveling through the Pickets on their way to the Pacific from Montana! We met them again at the river after we set up camp at 39 Mile. Hats off to those two.

On Day Two we hiked past Luna Camp, keeping an eye out for a cairn marking the spot to leave the trail, descend to the river and ford over to Access Creek basin leading up to Luna Peak. We found the cairn and started our bushwhack into the dense understory.

I will not follow where the path may lead, but I will go where there is no path, and I will leave a trail.

As we approached Big Beaver, the water seemed to make a lot of racket to the left, so we headed upstream until we found a shallower, quieter section and managed to cross with only one brief dunk in the stream due to lost footing.

The goal of our trip lay before us, a cheery expanse of slide alder bounded by firs against the cliffs behind. We made our packs as small as possible to avoid “incidents”, and entered the fray on a rightward sloping trajectory.

Say not that this or that thing came to thwart you; it only came to test you.

Imagine yourself in a kludgy nightmare, consigned to mount a galloping cartoon cathedral organ with all its pedals swaying and tossing you, and from time to time smacking you whenever you might be distracted by—say, a little yellow-green devil who pops up and beats you with his serrated club. Dust and pollen are stirred up, making you awful thirsty in the smoky haze of Cascade wildfire season. After you have scaled one of these curious musical instruments, another awaits you. And another. Our long-established habits were useless as we confronted the unfamiliarity with which the world must have first appeared to humankind. In the slide alder world, things moved us in a quite literal sense, as though nature was shaking us to encounter it in new ways, and in so doing, grasp that part of things that doesn’t appear, that doesn’t show itself, the mystery of the world eluding our mind’s strivings.

“Up” and “down” are trivial generalizations. Arcs, vectors, inertia, and momentum in three dimensions, now caused us to experience movement as something strange and made us wonder anew and experience visions of an enmeshed green and brown-limbed web. You notice blood streaking along your forearms (nothing serious, mere flesh wounds); your glasses and occasionally your entire body are playfully thrown to the ground. Do I have human legs and arms or have I turned into a swinging ape? Gravity never seemed so exaggerated before! I tumbled backwards, landing upside down, my wrist pinned by a strap behind my back. Rick, overcome by the mind-boggling complexities multiplying before him, let himself go, dropping into a thicket. There was no complaining: we had chosen this with knowledge aforethought. It’s all part of seeing how you measure up against the Pickets. 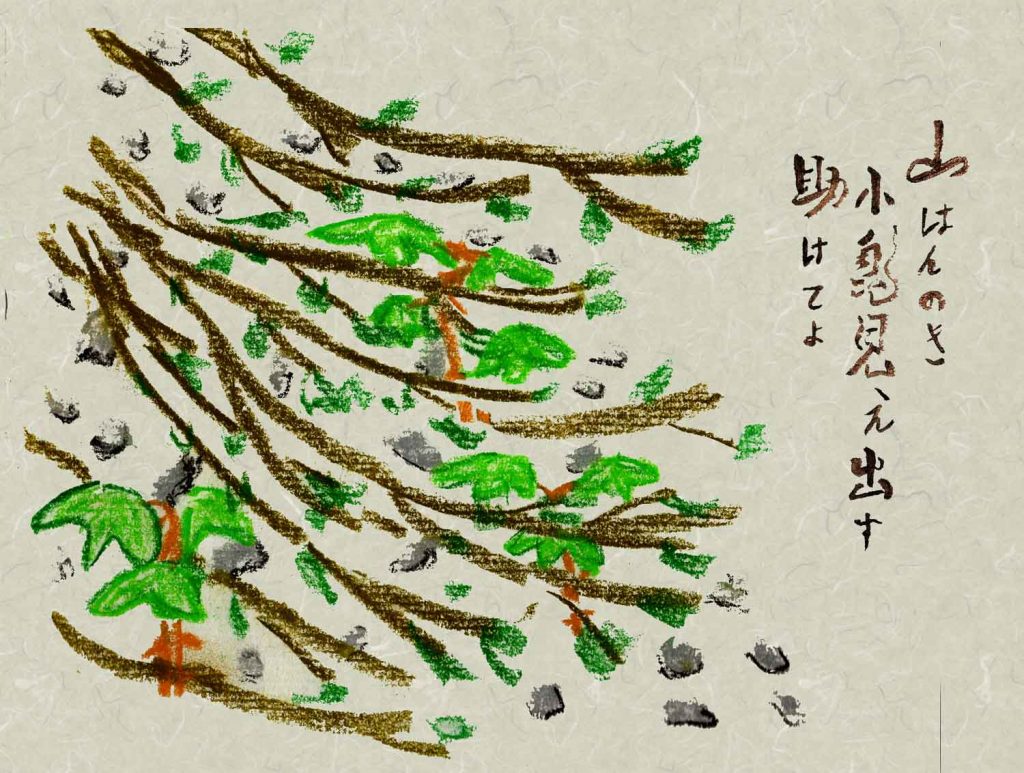 Artwork and haiku by Tim Ahern

As the sun and the water in our bottles waned, we became more cognizant of our surroundings. The ultimate object of the day was not to claw one’s way to the brief respite of the next conifer perched on an atoll of soil in the overgrown boulder slope. Where the hell was Access Creek?

We had proven ourselves men of steel with a full muscular-cardio routine in this floral ambuscade, but also we were supposed to climb a peak tomorrow.  Slowly the hillside eased past us, and we began to enter a defile.  Rick gave a whoop, “Snow!” Snow meant drinking water! We would live to see another day! But it got better. There was a ten foot sliding, tumbling waterfall perfect for filling water bottles. There was a small rock outcrop for a two-man tent. Hummingbirds, picas and chipmunks were flitting and scooting around. And the view – tall mountains above a symmetrically arced pass… wait a minute…

We were gazing at Beaver Pass, which is beyond Access Creek by some miles. (Brief pause to plug the virtues of electronic navigational devices. Very good, carry on!) Back at the river, we should have turned left up the slope rather than right. Had we wandered off onto one of those holzwege celebrated by the German philosopher Martin Heidegger? He acknowledged that while holzwege (timber tracks) generally are considered dead ends leading nowhere, they can also turn out to be paths of discovery, bringing the seeker face to face with what is real, something his mentor Edmund Husserl championed.  Our foray had led us to the ideal untrammeled spot for sketching the entire next day.

To the things themselves! (Zu den Sachen selbst!)

For his subject, Rick chose a multi-dimensional, involuted valley.  The effect hinged on evoking a sense of depth, at which he surpassed. I opted for the obvious: col and mountains beyond, with the slug of last year’s snow that Rick had whooped about in the foreground.

Just as we finished, a mass of smoke came billowing down between the ridges, Mox Peak and Mt. Spickard disappearing right in front of us as a helicopter came several times to hover across the valley at Beaver Pass. Did the Arctic Jim fire wake up? Was it time to eat dessert first and make a run for it? The mountains maintained their stony silence concerning the matter. We decided to stick to our plan and leave in the morning.

We were awakened by a calyptra-shrouded, carmine-rose sun, and descended a king’s highway of boulders free of undergrowth (free of undergrowth!) into a dry bed of wild primordial plants within sound of the river. By pure chance we walked straight to a natural bridge of two giant fallen cedars, one for footing and one at shoulder height for balance. (Very thoughtful. Mental note to thank the powers involved.)  We retrieved the trail for the hike to Luna Camp. On the way we met a fire crew carrying shovels and axes on their way up to their staging area at the pass. Their job was to keep the trails fire-free and, failing that, to alert hikers to evacuate.

At Luna Camp we sketched the river. As if channeling Heidegger in his Off the Beaten Track, with only a few pastels Rick managed a very kinetic portrait that evoked the strife in artwork as it uncovers the aspects of things withheld from us, and so allows the eventual unforced coming-forth of their inner nature.

The next morning, we made our way back to Ross Lake. While waiting for the boat, five climbers who had just completed their Luna Peak ascent joined us. “Terrible,” they said, “No view. Couldn’t see Mount Fury for the smoke. Nothing. We tried last year, but got hung up in Access Creek.” Rick and I looked at each other. Our original plans had been similar to them, but all our attempts to impose an overarching plan on the Pickets had completely dissipated. We had occupied a spot between Arctic Jim and summit haze where our original goal, sketching, was possible.  Maybe the spirit of Heidegger had been walking alongside us, head inclined, engrossed in the wonders of the journey on untrodden ground. 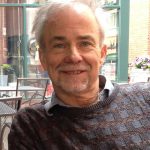