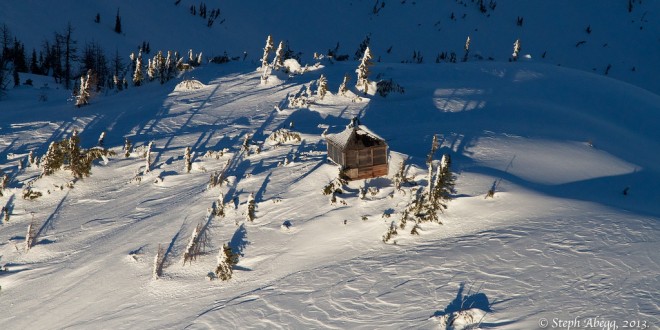 A group of intrepid volunteers spent this past summer restoring the classic Mebee Pass Lookout, located in the Okanogan National Forest west of Mazama, WA.

The 80-year old lookout structure (abandoned by the Forest Service 60 years ago) had been saved from total collapse in 2002 by Forest Fire Lookout Association (FFLA) members Barry George, Doug McKeever and Jerry Huddle, who hiked the overgrown 18- mile round-trip trail in to the site to stabilize the failing structure. In February, 2013, photographers John Scurlock and Steph Abegg captured stunning aerial photos of the lookout, and Scurlock began reaching out to interested volunteers with the intent to restore the historic structure (Meebe Pass Lookout is the last “L-5” lookout standing in the North Cascades).

His efforts led to the formation of a “Friends of the Mebee Pass Lookout” group this past spring.  The group spent the summer busily working on both the lookout and  the trail, and thanks to their tireless efforts, the Meebe Pass Lookout has a new lease on life. This video, compiled by team member RJ Van Liere, tells the story of the restoration effort and showcases what committed volunteers can accomplish when ‘officialdom’ is constrained by lack of funds. We all owe a debt of gratitude to the Friends of the Mebee Pass Lookout.

For more information, contact Friends of the Mebee Pass Lookout at:  mebeepasslookout@gmail.com