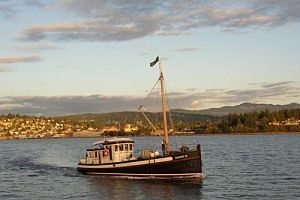 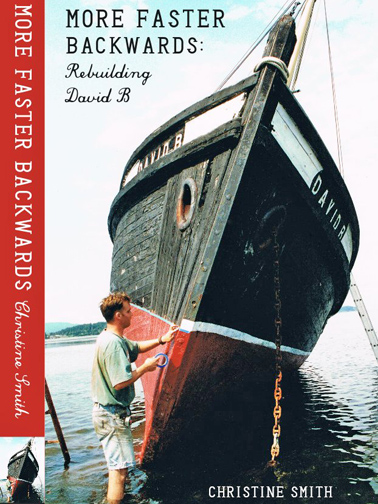 EXCERPTS FROM THE MEMOIR BY CHRISTINE SMITH ||

The first time we were shown the David B, I thought it was a mistake. I stood on her deck listening to Jeffrey talk to the boat’s owner as if he were interested in buying the rotten old thing. Honestly, I just thought Jeffrey was being nice.

“Rough” was a polite way of describing the David B’s condition. Her hull was black and weathered, with planks that were pitted, and her paint was peeling. The billboard, which protects the bow from the anchor, was rotting, with some of its vertical staves broken or missing, and the white pilothouse sat old and faded on the aft end of the deck like a forgotten old woman in her rocking chair. 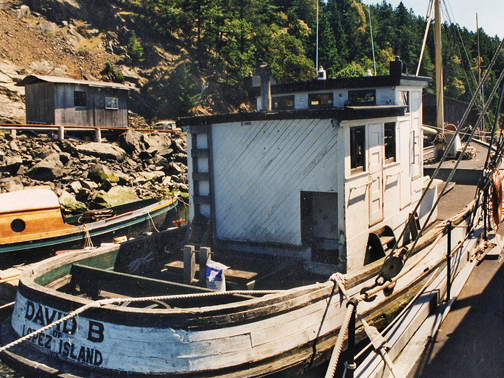 .  .  .
As I contemplated this old boat, I was reminded of my great-grandmother, old and wrinkled, sitting proud and silent waiting for someone to ask her about her story. The pilothouse, like the rest of the boat, was in need of care. The David B’s windows had the faraway expression of an old woman who’d seen much hardship and was tired of living. Maybe the soul of the David B entertained the idea of slowly sinking into the waters here in Shoal Bay and resting its tired keel on the rocks just below.
.  .  .
I walked the opposite direction from Jeffrey and Jeremy [the boat’s owner] over to the doorless scuttle and leaned my head into the dark interior of the boat. It smelled old, like a mildewy canvas tent. As my eyes adjusted to the dark, I could see that the area called the fo’c’sle had mounds of junk piled up everywhere. There were heavy lines, cast-iron things, mattresses, fifty-five-gallon drums, oversized handmade wrenches, a potbelly woodstove, and a host of other items hiding in the shadows. There were some bunks that were crammed full with the majority of this collection of crap. I climbed down the ladder to get a better look.
.  .  .
I continued my tour of the interior of the boat. Just aft of the fish pens was another bulkhead. This one was newer and made of plywood. It appeared to have been constructed by Jeremy. At the bottom center of the bulkhead he had attached a wok, like you would use to make a stir-fry. It was odd and a bit puzzling, but as I leaned in to investigate, I saw that the wok covered up some part of the engine that was sticking out through the bulkhead.

Jeffrey and Jeremy were talking in the engine room just behind the bulkhead with the wok. I went through the doorway and stopped to look at the engine. It was big and green, the size of a Volkswagen. In the low light, it seemed more sculpture than late-1920s state-of-the-art technology. It stood about six feet tall. On the outside was a confusing array of pipes, rods, and tiny copper lines. I slid up next to Jeffrey, who was asking rapid-fire questions. The conversation was over my head, and their voices quickly faded away, like the voices of adults in a Peanuts cartoon. While I took pictures, Jeffrey eventually exhausted his questions about the engine and left with Jeremy to continue his tour into the fish hold.

For a moment I was alone in the near dark with just the single light bulb casting shadows around the edges of the engine room. I bent down to read the company name cast into the engine’s inspection plates: Washington Iron Works. The name sounded strong and conjured up images of molten metal and exploding sparks. I stood back up and leaned against the tool bench. This boat had Jeffrey written all over it. He loved old things and old technology. I smiled to myself, and in that moment I knew in my heart that this boat was ours. It wasn’t so much a voice in my head as it was a grip around my heart. I sometimes like to pretend that it was at this moment that the boat picked us to save it from its long years of neglect and decline. I left the engine room ready to see Jeremy’s other boat, knowing already that we had found our future here with the David B.

It took almost a month for Tom and Jeffrey to remove the main deck, and during that time Jeffrey obsessed about the best way to redo it. As often happened, he formulated a plan while we were running.

“Since our brand-new, traditionally laid foredeck leaks like a frick’n sieve, let’s not do that again.” He took a breath. Then he asked, as we ran down our alley in the early morning darkness, “I was thinking about using plywood. What do you think?”

We always start our runs a little fast; Jeffrey’s a jackrabbit and I’m a tortoise.

“The advantage is that we can make it completely watertight. The last thing we want to explain to passengers is that the deck leaks are part of traditional seafaring. Having water dripping on your forehead in the middle of the night won’t be acceptable as an authentic experience.” Jeffrey half laughed as we turned the corner.

“No, there’s marine plywood that has special glue,” Jeffrey said.

I grunted a bit to let Jeffrey know I had heard him and that the pace he set was too fast. We ran in silence for a while.

A tight deck would make our future passengers happy, I thought. But does Jeffrey really know what he’s doing? I’ll wait for the next downhill to ask.

“It’s perfectly normal to build a deck out of plywood. I can show you some down in the harbor.” Jeffrey practically sang as we headed up a short hill. It was still dark, and the crushed limestone trail glowed just enough for us to see our path.

Jeffrey had tricked me into the sport of running when he bought me a pair of running shoes and told me they made me look sexy. I’d only been running for a couple of years, and hills of any length were still a struggle. “Nah. . . if you think you. . . know what you’re. . . doing, then. . . I. . . don’t need to go on. . . a special field trip.” We crested the hill and the trail flattened out. I could breathe easier. “How will we keep the seams from leaking?”

“We can fiberglass them—and by the way, good job on that hill back there,” he said.

“Thanks,” I said, before asking, “How would we finish the deck? Do we paint the plywood or put that rubber coating like on the Chief Kwina or Phoenix?”

“I don’t know yet. I’d like the deck to look traditional, but I’m not yet sure how to do that. Maybe we could make some planking that’s not as thick as the planking on the foredeck and glue or screw it down to the plywood. I think it would look a lot better,” he said. 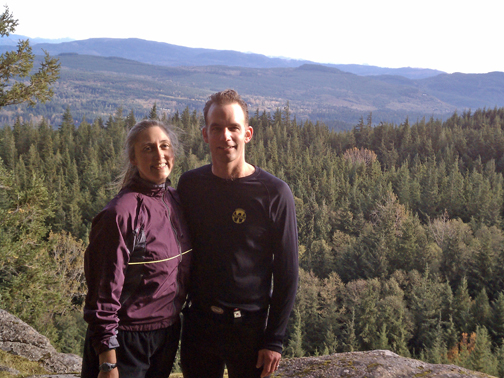 We finished our morning run. It was just beginning to get light outside. I was happy that Jeffrey had figured out what to do about the deck. In the back of my mind, I worried that the leaking foredeck was my fault. I hadn’t totally understood that the purpose of giving one side of each plank a slight angle was to make a half v-shaped seam for the caulking. I feared that I had made the angled edges too wide on most of the planks I’d done, and that had made the seams hard to caulk. Then, as the green wood shrank, the seams widened more, causing an even leakier deck. If it was my fault, Jeffrey has never said.

from Chapter 10 –  IT ALL SEEMED SO NATURAL

As we neared the bridge in Juneau, my heart raced. In less than ten minutes’ time, we would be secure in Juneau.

“Aaron, do you want to slow us down a bit?’ Jeffrey said. “Christine, Sean, looks like a starboard-side tie. Whenever you’re ready to get the lines out, go ahead. Also, Christine, make sure you get a picture of us going under the bridge.”

“Right, I’m on it,” I said grabbing my camera. Sean left the pilothouse and walked up the deck. Steven followed to help.

I went out on deck to look up at the mast. The sky was bright blue, and the green pennant waved gently. I stood just in front of the pilothouse, watching the bridge get closer. I took a deep breath and momentarily held it. The bridge was like a gate, and once we passed under it, we would be at the destination we had worked so hard for over the last eight years. I thought back to the first day Jeffrey and I had gone to Lopez to see the David B. I thought about all the people who claimed we’d never finish restoring the boat. I felt proud as I watched the bridge near. We had started out with nothing but a rotten old wooden boat and a whole lot of ambition. We did it, I can’t believe it, we really did it, I thought to myself, trying not to get all emotional and break out in tears.

I looked back at Jeffrey. He was leaning out the open pilothouse window with his left arm resting on the sill and his right hand on the wheel inside. He was smiling. The images of him backing the boat out of our slip on the first day of the journey came back to me. Over the last couple of weeks, he’d learned so many secrets that the David B had been waiting all these years to tell him. I thought about how many times I’d questioned our ability, and I thought of the boat itself: You were right to pick us. Thank you for believing in us.

Jeffrey caught me watching him. “We’re almost there.”

I smiled back to him, wanting to say something, but my eyes just welled up instead.

I lifted up my camera and took a couple of pictures as we went under the bridge and turned into the harbor.

Jeffrey maneuvered the David B into our assigned slip. Sean stepped off as we came alongside the dock and took a line from Aaron. “Spring’s on!” Sean shouted, just like always.

There were people on the dock who had paused to watch us tie up. I handed Sean the bowline, and Aaron walked to the back of the boat to get the stern line. Jeffrey stood in the doorway of the pilothouse watching over us as we tied the lines. When we finished and he was satisfied, he looked over to Aaron. “Finished with engines,” he said, and as soon as he spoke, a flannel-clad old man came over to ask questions about the boat, just as they did at every place we stopped.

Jeffrey beamed as he talked. I could see in his body language that he was proud of his boat, his crew, and his skill in running the boat. I sat down next to him on the pilothouse doorsill. I could hardly believe that we had just taken the seventy-seven-year-old David B on an eight-hundred-mile journey though the Inside Passage. 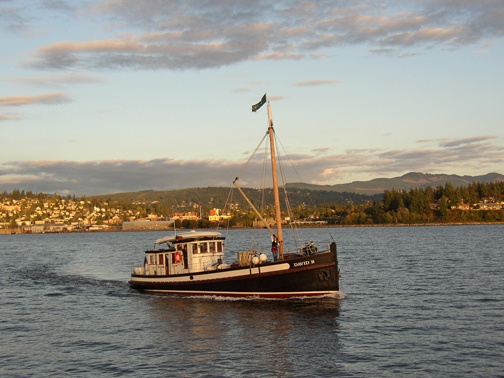 See more photos and information on author Christine Smith, Captain Jeffrey Smith, and the David B at www.morefasterbackwards.com or www.northwestnavigation.com