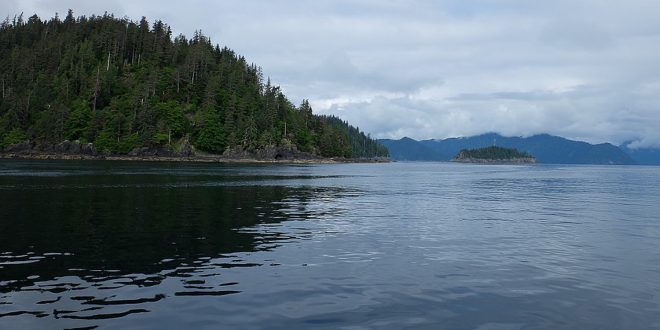 Situated in the southern part of Haida Gwaii (formerly the Queen Charlotte Islands), Anthony Island dangles on the very edge of the continent, seemingly poised to be swallowed by the Pacific. Shortly after I set foot on this 395-acre tract of rock and Sitka spruce, I found myself being stared at by a bestiary of faces—eagles, black bears, killer whales, beavers, ravens, and mountain goats. These were not the faces of the local wildlife, but faces carved onto totem poles by the Kunghuit, a group of Haida who once lived here.

I was accompanied by a middle-aged Haida man named Wanegan. He was the local Watchman, so named because his job was to keep the island’s ancestral artifacts safe from plundering outsiders. Wanegan had been coming to this now uninhabited chunk of land for more than twenty years, usually by himself, yet he told me he never felt like he was alone here. The ghosts of the past always seemed to hover nearby, gathering shellfish, dancing, shouting, laughing, crying, stripping bark, or carving a totem pole. He assured me that none of these myriad ghosts bothered him in the least.

As we moved from pole to pole, Wanagan said that the phrase “totem pole” is actually a misnomer for these poles, for they were mortuary poles. They were erected to honor a deceased family member or perhaps a chief whose remains—after a suitable period of mummification —would be placed in a cedar box, then that box would be put in a rectangular chamber at the top of the pole. He pointed to a cluster of bones thirty or so feet above my head. How nice to experience a portion of one’s eternal slumber perpetually aloft like this, I thought.

The animals carved onto the poles were not monsters, Wanagan said. Nor were they deity figures worshipped by the Haida, contrary to the opinion of outsiders who visited Haida Gwaii in the 19th century. Instead, they were crests of social identity and rank similar to a European coat-of-arms. The animal on a particular crest told the story of how the deceased person’s ancestors had initially made contact with that particular animal a long, long time ago.

I asked Wanagan if he could tell me one of these stories, but he shook his head. The stories had disappeared with the Kunghit themselves, he said.

We approached the stumps of several poles whose carved sections had been cut off and shipped to museums in Canada and the U.S. some years ago. To Wanegan, this was not unlike wrenching a person from his home and clamping that person in jail for no apparent reason. “Those poles were born here,” he declared, “and they should be allowed to die here.”

The poles that remained were in fact dying here, buffeted by the wind, scoured by salt spray, consumed by fungi, and eaten by wood-boring insects. Most Haida think this is as it should be, since these towers of wood weren’t created to last forever. Indeed, when one of them toppled over in the old days, it was simply pushed away so it could return happily to the earth from which it came. 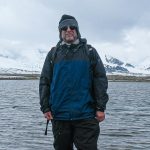 Lawrence Millman is the author of 18 books, including such titles as Last Places, Our Like Will Not Be There Again, Lost in the Arctic, A Kayak Full of Ghosts, Fungipedia, and—most recently—Goodbye, Ice. He has a fungal species named after him, Inonotus millmanii, and will soon have a velvet worm named after him.  He keeps a post office box in Cambridge, MA.