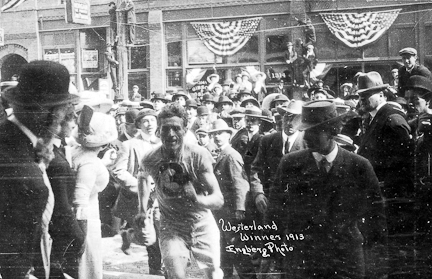 The Mountain Runners, a feature documentary released this year that tells the amazing story of the Mount Baker Marathon has been nominated for “Grand Prix Graz 2012” award and the “Alpine Camera in Gold” award at the 24th International Mountain & Adventure film festival in Graz, Austria. This festival, which runs from Nov. 9-12, is one of Europe’s biggest mountain film festivals.

“Brian and I were just floored to receive acceptance by one of the most prestigest mountain film festivals in Europe,” Co-director Todd Warger says. “We packing our bags and are planning our trip to Vienna in November, where we head south to the mountain community of Graz. Brian and I can’t wait to hear the reactions in the theater to loggers running in the Cascades here in the Pacific Northwest so many years ago.”

An undertaking of epic proportions, the Marathon was held for three years (1911-13) and was the inspiration for the contemporary Ski to Sea Race, held each Memorial Day weekend in the Bellingham Area. The modern version, a relay race from the ski area on Mount Baker to Bellingham Bay, features seven legs: cross country skiing, downhill skiing or snowboarding, running, road biking, canoeing, mountain biking and sea kayaking.

The original Marathon was something else altogether – a race from Bellingham to the summit of 10,778 foot Mount Baker and back again, 116 miles of mud, sweat and glory. Not a relay, each competitor covered the entire distance, which involved two distinct components. First, the racers had to get to the start of the trail up the mountain via either a steam train or in stripped-down, souped-up Model T’s, careening over the dirt and mud roads of the day at speeds reaching 65 miles per hour.

The racers on the train then began the climb up the Glacier trail from the hamlet of Glacier, a distance of 28 miles round-trip. Racers who opted for automobile transport started from the community of Deming and ascended the Deming Route, a 32 mile round-trip. Either way, the elevation gain was a staggering 9700 feet and required running up trails slick with mud and awash with the glacial melt of streams swollen by rain.

Once they reached tree line, they ran up snowfields and across crevasse-riddled glaciers in canvas shoes or hob-nailed logging boots to the top of the mountain, where judges were stationed to verify their success at summiting. By the time the runners had returned to the trailheads for either the automobile or train ride back to Bellingham, many were delirious with exhaustion. Some had to be tied to the seats of the Model T’s to prevent them from falling out on the ride back through the foothills at breakneck speeds.

The first year of the marathon, Harvey Haggard, a local mule packer, was leading the field after summiting Baker and was the first to reach the waiting train for the ride back to Bellingham. After boarding, the utterly spent Haggard opted to avail himself of a massage as the train sped back to Bellingham. The train turned a corner and collided at high speed with a massive bull that had wandered onto the tracks, derailing it and pitching Harvey naked into the brush. A horse and buggy were quickly commandeered and the dazed racer headed for Maple Falls where he was lifted out of the buggy and put on another horse, which galloped away with Harvey hanging on for dear life. At Kendall, a car was waiting for him but when the engine was started, it spooked the horse, which threw poor Harvey into the dirt. He was picked up, dusted off, and put into the car, which tore off towards Bellingham. He fainted twice along the way.

By the time Haggard reached Bellingham, another racer, Joe Galbraith had already arrived via “Betsy”, a Model T,  and had been declared the winner with an official time of 12 hours and 28 minutes, beating the nearly-delirious Haggard by a mere 32 minutes. Galbraith was awarded the first place prize of $100 in gold coins but Haggard’s tenacity had won over the crowd, which passed a hat and raised $50 for the woozy mule packer.  The townspeople of Glacier crowned him “King of Glacier” and organized a gala banquet in his honor.  The train-derailing bull was butchered and barbecued for the occasion.

The next year, the mayhem continued. Encouraged by the popular success of the first Marathon, the Mount Baker Club, organizers of the event, increased the purse to a then-princely sum of $500.

By race day, tens of thousands filled the streets of Bellingham, including the Governor and a host of distinguished guests.  Navy ships were anchored in Bellingham Bay. The circus came to town. The Mount Baker Marathon, promoters agreed, was putting Bellingham and Mount Baker on the map. It was beginning to look like there was some serious money to be made.

But meanwhile, up on the mountain, conditions were heinous. A storm was raging – snow was flying and visibility was near zero. The judges, who had been sent up to the summit to build a snow shelter, were turned back by the storm. Exhausted and hypothermic, they descended to the safety of the forest in white-out conditions. Judge Nathaniel Davis rushed down the mountain to Bellingham, arriving mere hours before the starting gun was to be fired. He confronted Mount Baker Club President Henry Engberg, urging him to call off the race. To send the mountain runners up into such a storm would be suicide, he declared. Reluctantly, Engberg agreed to postpone the race for a week, but warned that no matter what the conditions were like at that time, the race would not be postponed again.

A week later, the racers took off in the middle of the night so that they would be crossing the glaciers at dawn when the snow would presumably be firm enough to be safe. Paul Westerlund, a marathon runner from San Francisco was the first to reach the summit, but he had become disoriented and had sustained a broken rib from a fall. His clothes were literally frozen to his body. Unsteadily, he headed down but was soon passed by several racers, including Harvey Haggard. In the end, Haggard was the victor and race organizers, counting the till, were ecstatic.

In 1913 the weather was again miserable on the mountain.  The judges called down to postpone the race, but race organizers decided to run the race anyway. Confusion ensued. On their way down, in white-out conditions, the judges were surprised to encounter racers coming up the trail. Some of the racers turned back at a high saddle while others pressed on into the raging storm to the summit. Descending a glacier in the swirling mists, Victor Galbraith (Joe’s cousin) broke through the fresh snow and fell 40 feet into a crevasse. Only a small ledge kept him from falling to his death. Miraculously, after five hours on the ice ledge, he was rescued by his cousin Joe.  Another contestant, Jimmie Hayes from Boston, also fell into a crevasse but was able to claw his way out.

The race ended in chaos and confusion – everyone realized that only sheer luck had prevented fatalities. After three years, the Mount Baker Marathon was dead.

Turning this epic tale into a film was a daunting task.

“We needed to be able to film from airplanes and helicopters and shoot runners on the glaciers of Mount Baker,” Director Warger says. “We needed a train and automobiles from 1911. Logistically, it was overwhelming.”

And expensive. Neither he nor cinematographer Lowrance had particularly deep pockets. What they did have, in abundance, was faith in themselves and their project, as well as a passion for story-telling and history. With a tenacity that rivaled that of the original mountain runners themselves, they set to work, determined to tell this amazing story.

Their optimism was contagious.

Planes, trains, wardrobe and cars were donated.  Storyboards were drawn up. Actors and camera crews volunteered and filming began.  Brian Young, a veteran director with Jet City Films was enlisted as co-director/producer.

William B. Davis, the notorious “smoking man” from the X-Files TV show was cast as Mount Baker Club president Henry Engberg, who had famously insisted that the race carry on despite the perilous conditions.

“I wanted a strong recognizable actor for the scene,” Warger explained. Davis, who lived across the border in Vancouver, BC, enthusiastically joined the production.

Warger also wanted contemporary runners and climbers to provide commentary. And he wanted the best.

He recruited Krissy Moehl, Grand Slam Ultra Runner and holder of the women’s record on the 103-mile Mont Blanc traverse. Her participation prompted Scott Jurek, seven-time winner of The Western States Endurance Run to sign on to the project.

Marathon runner and author of Second Wind: Seven Marathons on Seven Continents, Cami Ostman agreed to participate in the film, as did local Ultra Runner Doug McKeever, who had summitted Mount Baker…68 times!

In addition to the runners, speed climbers were enlisted to weigh in on what conditions might have been like high on the mountain during those wild and wooly days back in 1911. Two of the best, Steve House and Chad Kellogg agreed to be interviewed. House has been at the top of the pantheon of speed climbers since his dramatic solo ascent of K7 in 2004. Kellogg is a Northwest legend, holding speed records for ascents of Mount McKinley and Mount Rainier.

“They are two of the top climbers out there,” Warger explained. “Their insights on mountain conditions illustrate what it may have been like running on snow and ice in freezing storms and whiteouts.”

The three years that Warger has devoted to The Mountain Runners have had a profound impact on him.

“What changed my life in this process,” he declares, “was the outpouring of support from so many people. They believed in the project so much that they pushed aside financial gain and said, ‘What can I do? I want to be a part of this.’ Unbelievable support.

“The belief in my dream has overwhelmed me. It truly has inspired me.”

You can be inspired too, by catching one of the festival screenings. Vancouver is the closest… but Graz might be more fun.