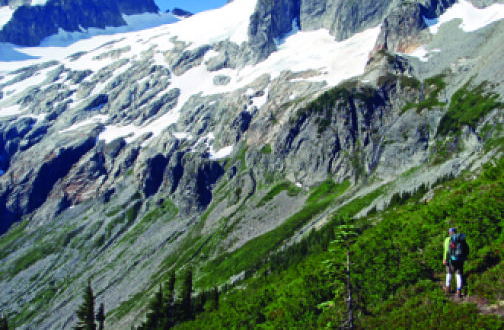 Mountaineering in Goatland: The Ptarmigan Traverse

Story and photos by Laural Ringler

Duct tape. I had awakened to small feet clawing through my hair as a critter ascended my head, leapt over my face, and continued across my sleeping bag. I fumbled for my headlamp, its sudden light illuminating a two-inch hole in the foot of our tent, a mouse nose sticking though it. Duct tape the hole, my sleepy brain responded. And that’s a fast mouse that’s already out again, I thought next. My husband swore.

I duct taped the hole from the inside, while Tom batted mice off of the tent. They were climbing up the mesh door like marauders gaining a castle’s walls. He sent individuals airborne as though he were playing handball. And still they came. The rest of their horde tried the tent walls, losing purchase when the incline became too much and sliding back down to the ground. The siege continued until our need for sleep after a seven-hour day of backpacking, scrambling, and glacier travel overcame our future need for food.

We hauled out everything edible, and packed what fit into the cook pot. We piled rocks on the lid as further discouragement, and figured the leftovers would be sacrificed. With the food now thirty feet away, I duct taped the mouse-shaped hole in the tent from the outside as well, and we tumbled back into our sleeping bags. The mice apparently preferred the challenge of stealing food from under our feet, since they didn’t bother once we moved it. Regardless, the attack did not recommence and we slept.

Camped at White Rock Lakes, our third night into the North Cascades’ Ptarmigan Traverse, we had noticed earlier that the animals there were much too habituated to humans. A marmot had ambled up to within a few feet of me after I’d gotten water from the lake, and a doe had stuck around at dinnertime even after Tom had thrown stones in her direction. Above tree line, there’s no option to string up the food, so you either cache it outside, or hide it in the bottom of a pack in the tent. We made the wrong choice that night.

High backcountry travel among Cascade peaks is rugged, isolated, spectacularly beautiful, and on this trip, crawling with animals. To begin, we had to gain Cascade Pass and then ascend further on a climber’s trail. On that section, I startled a ptarmigan and her chicks in the heather. It was fascinating to watch their defensive behavior, the chicks scattering and then freezing in the face of a potential enemy, while the mother tried to get me interested in following her as a decoy. I eased away and around, thinking how lucky I was to see a ptarmigan on the Ptarmigan Traverse, and not realizing the encounter would be the first of an extraordinarily animal-rich journey.

Just short of the ridge, I noticed goat scat, so I called to Tom and slung my pack down. I was carrying a goat kit issued by Western Washington University researchers studying mountain goat dispersal patterns. With specific directions on how to swab and collect goat pellets, I would collect samples and they would analyze the DNA back in the lab. Tom penciled a “P1” on our map to note Poop #1’s collection point, while I reread the directions, swabbed, bottled the swab in a provided vial, collected the pellet, and rated items such as the consistency of the sample. Finally (I would get much more practiced at the routine), we were on our way again.

Tom had spent the morning driving our car, with two bikes and a Burley trailer on it, a couple hours from our house to the road end nearest our trek’s finish. Then he rode the tandem bike with his single bike in the trailer down a car-impassable, washed-out dirt road, locked up the tandem and the trailer at the foot of the trail to be available when we finished the hike, and biked back out past our car to Highway 20. My parents provided the shuttle for me, we picked him up, and then continued on to the trailhead. It had been an active day for him even before we started down the trail. So he was very patient with the scat stop, also given that it was after 4 pm and we still had to cross a glacier, gain Cache Col, and set up camp at Kool-Aid Lake before dark.

We reached the lake a couple hours later, led in by a family of goats. The two adults ambled along eating, while the younger animal raced back and forth between them. I am about to collect the freshest scat possible, I thought. But it turned out that none of them were willing to contribute so immediately to the project. We set up our tent and made dinner, while the goat group wandered around the perimeter until after dusk.
Shortly after we started out the next morning, sign of the goat group was spotted, and I broke out the kit again, while Tom penciled in “P2.” Ten minutes later came “P3” and not too much later “P4.” Tom began to look slightly exasperated. “Do we have to stop for every pile of goat evidence? We’ll never get anywhere!” He had a point. I also only had a finite number of swabs and vials, so when we ran out there would be no more “P” stops.

The Red Ledges looked like a sheer rock wall until we got close enough to discern details. A finger of snow pointing up looked like a possible way, so Tom scouted while I watched from below. When it thinned to where his ice axe poked through, he called back to let me know. “That’s okay,” I pointed, “we just need to get up to where the goat is.” A large mountain goat was lazily traversing the rock just above him. We down-climbed into the moat, the melted out gap between snow and rock wall, and then scrambled the muddy wet rock to what turned out to be a significant path, with “P5”, like a pot of gold at the end of it.

The rest of the day we collected views instead of goat scat. We traversed between Mount Formidable and Spider Mountain, and spent an hour on roped Middle Cascade Glacier travel, the snow soft in the hot sun. We continued the mixed travel, descending into Yang Yang Lakes, glimpsed as Caribbean blue-green from the ridge two hours earlier. It was a glorious day and we saw no other humans. On the entire route we would see only one other party of two, meeting more mountain goats than people.

The next morning, “P6” was on the ridge above Yang Yang, a welcome catch-my-breath stop after the climb up out of the basin. Then we roped up again for the LeConte Glacier, winding our way between crevasses under Sentinel Peak. South Cascade Glacier was more of a traversing stroll, with a distant goat a wandering white speck against the rock below Lizard Mountain. We finished the backpacking day around 4 pm, plenty of time to meet marmots and deer, and of course later that night, mice.

Despite the interrupted sleep, we were up and out early, the Dana Glacier above us. With a daughter named Dana, we were inclined towards it being our favorite glacier of the trip, but fresh bear prints sealed the deal. The evidence suggested the bear too had been enjoying the bluebird day, running and sliding across an undulating area almost at the top. We were mesmerized and scanned in the direction the prints pointed, but did not see the bear. Perhaps the animal disappeared towards the east to enjoy sliding on another finger of the Dana Glacier.

Lingering above the Dana, we snacked and discussed the route ahead, conscious of the fact we would only get to sleep out one more night, and that site would be below tree line, a completely different experience than the alpine we had been traveling. The goat kit exhausted, we walked more slowly and stopped often to stretch our time below Spire Point before the descent to Cub Lake.

The descent was loose and dirty scree, so we reached the lake hot and dusty. We took a dip in the cold water with a peek-a-boo view of Glacier Peak, before sweating up the treed ridge above Cub to camp. Another goat huffed and puffed by our tent at dusk. Tom commented on the goat’s heavy breathing, “Hey, we’re not the only ones who worked hard to get here today.”

Our final day began with a forested descent along Bachelor Creek, including a huge avalanche area where the downed trees lay scattered as though a giant had abruptly abandoned a game of pick-up sticks. Enough climbers had passed through that we could follow a faint path until Bachelor met Downey Creek, where we picked up that trail. We chugged downhill, missing the high country, and then popped out onto the no longer car-accessible dirt road that previously accessed the Downey Creek campground. Even that felt like too much civilization after days of alpine travel.
Our feet were hot, and we changed into sandals for the bike ride out, thankful not to have to walk the seven miles of dirt road between trail’s end and our car. As we slung our backpacks into the trailer, jet noise screamed into our ears and we watched, shocked, as a dark aircraft followed the Suiattle River and disappeared. A second came right after it, like Rebel fighters flying the trench to attack the Death Star. The high tech roar and streaking black shape assaulted the wilderness. I was glad the goats weren’t there to see it.