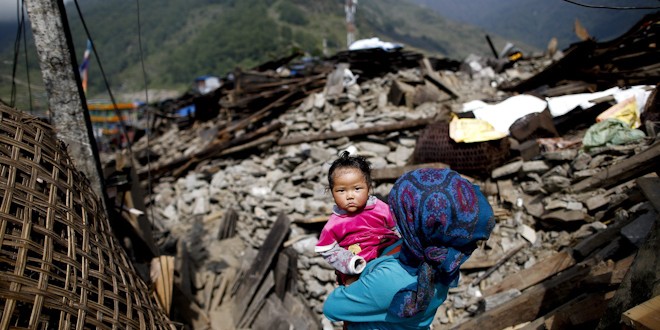 Northwest Climbers and Non-Profits Partner to Support Rebuilding in Nepal

The Pacific Northwest has a strong connection with Nepal – the climbing and trekking industries benefit both economies. Names of local legends like Jim Whittaker, Ed Viesturs, and Pete Athens echo in the thin air of Nepal’s high places alongside tales of Himalayan heroics on steep ice.  But this spring when disaster rocked Nepal it was another group of Pacific Northwest heroes that stepped up to make a difference half-a-world away.

When the 7.8 magnitude earthquake hit Nepal on April 25, 2015, University of Washington MBA graduate Jwalant Gurung was on the ground and experienced the devastation firsthand.  Jwalant is a member of Washington-based trek outfitter Grand Asian Journeys and his family has a long history of providing trekking services in remote areas of Nepal. Knowing that the earthquake would cut off the already isolated villages in remote areas, Jwalant sprang into action.  “The only way to get supplies to these areas is by helicopter or by foot. Helicopters are expensive and don’t carry much, so I chose ‘by foot’,” said Jwalant.  Only hours after the earthquake stopped rumbling, Jwalant had mobilized his guides and porters and started ferrying supplies across the mountains to the high remote areas of Nepal.

When I contacted Jwalant he was exhausted, spending his days procuring supplies in Katmandu, then trucking them to a point where he and his guides could load them into packs for the long steep climb to the villages in need. Jwalant said that the relief effort is difficult, but when the monsoon season comes it will be nearly impossible and he hopes to get as much of the supplies as possible to the villages before the rains come.

Jwalant has been supporting social and economic development efforts in these remote villages for over a decade. While a graduate student at the University of Washington he came up with an idea to guide charity climbs up the Pacific Northwest’s iconic mountains and to donate the funds to support the villages that make trekking in Nepal’s remote areas possible. Ten years ago Jwalant founded the 3 Summits for Nepal project and has raised over $200,000 for development projects. Climbers that go with 3 Summits get a guided climbing experience on one of the Northwest’s big mountains, paying only for personal expenses but agreeing to raise funds for the charity. The 3 Summits project has built schools, paid for teachers, and supported safe housing and education for orphans. After the April earthquakes funds will also go to relief and rebuilding efforts says Jwalant. On July 27-29 the 3 Summits project will lead two climbs of Mount Rainer and while all the climbing slots are full, donations are still welcome. Donations made to the 3 Summits project are tax deductible and 100% of the funds go to relief and development efforts in Nepal.

In addition to the 3 Summits project, Jwalant and Grand Asian Journeys’ co-owner Pam Perry will offer charity and development trekking experiences in the fall and early next year. Pam notes that support for disaster areas often wanes after the media stops covering the tragedy. The need is so great, she adds, that it is important to keep supporting Nepal.

A Pacific Northwest partner of Jwalant’s is the non-profit community based tourism outfitter Crooked Trails.  Crooked Trails has been doing development projects in Nepal for years and when the earthquake happened they were in a unique position to connect giving from the Pacific Northwest to villages that were most in need. According to Chris Mackay of Crooked Trails, the organization was able to raise $32,000 in 10 days. “That was enough to feed 1500 families,” she said.  Crooked Trails was the first relief organization in Chandeni, a village with over 1000 homes and provided each family with 69 pounds of rice, 7 pounds of dal, cooking oil, 2.3 pounds of salt, and 4.6 pounds of sugar.  The organization also provided over $5,000 worth of tents and tarps for the villages of Gorkha and Okhaldhunga.

Chris believes that tourism can be a positive force in the world when people stay in the community and meet the locals. Trekkers that travel with Crooked Trails are expected to raise $500 for the community project that will be done while on the trek. This July she will be going to Nepal to discuss sustainable reconstruction with other nonprofits working in Nepal. The idea is to rebuild smarter with structures that will not only survive future earthquakes, but will sustain the people economically. Chris says the best thing someone can do to help Nepal is to travel there as the economies of many of these Himalayan villages are sustained by tourism. If you have been saving a Nepal trek for your bucket-list this, she says, this October, November, and December would be the perfect time to go.

Learn more about tax deductible donations to the 3 Summits for Nepal project.

Find out more about charity trekking at: Grand Asian Journeys or Crooked Trails.

One Sherpa Home: The Bellingham Connection

Local climber Dave Mauro has deep connections in Nepal. His successful bid to scale the Seven Summits (the highest point on each continent) ended with a triumphant ascent of Mt. Everest on May 20, 2013 (see “Reaching the Sky” in our Autumn ’13 issue).  When news of the catastrophic earthquake reached Mauro, he immediately thought of the Sherpa who had helped him reach the top of the world, Mingma Chhring Sherpa. He soon learned that Mingma’s home village had been hit hard. Mauro knew that he had to help. So he began planning a trip to Nepal to offer assistance, as soon as the monsoon season had passed.

“What we hope to do in Nepal falls under the ‘teach a man to fish’ doctrine,” Mauro explains.  “Our team, comprised mostly of Bellinghamsters, will travel to Nepal on October 4 of this year. We will trek to the village of Phortse (12,600 feet elevation) in the Khumbu Valley. Over the 10 days we are there, we intend to rebuild the home of Mingma Chhring Sherpa, the Sherpa who climbed Everest with me. Our team will be broken down into subgroups leading various aspects of the construction effort. The 40 local Sherpa we hire will rotate through these stations to assure that each receives a full education on this process of home construction; a process we believe will hold up to the next earth quake. These 40 Sherpa will be paid what is considered a generous daily wage in Nepal, such that each will have enough money to feed their family through this winter. When work is completed we will gift all tools to the village elder.”

Mauro’s goal is to raise $12,000 for the rebuilding effort – as of the beginning of July he has raised more than $9000. To contribute, visit  http://www.gofundme.com/onesherpahome.