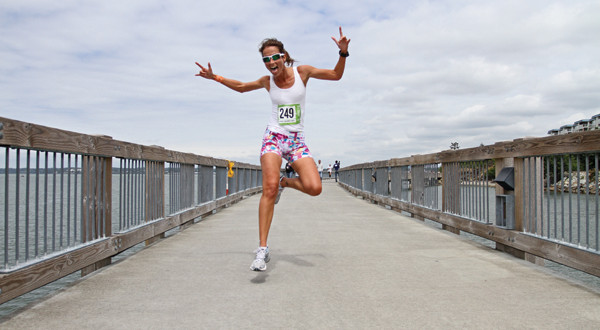 If you’re looking for a running event that provides an once-in-a-lifetime experience as well as a challenge for your body, look no further than the Ragnar Relay Northwest Passage. Ragnar, as it’s fondly known, is a 190-mile relay race through some of the most beautiful scenery the Pacific Northwest has to offer. In fact, some of the most beautiful scenery in the United States. This race attracts hard-core runners and weekend enthusiasts alike, all starting on Friday morning, July 20 at the Peace Arch at the Canadian border in Blaine and ending after 24-life-changing hours in Langley on Whidbey Island. As relay races and other specialty running events become more popular in the United States, Ragnar – and especially its Northwest Passage event – are unmatched.

The relay is made up of twelve runners in two vans that leapfrog each other so that each runner takes on three different legs over the course of the 24 hours. If you’re extra hardy, there’s also an option to have a team of six (or fewer) where each person runs roughly the equivalent of a marathon over the course of the race. For those inclined for a little shorter mileage, the runners on the 12-person team run about 15 miles each, broken up into three legs. Some teams take it seriously, some not so much. Teams with names like ‘Must Finish Alive’, ‘Sucking Wind’, and ‘Runnin’ From the Law’ run alongside teams from running groups, high schools, and various running-related industries. Teams come from all over the United States to compete and have a good time in a beautiful setting.

Half the fun of the race is the people watching. Runners of all ages and fitness levels wear tutus, animal costumes, bowties, and assorted wigs and hats as they run. Teams really do their best to outdo one another – not only in speed but in style and passion. Last year, there was a team called ‘Lord of the Ragnar’, all dressed in costumes straight out of Middle Earth. It’s not every day you see Gandalf running through farmland, battling Gollum and Orcas in between stages. And it’s not only the runners who are tricked out; the vans are also decorated to the hilt with slogans (“Looks like Vegas, smells like Detroit”), number of “kills” and various thematic decorations. You’ll often see a van or two parked along the road, participants outside to hand their runner a refreshing beverage, take all manner of embarrassing and/or awesome photos, and to generally cheer on their teammate and other runners.

The big exchange points where Van One and Van Two hand off make for some of the best people watching. Dozens of bodies litter the ground, desperately trying to get some sleep before the next round. Those that aren’t sleeping are probably thinking about it, but may be eating, rubbing sore muscles, or calculating just how long they have before they have to start running again. The exchange points are the great equalizer; the teams going for time and the teams just going for a good time are all there, trying to catch a snooze and a snack. Ragnar isn’t your average running race, but neither are its participants. It’s a whole new way of enjoying running.

Van One starts its day at Peace Arch Park in Blaine. There, teams decorate their vans, put on their crazy clothes and game faces, and otherwise prepare themselves for 24 hours in a van together. The teams start in waves beginning at 7:30 am, continuing throughout the day with the fastest teams starting last. The six runners in Van One take turns running through Blaine, Birch Bay, Ferndale, and Bellingham, handing off a bright orange slap bracelet. Team members run alongside busy highways, on peaceful country roads, and on trails; through Bellingham, across the Skagit Flats of Bow and Edison, winding their way under canopies of green trees and over rolling hills into Burlington.

After some rest and some fresh clothes, Van One runs out of Burlington, through Mount Vernon, and on towards La Conner. All too soon, the vans and the runners, equipped with headlamps, enter La Conner to meet up with the other half of the team. Most teams pack up immediately to get on the road in order to sleep what remains of the night away at Deception Pass State Park. Nothing prepares you for another long run like sleeping on a tree root or in a crowded, stinky van, your only source of illumination the strand of Christmas lights hung just above your head.

While their teammates “sleep”, Van Two runs out of La Conner, heading toward Anacortes on its way to the next handoff, just on the other side of Deception Pass. Running across the Deception Pass bridge in the middle of the night with only van lights and your own headlamp to keep you company is a strange and unique joy. Equal parts soothing run and terrifying mind-blower, the night runs are an exercise in keeping your eyes, and your mind, squarely on the road in front of you and away from all of the ‘B’ horror films you’ve ever seen. In six years, not one runner has seen a masked man wielding a chainsaw running after them, but many run like there is. The nicest thing about the night runs, aside from getting the racers out of their comfort zones, is the gorgeous view as the sun comes up in the morning.

To start the final leg, Van One picks up at Deception Pass and pushes on across Whidbey Island, ending at Coupeville. For the early teams, the runners are greeted with the rising sun and a clearing fog – there is truly nothing more beautiful than peaceful Penn Cove at first light. After receiving the now completely disgusting slap bracelet in Coupeville, Van Two finishes the race in Langley after having run the rest of the length of Whidbey Island. The event culminates with a huge party at the finish line, complete with team photos, medals for all, a beer garden, and hundreds of hobbling, exhausted runners.

Ragnar isn’t just a race; it’s a mind-expanding, potentially life-changing experience. Whether you’re there to win it or just to have a good time in a gorgeous place, Ragnar delivers. As the motto goes, “Ragnarians Do It All Night Long”. Or maybe: “Run. Drive. Sleep? Repeat.”