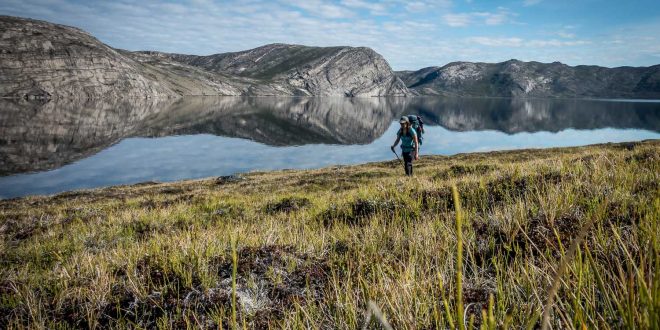 The Arctic Circle Trail (ACT) is a hundred-mile overland trek from the airport town of Kangerlussuaq to the fishing village of Sisimiut in west Greenland. It traverses from the edge of the Greenland ice sheet to the outer coast over a rolling landscape of Arctic tundra. We hiked it in August 2018.

Here are a few notes from our journal on the trip.

After a long day of preparation and logistical comedy, we score a bumpy shuttle ride out of Kanger, up a long sandy road to the edge of the ice. Our first camp is near the massive ice wall of the Russells Glacier, actually the toe of a relatively miniscule offshoot of the unimaginably huge Greenland ice sheet. We cook rice and lentils under a stunning pink 11 p.m. sunset. We take several hours in the morning to explore this unique spot before properly beginning our hike. The retreating edge of the glacier is in constant flux. It has created a waterfall running under a natural ice bridge, as well as exposing some beautifully tortured granite bedrock. Wary arctic hares browse around while we pack up.

How on earth did two Americans from the Pacific Northwest find themselves at this unlikely place? A bit of background: A series of connections and coincidences connected us with short-term jobs at a remote research facility on the top of the ice sheet. We worked at Summit Station for just a month, an unusual contract that finished in mid-August, before the high-latitude weather turned and made adventures like this decidedly chillier propositions. Since the company provided travel from the States, we were able to afford a trip that is made cost-prohibitive to many by limited and pricey flights to and from Greenland.

After several hours of rainy hiking away from the ice, we encounter our first muskox. A herd of seven, with two calves. The wooly ungulates eye us from the top of a hill, but allow a good look before they wander away. These holdovers from the ice age are an important part of the local economy. Their inner wool, called qiviut, is one of the softest, warmest natural fibers found anywhere. Apparel knit from qiviut is highly prized. Locals and international sport hunters also take muskox for meat. We hear it tastes like bison. Observing these gentle creatures with their hanging shaggy coats and upturned horns, suckling their young, grazing on lichen and sparring with each other, suggests a portrait of ancient Greenlandic tundra from long before humans arrived here from northern Canada.

The route transitions from sandy road to the thick tundra mat which soaks my (theoretically waterproof) shoes and makes our progress slow. At the end of the day we ascend to a high point on the ridge and set up the tent. We watch sheets of rain obscure the terrain in all directions while Abby cooks pasta over the PocketRocket. Our dessert is the same every night–we have arrived at the height of blueberry season.

As someone who reliably needs to stumble out of the tent for a midnight pee, the starry night sky is a new and welcome experience from the 24-hour daylight of the last few weeks. Gus is happy that I shake him to take a look, even if it means momentarily allowing the frigid arctic air to invade his sleeping bag. At this time of year the daylight shrinks by about 20 minutes each day, so today we get sundown at 10 p.m. and sunrise at 3:30 a.m.

At 5 a.m. we can no longer ignore the bright sun lighting up the tent, so we rouse ourselves with coffee and half-heartedly tend to packing up. This isn’t our first long trip together, so we easily navigate the tasking without much need for discussion–one of the pleasures of having a steady adventure companion.

The morning’s hike follows the south shore of Amitsorsuaq, a 12-mile-long lake, with banded cliffs on the far side reflected perfectly in the clearest water either of us have seen anywhere.

We stop for lunch at the Canoe Center, a long-ago-abandoned business venture with an impressive collection of jettisoned empty fuel canisters stashed away by other hikers. Trash removal is unfortunately a problem at all of the ACT huts. The guidebook mentions that canoes are sometimes available for use here, but we don’t find any. 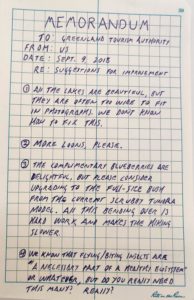 I pull together a lunch of powdered peanut butter and crumbles of Danish dark bread, now a staple for us. We eat under a blue sky, but eye ominous clouds across the lake. We navigate through boggy territory at the lake outflow through a long narrow valley, ending our day on the shore of the never-ending lake Tasersuaq. That evening, a juvenile arctic fox circles our camp to investigate the smell of our tortellini before making pawprints down the beach away from us.

An early start lets us leap-frog a British hiking club of about 12 members as they break down their camp at a beach just over the next bluff. With that crowd behind us for good, we climb towards a series of rocky outcrops that top out at about 1200 feet, the high point on the route. We suffer a stiff wind for a panoramic view of Tasersuaq before dipping down into a valley of small, interconnected lakes, terrain which feels like the subalpine of our home mountains, the North Cascades. We find ourselves overlooking the wide valley of the Itinneq River, and we need to choose between camping early and pushing hard to ford the river and move out of the lowland to the next hut. We elect to push; it’s sunny now and it might not be tomorrow.

The river is waist-deep and icy, but the crossing proves simple and our travel underwear benefits from the rinse.

We end our day walking along a small rocky ridge that leads us to the head of a fjord before gaining the last of the day’s elevation. Arriving at Eqalugaarniarfik Hut (Sound it out: Ee-Qua-Loo-Gar-Nee-Arr-Fik), we find a cast of characters packed like sardines in the bunks of the cozy space. Among them is none other than Paddy Dillon, the British author of the one and only English-language guidebook on the Arctic Circle Trail. He is back in Greenland after ten years to make updates. Our copy of his book is the Kindle edition, so he regrettably can’t sign it. He waxes about trekking on the Faroe Islands, the Azores, Malta. He may like to talk even more than he likes to walk. 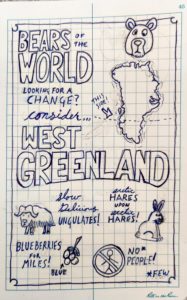 The ACT doesn’t see traffic at anything like the volume of any trail system we have hiked in the U.S. We have seen estimates of perhaps 1,500 users per year, which seems plausible. This is the peak of the season, however, and the huts show the strain of relatively heavy traffic. Even in winter, the route sees use by dog mushers, so the huts are frequented year-round. There are no pit toilets or outhouses. Hikers are expected to bury their waste. Used toilet paper is a particularly pernicious issue; we suspect it’s largely left by winter users who are simply unable to bury it properly in the frozen ground. We find nearly all the huts to be just a little gross, so we mostly avoid them and pitch our tent in more private locations. On this evening however, we elect to cook our instant mashed potatoes and lentils indoors, and engage in a little human conversation. Being out of the rain is a pleasant respite.

Hard rain traps us in the tent overnight for a solid 12 hours. When we finally emerge, the whole world is a soggy mess and there is fresh snow on the tops of the hills no more than a few hundred feet above us. The trail is so muddy that I abandon my hiking shoes entirely and slog the four-ish miles to the end of the valley in my Crocs. My feet go numb several times, but the stream crossings are greatly simplified.

Gaining a rise at the bottom of the valley gives a sweeping view of Kangerluarsuk Tulleq fjord. Sparse seaside cabins dot the far shore, the first sign of non-recreational human occupation since Kangerlussuaq.

The route follows the south shore of the fjord by traversing a steep and rocky hillside. Difficult stretches of mud make for slow going even here, where one might expect the steep terrain to allow good drainage. Toward the end of the day we ascend a gully, passing the best waterfall on the trail since the cascade at the edge of the ice sheet, a lifetime ago.

Near the top of the climb, we leave the trail and bump over a couple of rock ribs, where we locate The Best Campsite Ever™, a flat rock platform with an indescribable view of nearly the entire fjord a thousand feet below us. I spread out all of our soggy gear (nearly everything we’re carrying) to dry in the sun while Abby makes us tea using rainwater from a hollow in the rock. As the sun threatens to set we cook our last trail meal: Tortellini with sun-dried tomatoes, with red sauce from a tube of tomato paste.

As on any good trek, seeing signs that we’re nearing the end brings both a relief and a bit of sadness; our Greenlandic adventure is nearly over. The route descends through the narrow head of a valley and passes a single chair lift strung out on a bare hillside. There is no road here so we imagine an incongruous scene of snow machines, tracked vehicles, and dogsleds parked at the bottom of the ski hill while locals snowplow and slalom in the dark winter.

In typical Arctic fashion, sled dogs are chained to small hutches on the outskirts of Sisimiut. We hear their racket from a distance before we see a single building. We walk through a small city of them lounging in the sunshine. A bark from one sets off a chorus and it is clear that nobody can ever sneak into Sisimiut from this direction. The valley finally opens to overlook brightly-painted buildings clustered on rocky hills surrounding a natural protected port filled with ships, leading out to shining Baffin Bay.

After ten days of muddy trails, river crossings, caribou, foxes, and few other humans, it is startling and not entirely comfortable to find ourselves on a busy street corner scratching our heads over our enormous trail map as we consult the tiny road inset for the way to a hotel. We eye restaurants advertising meal specials to hikers on our way through town. We are ignored entirely by the local Greenlanders, and receive only sideways glances from European tourists milling around in colored jackets; red from one cruise ship, yellow from another.

The Seaman’s Hotel has exactly one tiny room left, with one twin bed and a bathroom shared down the hall. They wouldn’t normally rent this to a couple, but we cajole the clerk into wheeling a second bed in for us. We sip instant coffee and munch french fries in the cafeteria while they prepare the room, reveling in the simple joys of pack-free people-watching, indoor plumbing, and that ineffable satisfaction of an unlikely plan successfully executed. 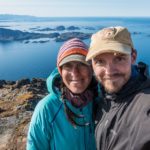 Abby Sussman and August Allen met in Antarctica and bonded over their shared distaste for gear stored externally on backpacks, bar soap, and jackets without pockets. They share a love of wild berries off the bush, aeropress coffee, and the tops of mountains. August’s photography has been featured in National Science Foundation publications and online resources. Abby has written for several local and national magazines. They have selected Bellingham as the starting point for their next adventure: A journey into Parenthood.