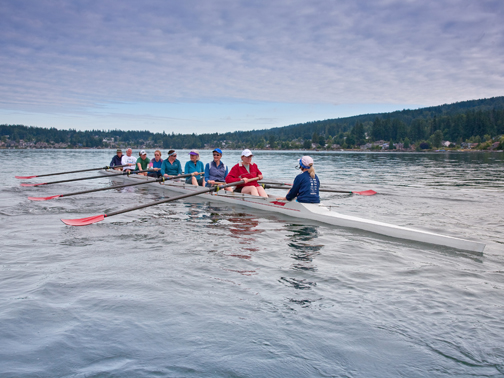 The vessel is 60 feet long, weighs upwards of 250 pounds and has eight metal oar-riggers sticking out of the sides like large, gangly elbows. Eight of us—otherwise known as novice crew members—heft the boat to our shoulders, four to a side. A couple short people quickly become superfluous as the boat gunnels ride a comfortable few inches above their shoulders, weight carried by the taller crew members’ frames, mine included.

As a result of a torn tendon in my left foot, the summer of 2011 had been looking rather dismal with regards to enjoying my usual passions of hiking and alpine climbing. When a friend suggested that my gimpness could probably tolerate rowing and that it would provide me with an alternative for exercise, my interest was piqued, though I admitted some skepticism that I would experience anywhere near the same physical challenges that mountain summers typically offered. After all, I thought, how difficult could it be to row a boat? 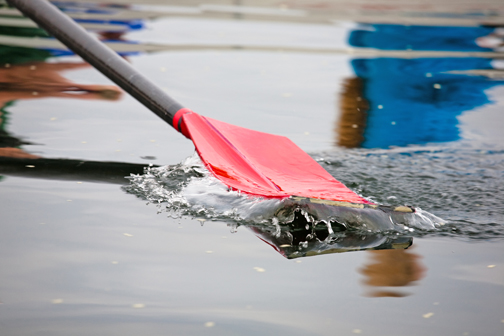 I learned quickly what every experienced rower knows so well: the physical demands of rowing know few rivals. Getting a rowing shell off its rack is the first of many challenges faced by most novice members of a crew, followed by, in our case, a long 100-meter walk to the water’s shore carrying our heavy, awkward load. Getting the boat and crew settled on the water was another skill on my steep learning curve. In fact, on that first day after placing the craft onto the water, the remainder of the 90-minute session was spent just in learning how to get the crew into and out of the narrow boat without all of us getting wet. Surprisingly, we did not take a single stroke on that day.

During my first year with Whatcom Rowing Association (WRA), I and my teammates met two to three mornings a week from June to November, as early as 5:30 a.m., on the waters of Lake Whatcom. Along with basics such as how to smoothly move on the sliding seat, the wrist-action required to feather and square the blade of the oar to the water had to become second nature; the position of the handle of the 12-foot oar dictating its catch, strike and movement through the water to its finish is key. Our coach, Lindsay, instructed us to “hold the handle at the bra line”—which took a bit of extra thought by the male crew members, but we figured it out. Still, we had to progress slowly, piecing together the essentials to make smooth rowing strokes.
We worked first in pairs, with the other six rowers in our “eight” setting the boat with their oar blades flat on the water’s surface, creating a training-wheels effect, then in a group of four, then with six. The repetitive, sometimes meditative, motion of the oar, keeping in strict unison with the rest of the crew, required my complete focus. There is no time to savor the eagle’s flight or the setting moon over the lake. Each rower had to hone the fine points of his or her stroke and work out the “crabs,” and through this individual concentration we gained confidence and unity as a team of eight, working as one. 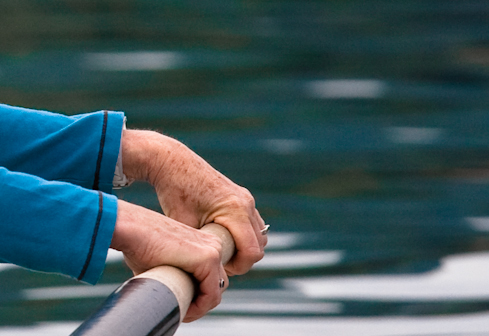 There is a language to rowing, a “rowing-speak” that one begins to learn with the first “up and over” command that initiates raising the shell to the shoulders. Once the boat is in the water, much depends on the “set” or “setting the boat”—the delicate action required of all team members to keep the tippy shell level in the water. “Catching a crab” is the potentially disastrous miscue of an oar on the water that can put the brakes on a fast-moving shell. We learned that nothing is done without a count of “in two….” Then there is the linguistically awkward “weigh enough.” Rowers do not ever “stop” an action, they “weigh enough,” as in, “in two….weigh enough” (stop rowing).
Or is it “way ‘nuff”? Maybe “weigh off”? I still am not sure.

In the Olympic Games, it can be said that rowers are the only athletes who cross the finish line backwards. Rowers look where they have been, not where they are going. Keeping the shell straight and the rear-facing rowers in sync is the job of the coxswain, who sits in the stern and faces the crew and the finish line. This is the narrowest, shortest part of the boat, so generally the job of a pretty small person. While not involving the physical demands of rowing, the responsibilities of the cox are enormous. In addition to their coach, rowers look to their cox for leadership, team building and motivation. 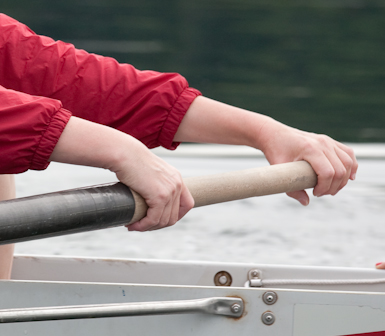 Somewhere during the fourth week, Lindsay gave Dot, our cox, the go ahead for the command, “in two…all eight.” At that point, under a pink, early morning sky, we were exhilarated with a surge of speed as eight rowers synchronized strokes and swiftly glided across the flat water of Lake Whatcom toward Agate Bay. Participation in a regatta, actually racing—as our coaches had suggested we would at some point be ready for that year—suddenly did not seem so out of reach.

Seattle’s Green Lake Frostbite Regatta is held every year during the first weekend of November. It is a favorite of regional rowing clubs, attracting hundreds of crews from the Portland area northward, and Spokane and Coeur d’Alene westward. Infamous for taking place in typically horrible northwest November weather, the event in 2011 was on a beautiful, sunny day with glorious fall colors reflecting off the lake. Of the four teams that WRA brought to the race, I was assigned to the four-person men’s masters sweep event. We were apprehensive. Only one of the four of us, Mark, had ever raced before, and that was thirty years earlier. Masters level teams are equalized somewhat by taking the average age of the team and factoring that with the finish time to come up with final standings. Our average age was 60 (youngest 53, oldest 71), and we wondered how that compared with our opponents, since everyone at the lake that day seemed to look younger than us. Most wore Lycra. 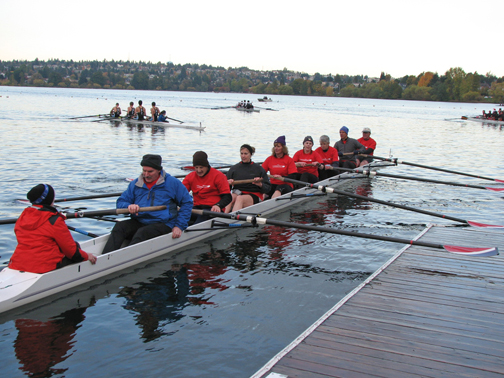 Our team’s goals for this, our first race, were modest. Who wouldn’t want to pull off a win? But we would be happy to just remain straight in our narrow race lane, row together, finish respectably. Dot was tense. She knew that the first important goal, keeping the boat straight between the lane markers, lay largely in her hands. Never having rowed between them before, we were intimated by the buoy lines. But we were confident in Dot; if we began to veer, she would make certain rowers ease-off and others power-up to keep us out of our opponents’ lanes.
As it turned out, our boat came in dead last. Our “age factor” would have moved us up in the ranking to second or third place, except for the fact that due to a registration error, our average age was listed as 53. So, we remain last in the official Frostbite record books. Our goals, however, were met. We raced, caught no crabs, and rowed straight down the center of our lane. Leaving Green Lake that day we were tired but smiling, knowing we had lived up to the motto of the WRA: “Row Happy. Race Hard”