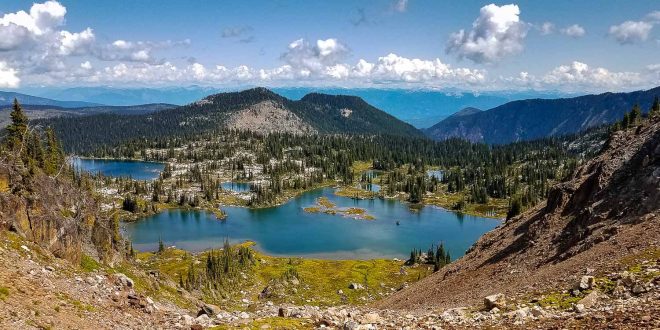 Having survived the tangled vegetation of Washington State’s Picket Range, my climbing partner Rick and I decided to set an entirely different goal by choosing a trip that started at or near treeline so we could avoid bashing our shins and having our glasses knocked off our heads while enjoying the outback. Rick did a deep dive into the mountaineering literature and surfaced with a real find, an entire range actually, that had been off our radar until now: British Columbia’s Monashees. Set in this 200-plus mile-long stretch of peaks, Monashee Provincial Park requires an eight-hour drive from Seattle, but boy, is it worth it! Imagine what the Cascade’s Enchantments must have been like for the first alpinists wandering there unhindered before all the restrictions were applied to preserve it. In the Monashees we traveled for days up and down ridges and past lake after lake without seeing a single soul (human or grizzly). Canada just swallowed us up; it is a very big place.

“Something hidden. Go and find it. Go and look behind the Ranges—

“Something lost behind the Ranges. Lost and waiting for you. Go!”

The trip to and from the Pinnacles had its own share of high points, including the opportunity to hear the one-part western, one-part highlander Okanagan accent; drives alongside enormously long azure finger lakes purportedly harboring the cryptozoid ogopogo; valleys devastated by the previous years’ forest fires; the bizarrely Mexican-themed town of Osoyoos on Canada’s southern border just opposite the frontier-themed towns on Washington’s northern border; signs officially proclaiming “Hitchhiking is Legal”; and the scenic North Cascade highway that Rick has often bicycled. It’s always good to have a climbing partner for whom cycling 5000 feet up on a bottle of water and a few candy bars is just a nice way to stretch the legs!

The trail to Twin Lakes starts at the end of a 27-kilometer drive up gravel and rutted dirt logging roads due north of Cherryville. Someone had carved a smiley face at the beginning of the path, which we took as a good omen. This destination, less than two miles in on the flank of Boulder Peak, is popular with weekenders but apparently not at other times, leaving it to just us and the miniature groundhogs/mountain squirrels.

Nevertheless, that evening we dutifully stashed our food far away from our tent in a bear-proof container and placed our pepper spray and ice axes within easy reach inside the tent door in case any hand-to-claw combat was called for in the middle of the night.

The trail faded away by the time we attained the ridge crest early the next morning but there were no obstructions beyond, for the foot or the eye. The tallest ground cover was the wonderful ten-inch high Anenome occidentalis, which looks like a Doctor Seuss creation. After testing some inhospitable routes ending in cliffs, we descended a previously overlooked scree slope down to a generous cluster of lakes, and from there, we climbed to a series of higher ponds until we successfully skirted the east edge of Neapolitan Knob and Wimpy Peak.

It was there we got our first view of our ultimate destination, 8,435-foot Mount Severide. Its series of ridges and a prominent snowfield of unknown steepness leading to the summit were a little daunting. All we knew was that there was a snow ascent, so we concluded that the chute to the right of the peak most likely was our route.

Deciding to make our approach from a lake on its western flank, we spent the day traversing the Monashees via rock swatchs, wildflower-filled meadows, and the occasional tree patch.

“The birth of mountains from the dust,

And these billion dreams.”

Long ago, this glaciated range, originating from a rare double subduction event followed by granite extrusions, had held its head above the 7000-foot thick Continental Ice Shelf covering Canada in this region. We were trekking where either the ice pack or the glaciers had receded or disappeared altogether, but not before smashing everything to pieces, leaving a thick layer of till and drift covering the area. Soil and lakes eventually formed in the basins, resulting in a rugged Eden. In fact, a Gaelic speaker who was mining in the area in the 1880s christened them “Monashee,” which roughly translates as fairy mountains.

We eventually descended a steep heather slope to a lake where, to our surprise, there was no indication anyone had ever pitched a tent. The next morning, we began the ascent of Severide, traveling diagonally along its broad northern escarpment. After crossing a prominent spur, we lashed on crampons and marched up the steep tongue of snow that led to the final massif.

A quick scramble led to the summit, where we were amazed at the sight of the magnificent southern Pinnacles: more dramatic peaks and azure lakes. A peep over the edge revealed a sheer three-thousand-foot drop, making Severide a candidate for base jumping.

The registry lodged in the summit cairn listed only eight parties in the last three years! That amounts to about six summiteers per year, again very surprising.

The descent included a joyous slide down the snow slope and a jump in the pool back at camp. We did a few sketches while relaxing after our adventures.

We awoke to an intermittent light rain issuing forth from a narrow but persistent band of clouds directly west. The Monashees are high enough to make their own weather by squeezing out any moisture that evaporates from the sunny valleys between them and the coastal ranges. It was a pleasant temperature for the return hike, but we decided to avoid the now windy and misty ridgeline route that we had initially planned in favor of the drier east side. The weather immediately improved, and we were once more in the land of nuttenhidenflickentailers and pixies.

After chatting with a pair of climbers heading for Severide, we returned to Twin Lakes, where we found several fellow campers from the nearby towns for neighbors as the weekend was getting underway. Everyone carried bear spray, although no one we talked to had ever heard of a bear sighting in these parts. No regrets from us on that point! But imagine our surprise when, returning to our car, we found its doors and windows muddied by bear paws. While we had been on the lookout for them, they apparently had gone looking for us! 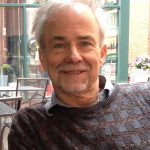 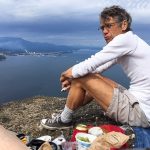