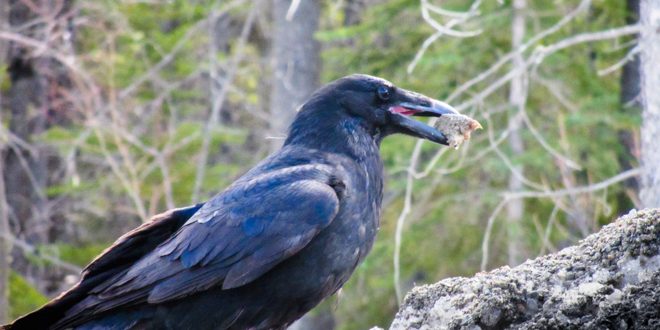 Ornithology in the Yukon Territory

This past spring I visited Whitehorse and a friend drove me to the Son of War Eagle Landfill a few miles outside of town. For local birders, this might as well have been Point Pelee, or even Brazil’s Pantanal.

“Last year I saw two uncommon species for the Yukon here—a Brewer’s blackbird and an American pipit,” my friend told me.

Shortly after we arrived, we saw a raven perched magisterially atop a huge pyramid of tires. The bird peered down at us as if he were the monarch of all he surveyed. On the mounds of garbage directly beneath him there were other ravens, one scarfing down a bagel, another with what looked like a dog biscuit in its beak and yet another trying to extricate itself from the plastic bag around its feet.

Despite the bag, I doubt the raven would have said, like Poe’s bird, “Nevermore.” A dump is a scavenger’s delight. Indeed, more than a thousand ravens spent the previous winter at the landfill. To keep warm, they did the equivalent of dumpster diving—periodically, they would thrust their bodies into the compost. Warm compost is much more effective than the specialized feathers on a raven’s nostrils in warding off the Yukon’s sub-zero temperatures.

Soon we were seeing magpies, Canada jays, Thayer’s gulls, herring gulls, lesser back-beaked gulls, ospreys, the occasional pine grosbeak and a few dowitchers, all perched on, pecking at or waddling around in heaps of human throwaways. Here was God’s plenty: fish bones, chicken carcasses, the corpse of a large dog or coyote and various other items no longer identifiable.

There were also bald eagles, dozens of them. For all their heroic reputation, they seemed perfectly at home in garbage. And why not? Old pizza crusts, moldy bread, dead animals and putrefying fast food offered them a far more varied diet than what they’d get during, for example, a salmon run.

I watched the eagles watching me with their sharp yellow eyes. Some seemed wary of a human-type being, but others appeared to be waiting for a handout. One eagle approached me and, in doing so, knocked aside a raven. This brusque gesture made me think of Benjamin Franklin’s remark that eagles are birds “of a bad moral character.”

But not all the eagles are rude to ravens. The landfill’s attendant told me he’d recently seen an eagle and a raven that were, in his words, “buddies.”

I asked if that meant they had an amorous relationship. “You can take it that way, yes,” he replied.

Increasingly, the eagles—like the ravens—are spending their winters here. The Yukon Bird Club’s Christmas Bird Count in 2006 listed only one eagle, but in 2010 there were 15. And in the Yukon winter, almost anything edible is fair game. Last winter, in fact, an eagle is said to have made an almost-successful attempt to carry off a Pekingese as the dog’s owner was unloading her garbage.

Natural selection among birds can happen fast , especially if there’s an opportunity for successful nesting and the easy availability of food. Among discarded bed frames, rotting plywood and old tires, the nesting sites are myriad, while a veritable smorgasbord is usually within pecking distance. To survive, most birds need to eat more than half their weight in food each day—not a problem at the Son of War Eagle Landfill.

Once we were on the road again, my friend made another suggestion. “Let’s go to the sewage lagoon,” he said. “A guy I know saw a tufted duck there a couple of years ago.”

Suddenly I had an uncomfortable vision of the not too distant future, a time when the majority of creatures both great and small might be relying on Homo sapiens for their room and board. At such a time, I could easily imagine  a raven, upon being queried about whether it wanted to live in the wild, shaking it’s head and exclaiming, “Nevermore!” 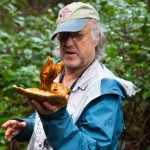 Lawrence Millman is the author of 17 books including the recently-published At the End of the World. His articles have appeared in Smithsonian, National Geographic Adventure, the Atlantic Monthly and Sports Illustrated. He has a mountain named after him outside Tasiilaq, East Greenland. He doesn’t own a cell phone and has never sent a text message in his life.