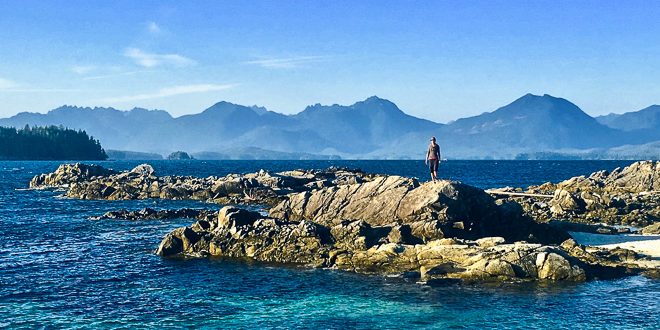 Paddle Hard and Stay Close: Exploring the Broken Group Islands by Paddle Board

Many of us are familiar with the ideas of canoe camping, sea kayaking and surfing. Now the fastest growing water sport in the world is merging these ideas into one incredible experience: Stand-up Paddle Board (SUP) Touring, blending the freedom of ocean kayaking with the adrenaline rush of surfing and the versatility of SUP. What more could you want?

The Broken Island Chain is an archipelago of over 100 islands on the west coast of Vancouver Island near Ucluelet. Its stunning stretches of white sand beaches and turquoise waters resemble a tropical getaway akin to the Caribbean, but it’s right here in British Columbia. I had heard about these islands and when I searched for images online, I felt like I had struck gold. That’s in Canada?! 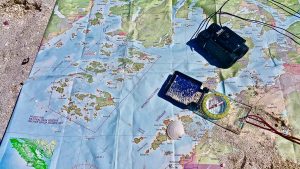 My current adventure buddies were into rock climbing and multi-day hiking. I approached the girls and said, “These islands are insane, what if we did it by SUP board?” Neither Sandra nor Ariane had ever even been on a SUP board, but they were intrigued.

That weekend we rented inflatable SUPs and headed to Deep Cove. The girls instantly fell in love and started researching boards the next day. The following months we got out on the boards as much as possible, paddling on lakes and up-wind on the ocean.  The girls even hiked up to Garibaldi Lake with camping gear and their boards strapped to their backs. They were the first people ever to paddle board on this glacier-fed lake, replete with  what looked like miniature icebergs!

And so it was that the expedition began to take shape. We would spend seven nights in the Broken Group, a trip never before traversed by SUP boarders.

I researched swells, tides and currents and routes that had been done by kayaks. I studied all the possible launching points. I talked to as many people as I could to get advice on gear, safety and secret gems worth checking out. The months leading up to the expedition I was buzzing with excitement. None of us had any experience paddling on the west side of Vancouver Island (which has a much bigger swell). There were four of us: myself, Ariane Tasca, Sandra Berubé and my partner Valtteri Rantala.

We arrived at the  Secret Beach Campground, planning to camp there and start paddling in the morning. The water was crystal clear and inviting and our excitement got the better of us, so we ditched the campsite, packed everything we needed onto our boards and heading out to sea that night. 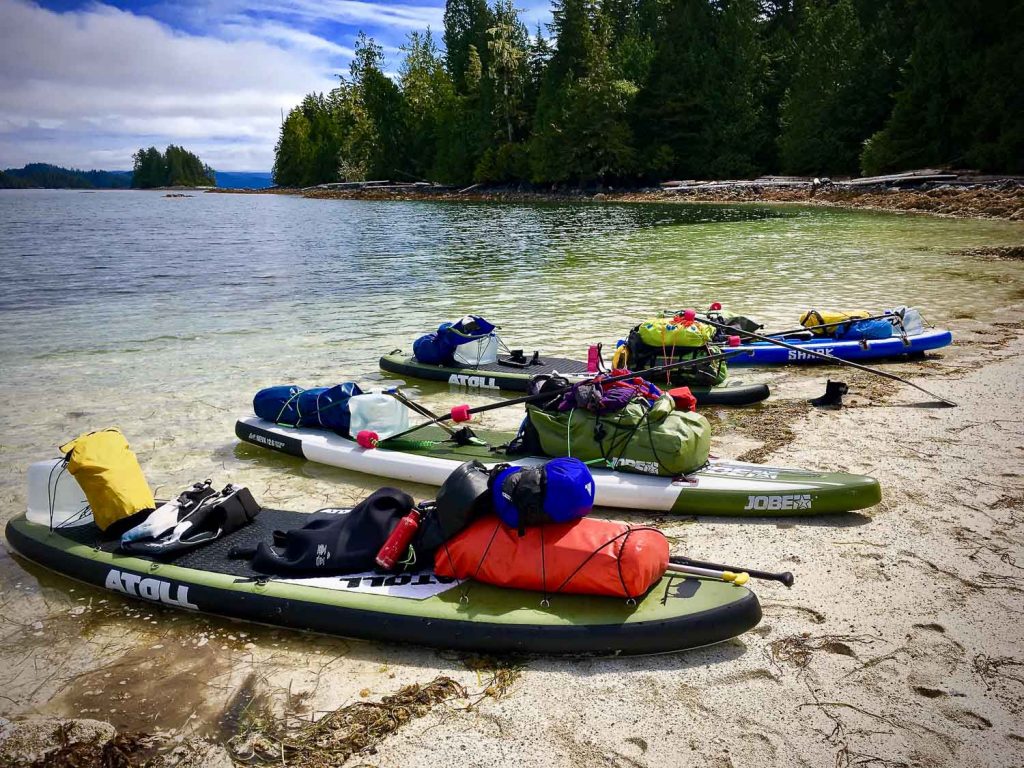 Stopper Island was only two kilometers away, so we figured it would be a quick paddle over, and it was! We arrived in the dark, set up our tents under old growth cedars and salal in the pristine silence of the island, all by ourselves.

The week that followed was filled with so many firsts for each of us—we had never explored the ocean like this before. We navigated with a compass through heavy ocean fog, exploring serene lagoons where we could perfectly see the ocean floor, and paddled against intense winds and waves.

The most exhilarating paddle was on a day trip to the aptly named Paradise Beach. The winds had picked up out on the water but in the protected cove it was warm and inviting. We spent the day on the beach, harvesting mussels and seaweed and exploring the tiny island. When the sun started setting we knew we had to get back to camp. But by now the waves were crashing continuously with white caps. We questioned our ability to maintain course, and we all were a bit scared. The fear however only added to the adrenaline. ‘Paddle hard and stay close’ was the plan. Life jackets, tow ropes, whistles, compasses—we were ready.

It was a roller coaster of a paddle: We got wet and the ocean clearly showed us who’s boss but somehow we managed to hold our course across the channel. And then the real fun came. We got to turn our boards and ride the white caps home. We even dared to stand and surf the continuously crashing waves. It was wave after wave, ride after ride; the perfect surf set. I’ve never had so much fun on a board before! When we finally arrived back to the campsite, the kayakers there were astonished that we had paddled in those conditions and made it home. They congratulated us with wine, invited us to dry off around the campfire, and share our venturesome tales. 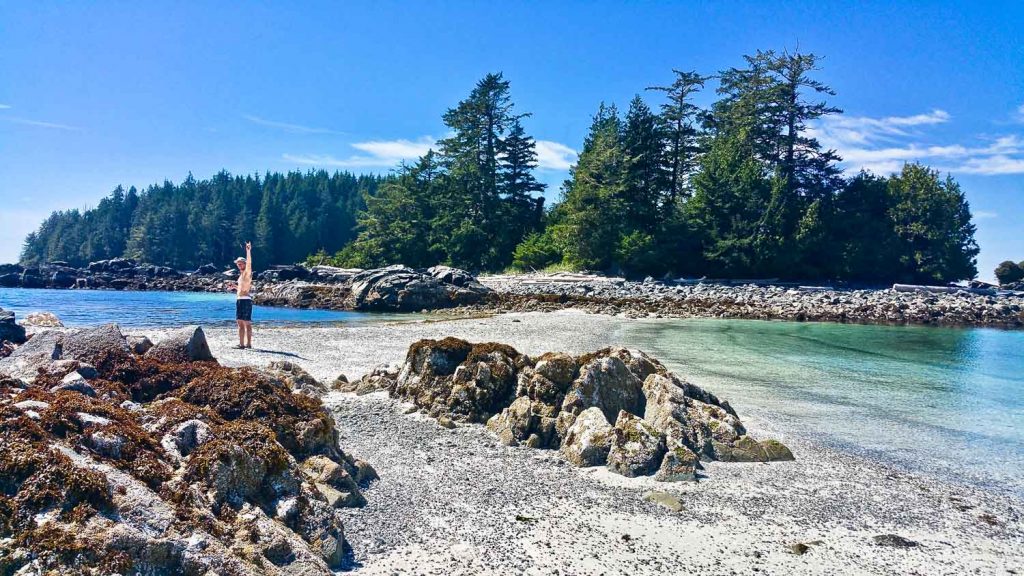 One day we were lucky enough to get  invited to the Native Reserve on Nettle Island. A Tseshaht First Nations family cooked us traditional salmon over the fire, shared their creation stories with singing and drumming in traditional regalia. Wanda Robinson, known as Tootunooisuks, had started the pilot project and is now accepting paddlers weekdays at noon for lunch and a chance to learn about their ancient culture and invite westerners into learning and honoring what was lost. She even gifted us with a hand-carved miniature paddle with Native art – a sacred keepsake we will treasure for years to come.

One night on Gibraltar Island we made an effort to stay up late to watch the Perseids meteor shower. While enjoying the shooting stars, bundled in our sleeping bags on the beach, we heard a splash in the water. A seal was causing a commotion. What we didn’t expect was for the splash to be fluorescent green. At 1 a.m., on a cold August night, we ran to our boards; we just had to paddle with the bioluminescence. Every stroke in the water caused a ripple of hundreds of little fish beneath the boards to shoot ahead of us, leaving glowing tracers! It looked like hundreds of green shooting stars under the board, mirrored by the meteor shower above. Sandra couldn’t contain her excitement and jumped in the water. It was alien and beautiful and completely magical. 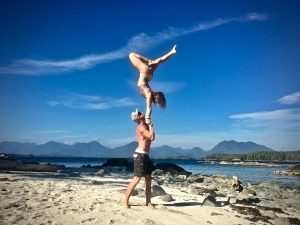 We camped on a different island nearly every night. We took our time, hiking, exploring intertidal life, and sea caves. Some islands had campsites that could accommodate 20-30 paddlers with well-worn trails and basic amenities. Other islands were wild with barely enough room for two tents. My favorite nights were when we were alone on the tiny islands. I felt so removed, and yet, so peaceful. The BC coast is so rich in edible abundance. We ate the biggest, juiciest mussels we’d ever seen, endless salal berries, and even nibbled on some edible seaweeds. We learned from the Tseshaht First Nation that they were considered the richest of the tribes, not because of material wealth but because the land and sea were so abundant with food that the people had extra time to devote to art. The treasure trove of tribal art they produced spoke eloquently to this cultural richness.

It’s so important that people get outside and experience what BC has to offer. Once you hike through an old growth rainforest, your position on logging will be forever changed. Once you paddle on the crystal blue waters of an archipelago, you’ll never want a tanker to risk its beauty again. There’s an incredible sense of peace that comes over you when you spend an extended period of time outside of cell phone service. You feel connected to something bigger. You feel grounded as a new perspective dawns on you. We might have been the first to paddle board this route, but I have a feeling we won’t be the last. 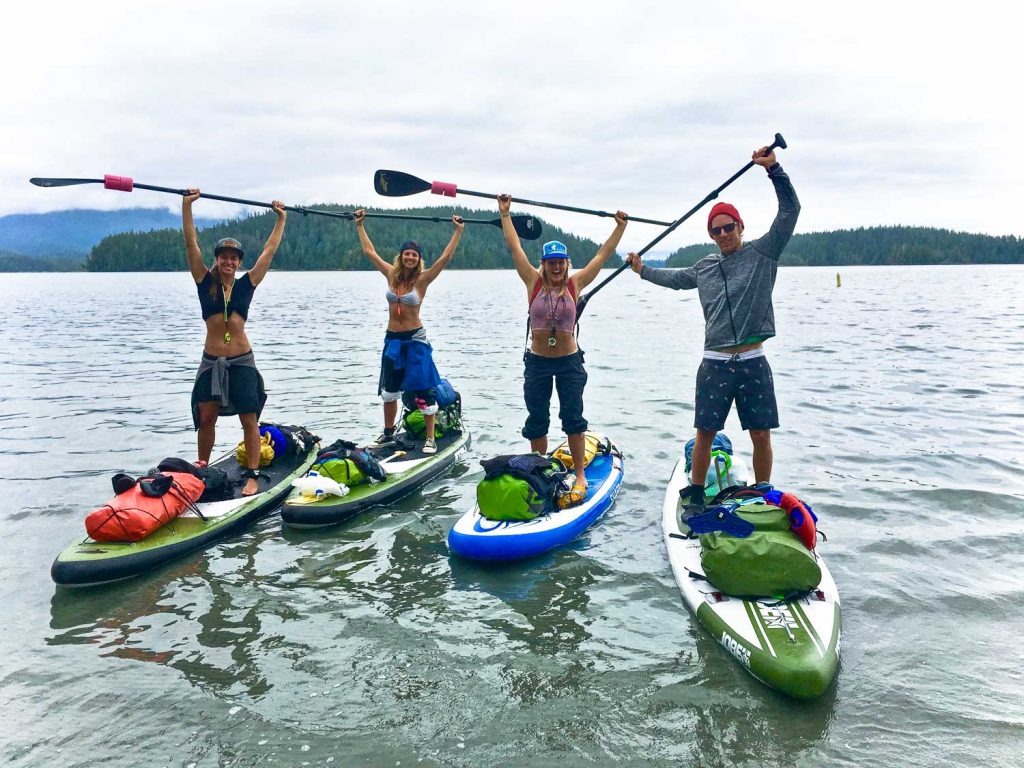 Stand up paddle boarding is a rapidly growing sport. With big wave riders, long distance races and incredible multi-day touring, like our remarkable adventure in the Broken Group, there’s really something in it for everybody. We all used inflatable touring boards for this trip, with our gear in a series of dry bags strapped to the board.

I love the versatility of paddle boarding. It’s a whole body workout that can be as gentle or as intense as you want it to be. The first time I tried a SUP board was with a grandmother in her late sixties in Portugal. It was her morning workout—a gentle paddle-showing that it is truly accessible to all ages. 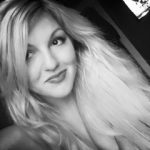 Aya Kristina Engel is a passionate outdoor explorer. Residing in Vancouver BC, with the mountains and ocean at her doorstep, she is keen to get outside in all her free time. SUP touring, hiking, camping, ski touring, surfing…you name it, she loves it all! She teaches AcroYoga and has been working as a circus acrobat for the last seven years.