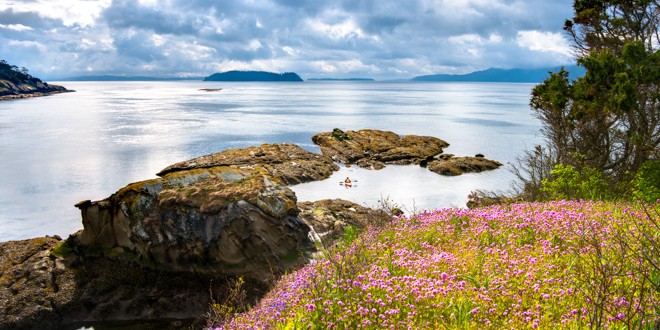 Paddling in Paradise: Protected Places on the Salish Sea

When I slip my kayak into Bellingham Bay, I sometimes choose a direction without a destination. Paddling is an end in itself and destinations require decisions. It’s like choosing between a slice of Oreo cheesecake and chocolate mousse. Can I have some of each? Not if they’re in two different directions.

If I do select a destination, my tastes lean toward protected areas and nature preserves because I like it when Nature comes first. What follows are a few of my protected favorites located in Whatcom, Skagit, and Island counties. 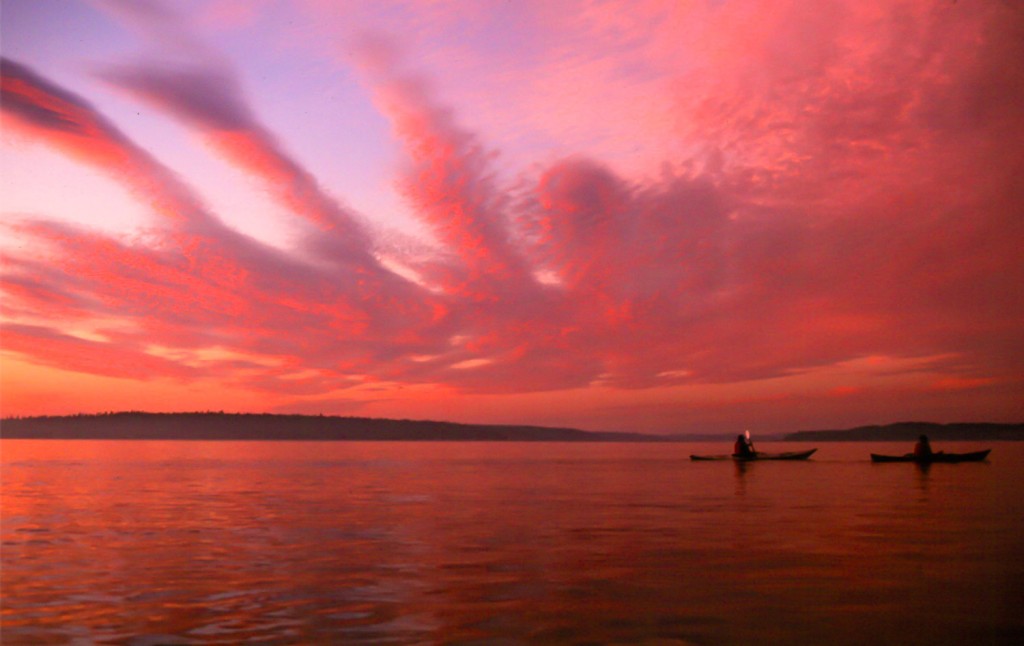 Paddling north from Cherry Point, I’m typically making a beeline for Semiahmoo where there’s a fun bar with tasty post-paddle munchies. In my zeal to get there, it’s easy to bypass a 1600-foot strip of beach bordering the exposed west edge of Point Whitehorn Marine Reserve. Point Whitehorn is a 54-acre block of ecologically sensitive forest, bluff and waterfront. Its thin beach abuts steep 100-foot cliffs built of glacier “till.” Landlubbers gain access by walking a ¾ mile trail from the reserve’s east entrance and descending a steep staircase down the bluff.

The beach is exposed to the Georgia Strait so visits should coincide with good weather and an incoming tide. I look forward to area wildlife sightings such as loons, cormorants, gulls, grebes, porpoises, and the occasional orca. After a (hopefully) smooth take-out, it’s fun to explore tide pools brimming with purple and orange starfish.

Point Whitehorn is just north of the British Petroleum Cherry Point Oil Refinery. In an effort to protect state-owned aquatic lands of significant natural value, the Department of Natural Resources (DNR), designated the refinery’s waterfront and surrounding shoreline as Cherry Point Aquatic Reserve. Cherry Point Reserve encompasses beach from the refinery up to Birch Bay State Park, south to the Lummi Nation, and 1/2 mile out from the shore out into the Strait of Georgia. It’s the only aquatic reserve in Whatcom County that provides habitat for juvenile salmon, Dungeness crab, great blue heron, bald eagles, and migrating seabirds.

The western panorama off Point Whitehorn juxtaposes sunsets, oil tankers, the San Juan Islands, orca, a variety of birds, and refinery activity along Cherry Point’s long dock. It’s an unusual combination of sights that stirs as much controversy as appreciation. Learn more about Point Whitehorn at the Whatcom County website.

East Park Entrance: Take Exit 266 off I-5 toward Custer and drive west on Grandview Road for 8.5 miles. Follow the road as it curves left and becomes Koehn Road, then continue another half-mile to the parking area. The ¾ mile walk is wheelchair-friendly but access to the beach requires descending a steep set of stairs.

Kayak Put-In: Take Exit 266 off I-5 toward Custer and drive west on Grandview Road for about 5 miles. Turn left on Kickerville Road for another 1.5 miles, then turn right on Lonseth and left on Gulf Road. Gulf Road ends at a primitive beach where you can park for free. 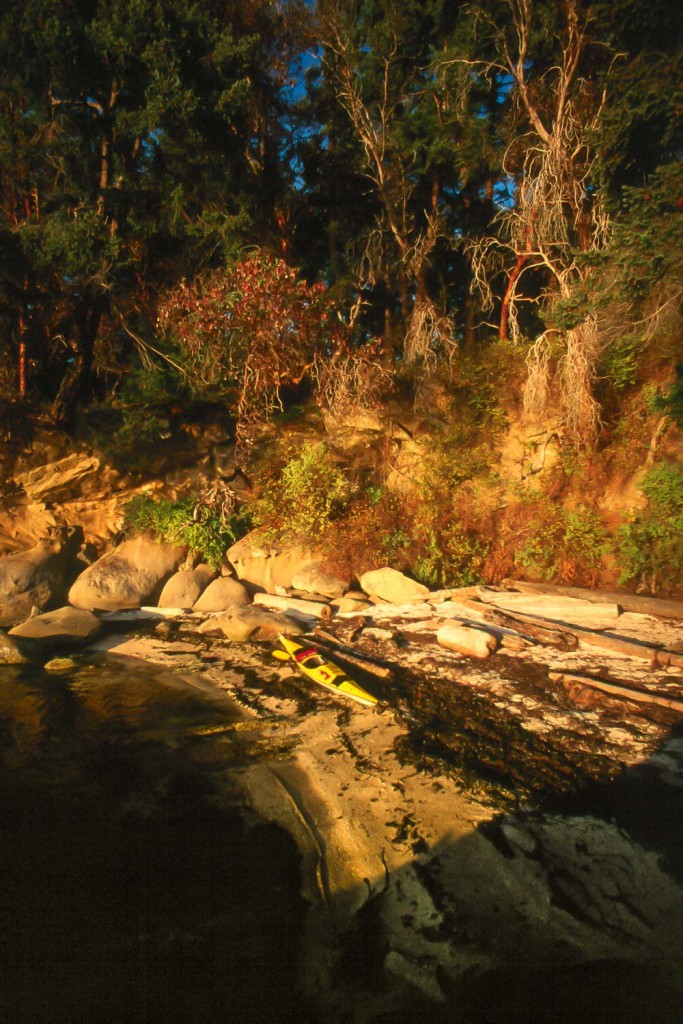 Chuckanut Island sits in the middle of Chuckanut Bay a few miles south of Bellingham Bay and just north of Larrabee State Park. This Nature Conservancy preserve, also called Dot Island, is a favorite with local paddlers and outfitters despite the fact that most of them don’t use its proper name. The beloved 5-acre dot is officially known as the Cyrus Gates Memorial Preserve, named in honor of its original owner, public parks philanthropist Cyrus Gates.

Between Chuckanut Island and the north shore of Chuckanut Bay there’s another designated sanctuary known as Bird Rock. This granite promontory is a migratory bird waystation and also a popular haul out for seals. It’s fun to circumnavigate tiny Bird Rock at a distance due to the pungent odor of ammonia.

Paddling Georgia Strait to and from Chuckanut Island is often as memorable as the destination itself. Sandstone cliffs rising straight up from the water are weathered with spectacular honeycomb formations. Expensive homes perch on top of the cliffs, sharing their views with bald eagles and herons. 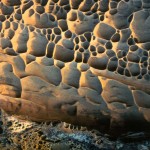 Although the paddle to Chuckanut Island is rated as easy, kayaking anywhere on the Georgia Strait should never be taken lightly. The cliffs offer very little in terms of shelter. A sudden blow can make it a battle to remain upright. It’s a good idea to schedule trips early in the day before the afternoon winds have a chance to build. Kayakers typically launch from Marine Park located at the foot of Harris Street in Fairhaven, or from Wildcat Cove in Larrabee State Park.

Larrabee State Park: Take Exit 233 off I-5 and head west on Fairhaven Parkway. Turn left on 12th Street, bear left at the next intersection and continue south approximately 5 miles. The road name changes to Chuckanut Drive. Turn right at the boat launch sign onto Cove Rd (approximately 1/2 mile before entering Larrabee State Park). Drive down Cove Road across the railroad tracks and turn left. Continue south and follow the boat launch sign to the parking area at Wildcat Cove. 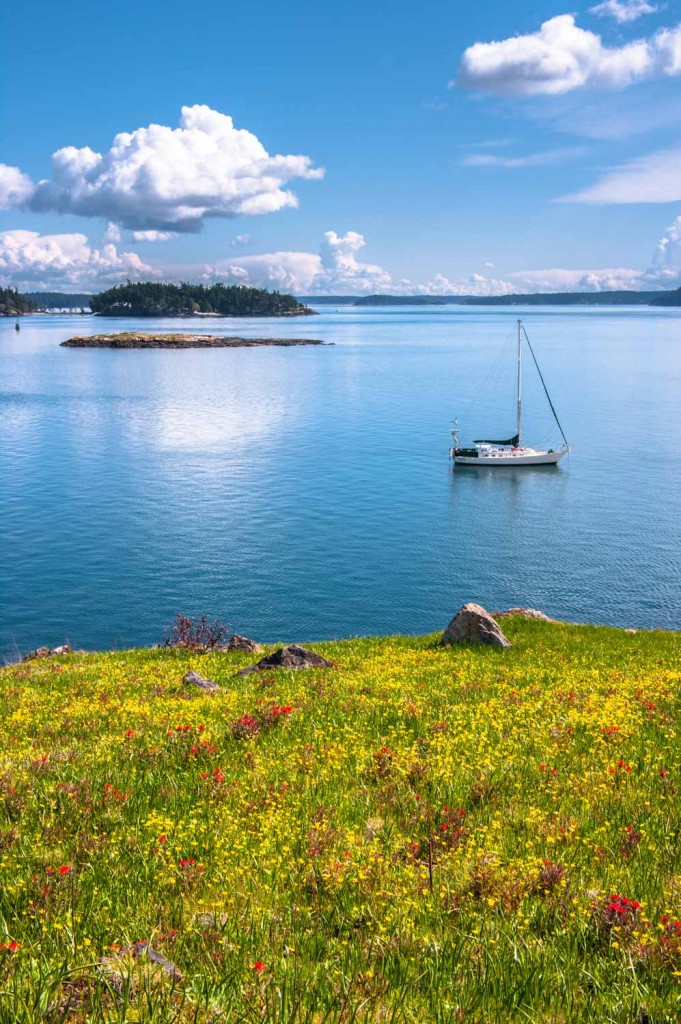 One of my first kayaking destinations was the 11-acre preserve known as Yellow Island. Yellow Island is one of a group of mostly-private islands known as the Wasp islands (named not for the stinging insect but rather by the Wilkes Expedition of 1838-42, in honor of their sloop, Wasp) located on the southwest side of Orcas Island in the middle of the San Juans. The Nature Conservancy purchased the island in 1979 to preserve its rare fescue landscape uncontaminated by grazing livestock or non-native invasive plants. Hummingbirds and several species of songbirds nest in the island flora. The only mammals seen running around are mink and river otters.

The Conservancy employs a full-time steward who maintains a simple, bare-bones cabin at the southwest end of Yellow island. Island stewards greet visitors, manage and protect the island ecology, and participate in wilderness studies when asked. Only six people may visit the island at any one time, making it necessary to reserve appointments during busy spring and summer tourist seasons.

My visit coincided with the arrival of about 30 harbor seals hauled out on the west spit. They entertained us with a cacophony of barks and groans until we returned to the quiet east meadow where delicate grasses rippled in a freshening wind. And speaking of wind, Yellow Island is one of the more exposed Wasps. Wind conditions can generate significant afternoon chop and tide rips. It behooves the wise kayaker to plan ahead and keep checking the weather.

For a day excursion, kayakers often launch from the public dock at Deer Harbor Marina on the southwest side of Orcas Island. The marina charges a fee to put-in and to park, payable at the store. Overnight parking is permitted. Check the Nature Conservancy website for more information. 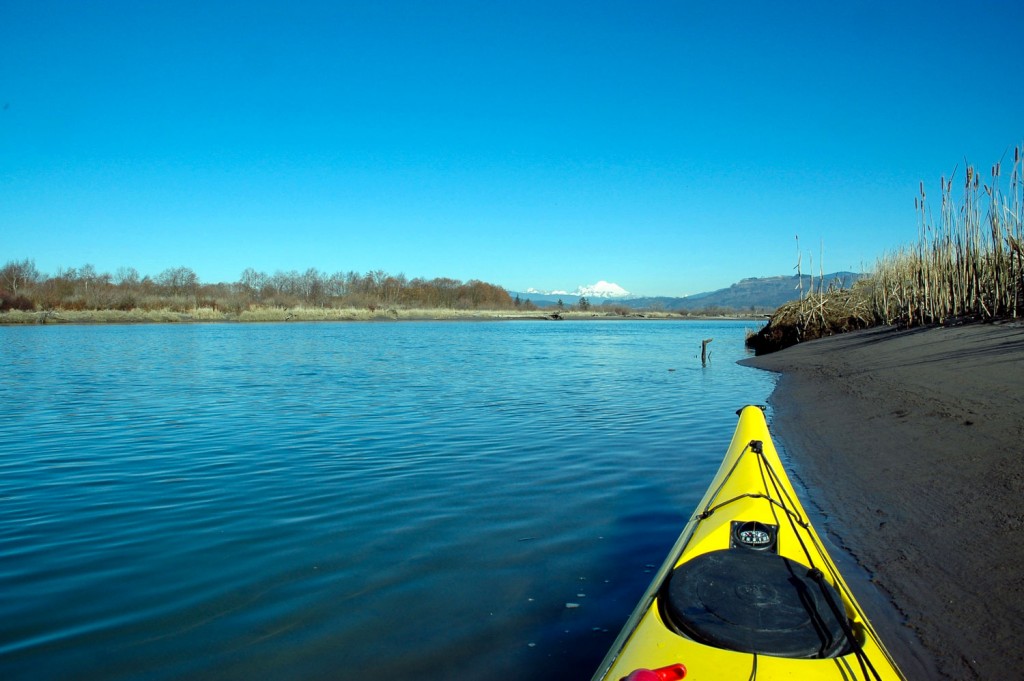 You say Puh-dill-Luh and I say Pah-dee-Yah. Padilla (like tortilla) is the Spanish word for ‘breadpan’ – making mine the more accurate but not necessarily most popular pronunciation. The Padilla Bay National Estuarine Research Reserve (created in 1980) is part of the intertidal Skagit River delta where the Skagit River meets the Salish Sea. It was named by early Spanish explorers because of the abundance of food in the area.

The estuary is enormous, eight miles long north-to-south and three miles across. Centuries of river sediment have built 11,600 acres of muddy, sandy intertidal ecosystem of which 8,000 are covered in eelgrass. Eelgrass provides an ideal habitat for small salmon, crab and other invertebrates. Shallow estuary waters teem with plant and animal life that feed hungry herons, ducks, black brants, eagles, otters, seals and more. The bay averages a high-tide depth of 6 to 8 feet but at low tide it is easily walked. Because of the bay’s shallow depth and tidal extremes, paddlers must carefully judge their timing to avoid being beached.

Like Lake Terrell (see below), Padilla Bay benefits from its location along the Pacific flyway. Bird photographers plan their winter excursions in hopes of catching thousands of resting snow geese as they suddenly take flight. Their beating wings produce a stunning visceral thrum surpassed only by the breathtaking sight of a vast, undulating white sheet rising into the sky.

One of the easiest put-ins is found at Bay View State Park. Located near the hamlet of Bay View,  the park borders Padilla Bay and requires only a short walk from parking lot to beach. Visit the Padilla Bay website for more information. 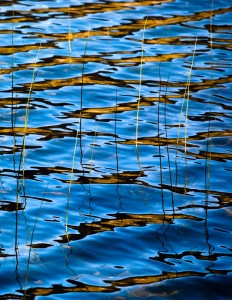 Lake Terrell was once a vast wetland where Native Americans hunted elk, deer and beaver. Today the Washington Department of Fish and Wildlife (WDFW) manages 1,500 acres of what they call the Lake Terrell Unit. Central to the area is the shallow 500-acre man-made Lake Terrell. The lake was created in 1950 by the (then) Department of Game for the purpose of habitat restoration and public recreation. Tiny islands installed in the lake attract nesting waterfowl.

Paddlers should bring binoculars because Lake Terrell attracts a diverse population of local and migrating birds. Canada geese enjoy the adjacent fields as brooding areas for their goslings. Trumpeter and tundra swans often use the lake as a winter resting spot.

Kayaking Lake Terrell isn’t especially exciting unless you’re out there in hunting season (very bad idea). But if you’re looking for an easy freshwater excursion with nice photo opportunities, Lake Terrell is a good option. My husband and I used the lake to introduce kayaking to our kids. I remember our 8-year-old floating in the peat bog at the south end of the lake, dipping her paddle into a carpet of green water lilies.

Take the I-5 Exit 260 to Lummi Island/Slater Road. Drive west on Slater Road for 6 miles to the flashing red light (Lake Terrell Road). Turn right on Lake Terrell Road for about 3 miles. The road ends at the wildlife area headquarters where you’ll find parking and a dock.

Dawn Groves is a writer who lives in Bellingham, teaches WordPress at Whatcom Community College, and finds peace in paddling the Salish Sea. www.dawngroves.com