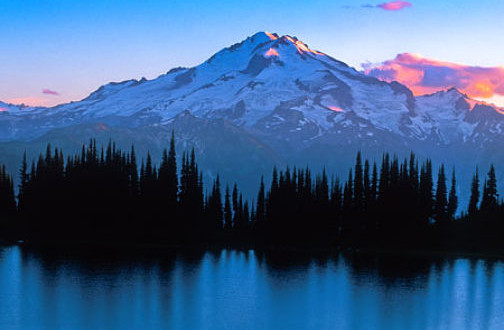 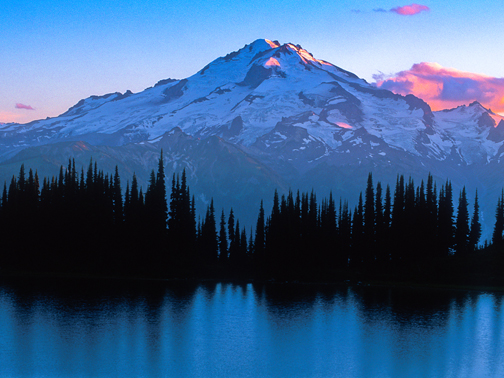 photos by or courtesy of John D’Onofrio ||

Ah, wilderness! The open country, uncrossed by roads. The silence, unbroken by the clamor of machines. Here in the Great Northwest, wilderness is a cherished concept, a chance to refresh our souls and recharge our psychic batteries.

But what is wilderness exactly? And what is our place in it? Philosophical questions—but also legal ones, as the Forest Service managers of the 573,000-acre Glacier Peak Wilderness, which includes areas within Skagit, Snohomish and Chelan counties, have become painfully aware. They currently find themselves embroiled in not one, but two lawsuits: the first to force the removal of the lookout cabin perched atop Green Mountain, the second to halt repair efforts to the Suiattle River Road, the primary access to the west side of the wilderness.

Complex issues? To be sure.
Heated arguments on both sides? Absolutely.
Solutions? As yet, not so much.

On Top of Green Mountain
The trail up Green Mountain has been a favorite hiking route for decades. It ascends through sub-alpine forest and climbs up beautiful meadows to the top of Green Mountain, 6,500 feet, where a fire lookout cabin has (mostly) stood since 1933. The views of the surrounding country are magnificent: mountains rising on all sides, culminating in the awe-inspiring glacier-covered dome of Glacier Peak, at 10,541 feet, Washington’s fourth highest mountain. 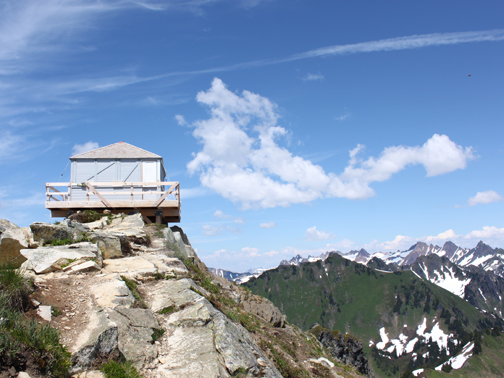 Located on the western edge of the Glacier Peak Wilderness, the Green Mountain lookout was built at the heyday of lookout construction. The structure, like many others in the North Cascades, housed someone who watched for forest fires. But with that duty long ago relegated to airplanes, the lookout, as with others, has faced transition.

Many regional lookouts have been lost over the years to the elements, gone forever. A select few, like the ones at Park Butte, Winchester Mountain and Hidden Lake Peak, have been preserved and refurbished for overnight use by hikers and climbers through cooperative efforts by the Forest Service and volunteer groups. Fewer yet are still staffed by Forest Service backcountry rangers as a means to manage the fragile wilderness that surrounds them.

For its part, the Green Mountain lookout was used for fire detection until the mid-80s. At about the same time (1984), the Washington Wilderness Act was signed, which prohibited structures and use of motorized vehicles and mechanized equipment. Yet, in a distinct exception to the Act, the Forest Service was directed to allow continued maintenance of the various lookouts, including Green Mountain, already situated in the wilderness areas, thus allowing it to be staffed by rangers who could respond to increasing wilderness recreational usage.

In 1987 the lookout was added to the National Register of Historic Places, and in 1990 a Memorandum of Understanding was signed with the Friends of Green Mountain for “preservation and maintenance” of the lookout. That same year the Mt. Baker-Snoqualmie Forest Plan was enacted and included maintenance of the lookouts in a special wilderness allocation that “accepts the nonconforming use” of the Washington Wilderness Act.
Over the years, repairs, necessitated by the furies of winter, were extensive. A catwalk was added, a new roof installed. The rocks that provided the structure’s foundation shifted over time and the building was jacked up and shimmed. A helicopter and motorized rock drill were permitted. 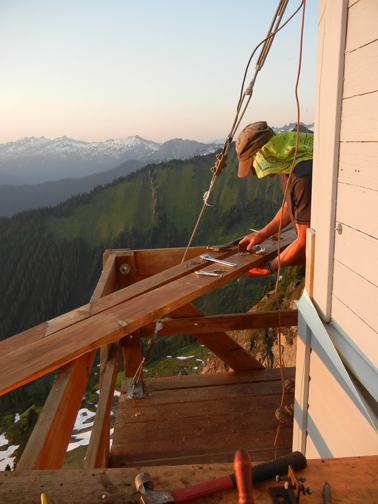 During the winter of 2001-2002 it snowed and snowed. The cabin’s foundation was damaged by the weight and, after consulting with the Washington State Historic Preservation Officer, the lookout was disassembled. The pieces were numbered and removed by helicopter and finally, in August 2009, after countless hours by volunteers and a Washington State Recreation and Conservation grant for $50,000, the repaired lookout was returned in pieces to Green Mountain and rebuilt.

Enter Wilderness Watch. Based in Missoula, Montana, the organization was founded in 1989 and has advocated for removal of lookouts in other areas, as well as such controversial initiatives as the removal of the cable system on Yosemite’s Half Dome, in place since 1919 to assist visitors in climbing the iconic monolith.

The crux of the issue for Wilderness Watch is that the lookout—by virtue of being removed, repaired, reassembled and returned to Green Mountain—represents “new” construction in the wilderness area, something expressly prohibited under the tenants of the Washington Wilderness Act. In a statement, Wilderness Watch Executive Director George Nickas says, “By building this new structure on Green Mountain and using helicopters to transport materials and workers to the site, the Forest Service’s actions have violated these fundamental tenets of wilderness law.

“It is because of these violations of law and the need to restore the wilderness character of the Glacier Peak Wilderness that Wilderness Watch has taken the Forest Service to court.”

Leah Tyson, president of the historical society in Darrington—western gateway to Glacier Peak Wilderness—wonders what’s behind the lawsuit. The cost of defending itself, she asserts, will negatively impact the Forest Service’s ability to manage the wilderness, diverting resources “from the mountains to the courtroom,” and thus will actually result in less protection for the wilderness area. Less money means less wilderness rangers, for example, with a corresponding decline in protection of natural resources.

Both sides have presented their cases to the judge and, according to Glacier Peak District Ranger Peter Forbes, “A decision is expected at any time.” Until then, the fate of the Green Mountain Lookout is—you should pardon the expression—up in the air.

The Long and Winding Road
But the lookout isn’t the only problem facing the Glacier Peak Ranger District:  a battle over the Suiattle River Road has also found its way into the courts.

The 23-mile-long road, which provides the primary access to the western side of the Glacier Peak Wilderness, has been a problem child for the district for many years. The road, originally built by miners in the early 1900s, saw heavy use by logging operations throughout the 50s and 60s. For years the road has suffered serious damage due to flooding, culminating in major wash-outs in 2003, 2006 and 2007 and the road’s closure for more than seven years (ironically, one of the many trails that the road’s closure has made inaccessible is the trail to the Green Mountain lookout).

Plans to finally repair the road were jeopardized when a suit to scuttle work was filed in April, 2011, by the Pilchuck Audubon Society, the North Cascades Conservation Council, and hiker Bill Lider. The bone of contention is what’s known as a categorical exclusion (CE); the Forest Service requested a CE from environmental analysis prior to the latest repair effort, and the litigants claim that a full Environmental Assessment (EA) should be conducted. As a result of the pending litigation, $1.7 million in federal emergency highway funds has been withdrawn, putting the future of the road in question.

Among many other interested individuals and organizations, Jonathan Guzzo, Advocacy Director for the Washington Trails Association, has been following developments in the case with keen interest: “The importance of the Suiattle as a western route into the Glacier Peak Wilderness has led us to advocate for reopening, especially in light of the loss of the White Chuck Road [also closed by flooding]—the only other western access.” Guzzo adds, “Some roads, even ones that are valuable to hikers, should not be rebuilt. The cost of rebuilding compared to the likelihood of future washouts, the availability of reliable reroutes, and the potential damage to the environment all play into our decision-making.”

Guzzo further points out: “Keep in mind that the Suiattle Road was the subject of a 2006 Environmental Assessment, an Access and Travel Management Plan (as yet unfinished) and analysis by the Forest Service and Federal Highways to justify the CE request. The 2006 EA did not cover damage that occurred in 2007 … so in that sense, the EA was not complete. That said, a huge amount of time from biologists, road engineers and cultural resources specialists has been poured into the Suiattle.”

The conflict largely boils down to a long-running philosophical debate on the nature of wilderness (although the road itself is outside the wilderness boundary)—the old preservation vs. recreation argument. On the one hand, strict preservationists advocate for protection of wilderness with little regard for recreational use. In its purest form, this might mean lands that are completely off-limits to us two-legged animals. The counter argument goes like this: When people experience wilderness they become advocates for —and protectors of—wilderness. Thus by providing access to the wilderness, preservation is actually enhanced by the creation of an ever-growing group of citizens committed to preserving it.

“Hikers are an incredibly important constituency for wilderness,” Guzzo maintains. “Reverence for the natural world, a rekindling of the capacity for wonder, and unfettered pleasure of traveling for days—or even a day—in wild country all lead hikers to advocate for the preservation of wildlands.”

And the wilderness areas of the Mt. Baker-Snoqualmie National Forest, of which the Glacier Peak Wilderness is a part, are seeing more visitors all the time. A Visitor Use Monitoring study in 2005 counted 342,000; in 2010 it was 352,000. Yet, as Guzzo laments, “There is a whole generation of new hikers … who have never experienced the beauty of the Suiattle and the trails that it accesses.”

Over the years I’ve been fortunate enough to visit both the Green Mountain lookout and to hike the long and beautiful trail from the end of the Suiattle River Road up along the river to the wonderlands of Miner’s Ridge and Suiattle Pass. The country on the west side of Glacier Peak exhausts superlatives.

Will there be a Green Mountain lookout to visit in the future? Will hikers again climb the interminable switchbacks leading from the Suiattle River to Image Lake? Only time will tell.

Comments regarding both the Green Mountain Lookout and the Suiattle River Road can be directed to:
Darrington Ranger District
1405 Emens Ave., North, Darrington, WA 98241
or 360-436-1155

John D’Onofrio is a regular contributor to Adventures NW magazine; he lives in Bellingham, WA, and readers may connect with him by way of www.jdonofrio.com