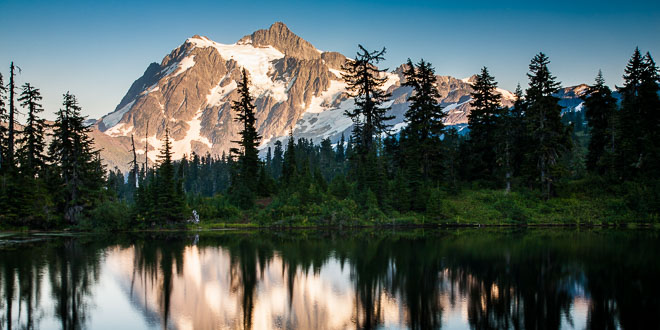 Redemption on Mt. Shuksan: Lessons Learned on the Northwest Rib

In 2017, I experienced a failure that I did not expect.

I have been working as a mountain guide for the last twenty years. I’ve guided throughout the Western United States and have also spent time working in both Alaska and in South America. I was an American Mountain Guides Association Certified Rock Guide, a guide trainer at the American Alpine Institute, and a Rope Rescue Technician. I felt very accomplished…

The American Mountain Guides Association (AMGA) is an organization that oversees guide training and certification on a national level. Certification is expensive, stressful and voluntary. Guides are not required to be certified to work on public lands. However, I have worked in the industry for a long time and it seemed like more and more people were getting certified in the disciplines in which they work. I didn’t think I would be leaving this career path, so I decided that it would make sense to go out and test for my Alpine Certification.

The exam takes nine days. And the days are long. The idea is that candidates are supposed to guide high-end Grade IV and Grade V alpine routes, day-after-day. In the alpine discipline, they should lead 5.10 and WI 4+. Common exam routes include the North Ridge of Mt. Baker, the North Face of Mt. Shuksan, the Torment-Forbidden Traverse, and the Northwest Face of Forbidden Peak—all in late season conditions. It’s a physically demanding and stressful series of days.

After I completed the exam, I was informed that I did not pass.

I was told that I specifically needed to work on the management of loose and/or bad rock. I needed to get better at moving safely and efficiently with guests over moderate terrain littered with loose and sketchy rock. In other words, I was told to go home and train more.

I had taken several AMGA classes to prep for the exam, but they clearly weren’t enough. Instead, I would have to hire one of the AMGA Instructor Team members to give me feedback in this kind of terrain. I ended up hiring Geoff Unger, an AMGA instructor and friend.

Geoff suggested that the best route for this kind of training was right here in our backyard. He suggested that I mock guide Mt. Shuksan’s Northwest Rib.

There are a few extremely popular routes on Mt. Shuksan. The Sulphide Glacier, the Fisher Chimneys, and the North Face are all commonly climbed, and regularly guided. The Northwest Rib is nearly unknown, and rarely climbed. That said, it is linked to one of the most striking features on the mountain. The Northwest Rib frames the Hanging Glacier on its right side. Indeed, one could easily climb the lower part of the route to access the Hanging Glacier above the ice cliff.

Geoff, Will Gordon (another AAI guide), and I set out to climb the mountain on a smoky morning in August. We parked at Austin Pass and made our way toward Mt. Shuksan on the Lake Ann trail. Midway through the day, we began climbing up the Fisher Chimneys on the south side of the Shuksan Arm.

Fisher Chimneys is a worthy objective in and of itself. The route climbs up a not-always-obvious series of gullies. The climbing is mostly third and fourth-class, with a fifth-class move thrown in here or there. This type of climbing is what alpine guiding is all about.

Guides use a technique called short-roping to provide security in third, fourth and low fifth-class terrain. They don’t pitch it out. Instead, they use a combination of techniques, sometimes moving together, sometimes running up short twenty to forty-foot pitches, and then providing an improvised belay off of a boulder or a tree, or even the guide’s own body.

Short-roping one person effectively while moving through the terrain at the same speed as a recreational party is hard. Short-roping two people effectively is even harder.

On that smoke-choked day in August, I felt great. I quickly and efficiently short-roped the entirety of the Fisher Chimneys route, moving just as fast as one recreational party, and passing another. When we arrived at our bivy at the top of the Chimneys above the White Salmon Glacier, Geoff was impressed.

“You’ve been training,” he smiled.

Geoff’s comment was a morale boost. I had been training all summer, but I had thought I was doing okay before. This confirmed that I was on the right track.

Early the next morning, our tiny team made its way down the rock-solid ice of the White Salmon Glacier to the base of the Northwest Rib. As we approached, I could see that it would be an interesting start. The whole bottom quarter of the route appeared to be a mix of loose rocks stacked on top of each other, in between sections of slick heather.

I pulled the team in at the base of the route and quickly transitioned from glacier travel mode to short-rope mode. From there, I began to make my way up the rib in short steps. I’d climb up a section, avoiding loose rock and ice-slick heather to a stance where I could safely implement an improvised belay. I’d bring Geoff and Will up, ensure that they were secure and then go again.

As I made my way up the line, something happened. Slowly, but surly, the nature of the route changed. There was still loose rock, but a lot less of it. And indeed, every now and again, a perfect splitter crack would appear. The climbing went from loose to fun!

The route is approximately 1300-feet long from base to where it tops out on the Upper Curtis Glacier. It could easily be broken into three discrete sections. The first section is composed of loose gully and heather climbing, the second section provides decent climbing on slabs and then the ridge, and then the final section moves up easier terrain through a “choss apron” to the top of the route.

After several hours, we found ourselves looking down at the Curtis Glacier. “If you keep this up,” Geoff said. “You’ll do fine on your exam…”

We did a lot of interesting things on the exam. But when I look back on the summer of 2018, the coolest thing I climbed was definitely the Northwest Buttress of Mt. Shuksan…