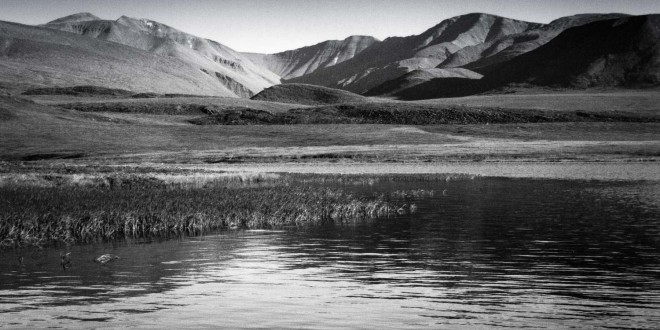 Reflections on Wilderness: A Sojourn in the Brooks Range

It all started simply enough.

Rand’s son Darby was graduating from Williams College in 1997, and his dad asked him what he wanted as a graduation present. The answer too was simple: “A trip.” 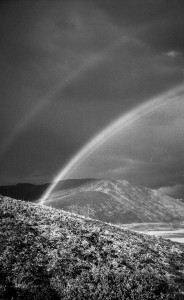 Next question: where? In his Introduction to the second edition of Alaska Wilderness: Exploring the Central Brooks Range, George Marshall provided the answer. “The greatest remaining wilderness in North America, and perhaps the world, is the Brooks Range.”

To avoid getting lost, we decided to follow river drainages. Whether hiking up the south slope of the Brooks Range or paddling down its North Slope, river systems would be our guide.

Darby and Rand asked long-time friends Bob Keller and Pat Karlberg to join the adventure. They in turn invited Norm Winn and Rick Munsen. Now we were six.

To rendezvous with our bush pilot, we flew into the tiny hamlet of Bettles, Alaska—35 miles north of the Artic Circle, population 12 (2010 Census). We found the pilot tying rigid canoes to the pontoons of his Beaver aircraft. He commented that these were not for us, and then added, “It’s now illegal to tie anything to your pontoons. Unsafe!” A reminder, if we needed one, that we were now in Alaska.

As we loaded our gear into the Beaver, two things were notable. First, we packed no gun. We were going into a vast wilderness, a wilderness not because someone had designated it a wilderness, but a wilderness by its very nature. We wanted to experience the wilderness on its own terms. 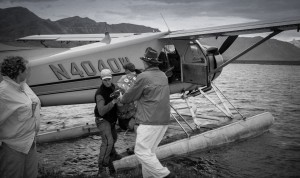 Second, we brought 12 cylindrical food canisters designed to deny even barren ground grizzly bears purchase by tooth or claw. Even in a wilderness—perhaps especially in a wilderness—all creatures protect their food.

Dropped at a tiny lake beside the upper Noatak River, we were now on our own. Our only contact with the outside world would be a critical meeting with a resupply Beaver bringing food and inflatable canoes to a pond near the upper Nigu River.

For the next eight days we would follow the Alatna River north toward Imaturok Pass and the North Slope. Each day held its own surprises, beauty, discoveries, and challenges.

Day 3:  Sunshine broken by short downpours. We headed up an unnamed creek that we hoped would lead us to the Alatna River, our route to the crest of the Brooks Range. A silver wolf, etched by the sun on a verdant backdrop, traversed the hillside next to us. As we approached our first campsite on the Alatna, an enormous, shaggy grizzly crossed slowly, ever so slowly, in front of us. Grey jays and a golden eagle flew overhead. 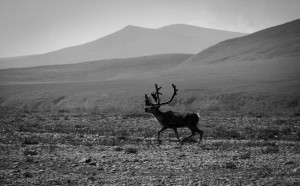 Day 5:  We could now read the terrain well enough to avoid the most perilous footing created by interspersed basketball-sized hummocks and ankle-deep puddles that often carpeted the valley floor. Rand sleepily arose to answer nature’s call around midnight, and was struck with a sense of being watched. Looking around, he saw the Alatna Valley flooded with caribou. A quick shout and the entire party was awakened to gaze in amazement at one of the greatest wildlife spectacles in nature. For two hours, a broad river of caribou poured into the valley across a nearby ridge. Animals kept coming and coming by the thousands, a mystical vision in the light of an early Arctic morning.

Day 8:  Yesterday we left the Alatna, crossed the continental divide, and entered Imaturok Pass, a huge plateau filled with lakes and surrounded by peaks. Now in the Nigu drainage on the North Slope, we walked a high ridge rather than the valley floor. The valley below became an emerald concourse rising to peaks and bisected by a meandering blue stream, the Nigu River. We saw caribou all day. We almost tripped over a grizzly sprawled in the sun like a bearskin rug. Next in our path was an Arctic Fox den. Four kits, clad in their dark summer coats, paused from their play to bark at us. They threw a stick in the air and pounced on it. One ran with the stick, and the others gave chase or waited in ambush, practicing skills needed to make a living in the Artic winter. 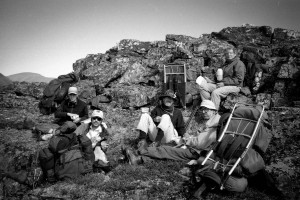 Day 10:  We camped at a lake believed to be our rendezvous site for food resupply and inflatable canoes. To dine on blueberries from five-inch high bushes, we laid flat on the ground, hoping no bear had a prior claim there. From here, the Nigu was deep enough to float our boats. Several of us hiked upstream and found two moose, three Dall sheep, and ground squirrels galore. A yellow-billed loon visited camp. At eight that evening, a Flying Beaver also visited our camp, and we were resupplied, nautical, and once again utterly on our own.

Day 12:  A giant male moose walked through camp at 5 a.m. Pulling the boats onto a gravel bar, Darby spotted a bear cub across the stream. Not knowing where mom was, we were edgy, a mystery quickly solved when her big, round face popped up from behind a nearby berm. Sunlight from behind set her back-lit fur aglow. We departed in haste.

After lunch we sighted another grizzly downriver on a tiny island that split the Nigu into two narrow channels. Six-foot vertical walls cut into tundra confined our boats on either side, and the river was too swift for us to stop. We yelled, waved our paddles and blew our bear horns. When the bear finally took notice, it plunged into the river, swam to the bank, heaved its forepaws to the top of the vertical wall, and lifted its massive dripping body straight up and out of the river. 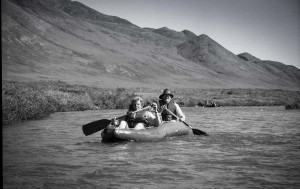 Day 14: Ducklings, jaegers, Arctic terns, a gyrfalcon. A dead caribou in the stream; live caribou on the skyline. At lunch we watched a grizzly and two ravens eating carrion on the far hillside. After a dinner of fresh grayling chowder, came four more hours of exploring—an advantage afforded by the long hours of daylight in the Arctic summer. We camped near a large bluff where the Nigu joins the Etivluk River.

Day 18. Pat woke to find the Etivluk roaring fast and muddy with debris. Marker sticks told us it was rising four inches an hour. A couple of days earlier we had noticed storm clouds back in the mountains, but anticipated nothing like this. We hurriedly moved the  tents higher on the gravel bar. By noon the river had formed a backwater lagoon between the valley terrace and us. We were now on an island.

All agreed that heading into the floodwater was too dangerous, so we scouted escape routes across the backwater lagoon onto the terrace where we spotted a female grizzly and her yearling. The Etivluk crested at 3:40 p.m. We spent the evening watching the river recede, allowing a short paddle to the Colville River. 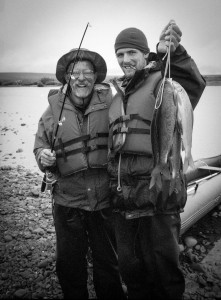 Day 20 – 21:  The bush pilot had described our pick-up point on the Colville: “Look for a run of deep water after the bend and blocks of coal on the beach across the river from a bluff with big birds on it.” Earlier he had warned that if we failed to appear on time, he would leave and not return. We got there a day early, although by now the days had begun to blend together.

There it was: A bend in the river, deep water, coal on the beach, a golden eagle nest on the bluff to the east and a peregrine falcon nest to the west. On the evening of our arrival, a fledging eaglet successfully took its first flight. The next morning, a sibling tried to duplicate the feat, but crashed into the Colville River. It did a feathered breaststroke to a nearby rock and spent the day drying in the sun with wings spread. This seemed enough to deter the third eaglet, at least as long as we watched. At the other end of the bluff, the peregrine parents busily rotated feeding four raucous and ravenous eyases. Taking from what seemed to be an endless supply of fat ground squirrels from the top of the bluff, the parents alternated bringing back to the nest a front half and then a bottom half of a kill. Squabbling as though the youngsters had not eaten for a week met each new arrival.

At 6 p.m., we heard the faint drone of a Beaver. Soon, after meeting 14 barren ground grizzlies, 250 miles of hiking and paddling, and the adventure of a lifetime, we left behind this land with no trails, no campgrounds, no maps, no turning back—a true wilderness.

A Remembrance by Rand Jack 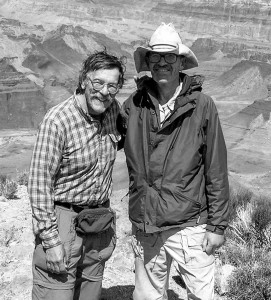 When Bob Keller died on February 26, 2017, our community lost a remarkable person. He engaged the natural and human world with equal fervor. Though a steadfast individualist, Bob engendered community at every turn. A scholar and teacher, he taught by words and actions, inspiring generations of students and friends.

A few examples: When the president of Olympic College in Bremerton ordered Bob to quit protesting the Vietnam war, Bob immediately put a protest sign in his office window. Bob was fired; sued the college; was reinstated and then quit. He lived his principles.

As a Whatcom Land Trust board member for almost 20 years, Bob twice assembled diverse teams of 75 people to create the iconic books, Whatcom Places I and II. He engaged the community.

Bob taught classes at Western Washington University that ranged far and wide from Death and Dying to The Reader’s Digest to The Forests of the Pacific Northwest. He challenged students to think in ways they never imagined. One Keller class project became a statewide returnable bottle initiative that was only defeated by millions of dollars in industry money. He was a dedicated educator.

When he planned to build a retirement study/library onto his home, he canvassed his neighbors to make sure the addition would not bother anyone. He respected others.

He hiked over the Brooks Range, climbed the Cascades, walked the Grand Canyon rim to rim in one day, and paddled the Queen Charlottes and west coast of Vancouver Island. He embraced adventure.

He and his wife Pat have preserved forever the wildness of their property on the Cascade River. He was a committed conservationist.

Some traditions say that a person is not really dead until their name is no longer mentioned. Bob Keller deeply touched so many people that his name will not receive final mention for a long, long time. 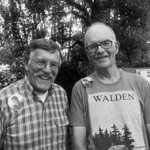 Together, Rand Jack and Bob Keller have hiked to the crest of the Brooks Range, climbed to the top of Mt. Baker and walked to the floor of the Grand Canyon. They paddled together in Alaska, in the Queen Charlotte Islands and up and down the west coast of Vancouver Island where they conferred with puffins and enjoyed the freshest halibut and salmon known to man.