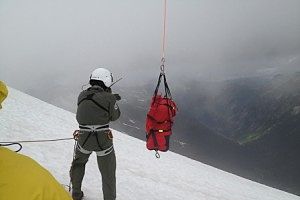 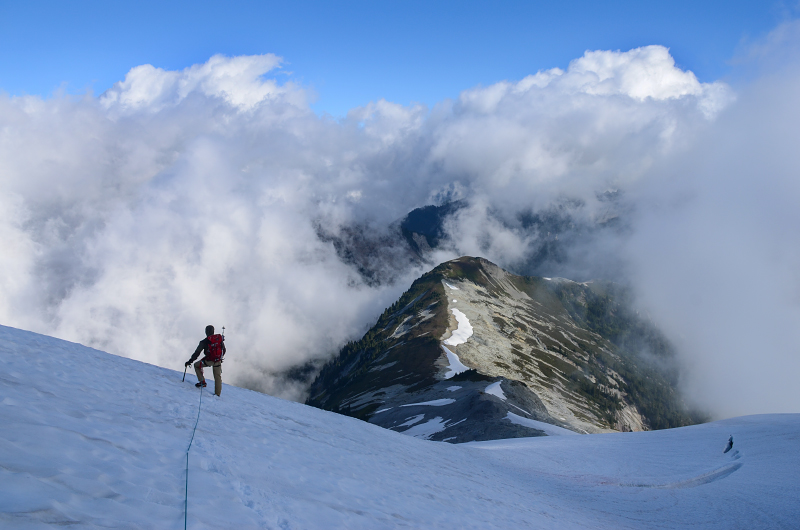 The feeling of something wet streaming down from my head. Cold all around me. Bleak, indistinguishable forms starting to move near me. Consciousness starting to wake me.

Where was I? You hear about people falling into crevasses, but I never thought I’d experience one firsthand.

It was September 8th. The sun was out and the trailhead was packed, a typical late-summer Saturday in the North Cascades. I hiked along the beautifully open Hannegan Pass trail with my two friends, Anthony and Keith. Our goal was to climb , a 7,115-foot glaciated peak most-often viewed from Hannegan Peak and usually climbed in a day. We weren’t in a rush and went up mid-afternoon with the plan to camp overnight and summit the following day.

After passing the sign to Boundary Camp, we started up the last leg of what could scarcely be called a trail, which leads to the 5,600-foot saddle where we’d make base camp. Hanging onto exposed roots while trying not to slip on loose rock and other fragments of earth is a typical experience on this part of the “trail”.

With blisters in tow I made it up to the saddle. After traversing through piles of shale and some snowfields we turned the corner and the glacier-covered summit came into view above us, gleaming in the glow of the late afternoon light.

After setting up camp and cooking up some delicious freeze dried dinner (I love those things) we went over the game plan for the next day. Chill music played in the background as the sun set; all in all, a pretty good day. I think the best feeling at the end of long day is collapsing into your sleeping bag, excited for what’s to come.

5 AM came much faster than my sleepy body wanted. The hot and sunny weather from the previous day had given way to cold and fog. After eating and getting everything together we headed out for the summit.

We walked a little ways up the rocky spine on the north face and then roped up. The crunch of snow under our crampons broke the silence of an otherwise still morning. As the fog grew thicker, route-finding became challenging and we paused at an arête to get our bearings. A handy map printed out from summitpost.org helped put us back on the route again.

After taking our time in the opaque fog we made it to the summit, confirmed by a U.S. Geological Survey marker on a rock, around 7:45. At this point the dense fog was being driven in and out by an easterly wind.

We stayed up there a couple more hours hoping to get a view of everything – or anything. After being teased with glimpses of Mount Shuksan, the Nooksack Glacier and other tantalizing sights, we decided to call it a day and descend back to camp.

As I watched the roiling clouds roll in and out on our descent, I was nothing less than humbled taking it all in. We detoured slightly to a crevasse we had spotted on the way up thinking it would be a great spot to do some crevasse rescue training. Anthony pounded in a snow picket and hooked me up to it. Anthony and Keith hooked up to the picket as fail-safes. I stepped over the edge, camera around my neck and was about three to four feet into the thirty foot crevasse when things went black.

When I awoke at the bottom I found my lens had shattered off the camera, taking the mount with it. Blood was flowing and starting to freeze from a laceration above my eye. With my first step I realized my ankle was seriously injured and I wasn’t about to climb out. My partners were down in the crevasse with me and Anthony, who figured he had a broken collar bone, walked toward a shorter part of the crevasse to search for a way out. Keith and I slowly and painfully made our way over to Anthony, about 20 to 30 feet from where we fell. Keith was positive he had broken ribs. With adrenaline pumping Anthony was able to shimmy out of the crevasse using his crampons and back against the ice in a spot that was maybe six feet from the surface.

Anthony used his cell phone to call 911 and reach Search and Rescue. I clearly wasn’t going anywhere and judging from the moans of my friend Keith, he wasn’t either. After about two and half hours, three climbers coming down from the summit stopped to help us. They quickly hooked up a deadman’s t-slot and got us out of the crevasse one by one.

Search and Rescue took awhile to get to us due to the inclement weather. After a clearing in the weather opened up, a helicopter swooped in. Due to the slope we were on, the helicopter couldn’t land but was able to do a neat stunt where the pilot touched down the front part of the skids on the snow, leaving the back in mid-air as a Search and Rescue man hopped out onto the snow. They flew out and came back a short time later with a litter for Keith and I. They flew down and dropped us off on a flatter part of the saddle. Airlift Northwest, the hospital helicopter, flew by several times and finally managed to find a spot to land. They took me out first with Keith following and Anthony last.

This whole time I was not so concerned about my fractured ankle or the blood flowing down my face but that fact that I wasn’t able to document all this with my broken camera. Weird, eh?

At the hospital, doctors told me I had dislocated and fractured my ankle (which would require a steel plate being put in).  I also had a concussion, a gnarly laceration above my eye which required 20 stitches and some other minor injuries. Keith had seven broken ribs, fluid in his lungs, a collapsed lung and would remain in the ICU for two days. Anthony’s main injury was a broken collar bone. He came by to visit me later that night.

Well from what my friends told me the picket failed and failed fast, before anybody had a chance to arrest my fall.

I’d like to thank the three climbers that pulled us out: Alan Kearney, Gil Laas and Aaron Miller, as well as Search and Rescue for doing a great job, Airlift Northwest and all the volunteers at Mountain Rescue.

Has this in anyway turned me off to climbing? Not in the least. Do I blame God? No. With every venture there is risk and reward. Accidents happen and I bear no ill will toward the mountain or God or anybody else for this incident. I’m simply grateful to be alive and can’t wait to get out there again next summer.