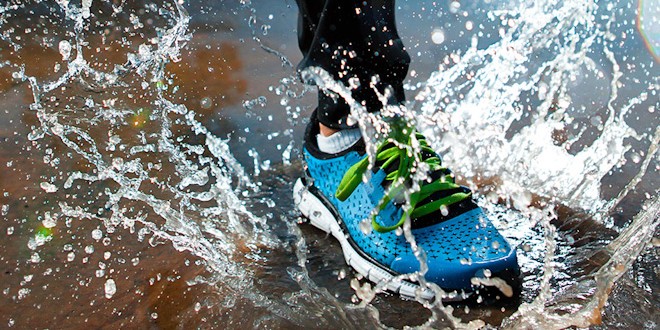 Running in the Rain

If you live in the Northwest, especially on the west side of the Cascade Mountains, you get used to rain. When I was a teenager, I used to love strolling the mile between my house and my best friend’s house when it was pouring outside. There was something so gloriously messy about walking unconcerned through puddles and arriving at her door freezing and soaking wet. I would borrow and put on her dry sweats while she made me something warm to drink, and we would spend the afternoons discussing the deep, existential questions teenage girls talk about – and boys.

Probably because I grew up in the rain, I never minded it much once I became a runner. I mean, I didn’t necessarily itch to get out in it, but if I planned a run at 9am and the rain was coming down, I still stepped out the door. Doing so made me feel hearty and proud of myself.

Then three years ago I got it in my head to run the Chuckanut 50K. This race takes place in March, which as we all know is a wet month in Western Washington. In the preceding cold months, I trained by covering every part of the course at some point during all kinds of nasty weather, just so I would be as ready as I could be.

On the frigid morning of the race, the sky promised an all-day soaking. While I stood around at the starting line getting drenched, along with everyone else, a fleeting inclination to go home flitted through my mind, but I pushed it away. I overheard the man standing next to me, however, say to his companion, “The minute it starts snowing, I’m calling it quits.”

We did get snow that day. By the time I got to the long hill that winds up Cleator Road there was a thin icy pack of it on the ground with more white coming down. And the wind was cold… bitterly cold!! There were even a few minutes of hail at some point during my nine hours on the course. But mostly there was rain – insistent, relentless rain. Always a pokey runner who expects to be at the back of the pack, I was nevertheless surprised at how slowly the miles ticked away for me that day. The mud along the Lost Lake Trail alone took me more than an hour to get through. By the time I crossed the finish line in Fairhaven Park (I was dead last, just FYI), I was covered in thick, dark mud, soaked to my bones, and frankly confused about what I had just been through.

The next day I stayed in bed all day. While sipping on hot tea, I made myself a secret vow, “Life is too short. I’ll never, ever, ever run in the rain again.”

Two weeks later, on a rare clear day, I attended a track workout with a group of women who naturally wanted to know how my race had gone. Regaling them with the toils of climbing up and then slipping down the final big hill, “chin-scraper,” when it was thick with muck drew groans of sympathy. But when I announced that I was never going to run in the rain again, my friends burst out laughing. “That’s ridiculous! How are you going to pull that off? You’ll never run!”

“I’m telling you, it’s nothing but the treadmill for me if there is one drop of water falling from the sky,” I promised.

And I kept that promise for months. Between the end of March and mid-July that year I watched all five seasons of Big Love while running on my treadmill in my garage.

What a great series! 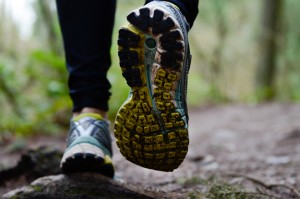 Unfortunately, when you protect yourself from the elements, you also prevent yourself from developing flexibility and dexterity. By the time I started running outside regularly again in August, I hardly remembered how to pick up my legs to get around the ruts and roots on the trails. And I was irritated if the temperature wasn’t exactly 63 degrees. Also, I was bored with my own thoughts; I couldn’t remember what to do with my mind on a long run without a screen in front of me. I had stayed dry, but I’d stopped growing as a runner during those months in my garage.

When October rolled around and the leaves started to turn and the skies became thick with black clouds, I had to make a decision. Go back to my treadmill and find a new series to watch or re-acclimate to the wind and rain? I ambivalently chose the rain—because I knew it was the healthier choice.

The thing is, rain – as with many uncomfortable elements in our lives – gives us something to contend with and, thus, gives us the chance to toughen up, to learn something about what we are made of. Like plodding through difficult conversations with a teenage child or fumbling your way through the first stages of a new job, pushing oneself out the door for a run on a really wet day is the necessary discomfort that leads to something better on the other side.

This morning I woke up to the plunk, plunk of rain on my roof. Last night I’d told myself I would get out for a run before starting on the pile of work I had to do, but as I lay still in the darkness of my bedroom, I thought, “Ah, well, maybe tomorrow morning will be drier.” And then I thought better and climbed out of bed to suit up. If there is one thing I’ve learned since my brief moratorium on running in the rain, it’s that if I suit up for a run (or really for anything in life if you think of “suiting up” as a metaphor for doing the practical things that get a person ready for what she needs or wants to do) and go stand in front of the door, I’ll probably open it and walk out.

So that’s what I did.

Out on the trails through Whatcom Falls Park where I take my daily runs the wind was gentle, hardly disturbing the bare branches of the trees, but the raindrops were huge and swollen. You know the kind. Not the drizzle of an all-day haze, but more like the dripping from a hundred unrelenting leaky faucets in the sky. Like every runner I know, I’ve invested in some good gear, so although I was sopping wet within minutes, I was warm enough, and I ran with a sense of equanimity, already feeling good about myself for making the choice to get out the door.

When I reached the falls, I came to a stop and stood on the bridge to watch to the creek. The falls were gushing hard over the rocks this morning, and I closed my eyes to listen to their grumbling rush. They seemed to speak to me, telling me they were always there whenever I might need a moment of stillness.

I’ve run over that bridge hundreds of times over the last many years, but this morning was the first time I’ve ever stood still and closed my eyes. While I was listening to the rushing water, I remembered the spring of Big Love and thought about how you can’t close your eyes while running on a treadmill.

Life is too short not to run in the rain, really. Whatever elements we face when we step out the door, the experience is always richer than staying safe and dry inside.

Cami Ostman is the author of Second Wind: One Woman’s Midlife Quest to Run Seven Marathons on Seven Continents (Seal Press) and is a longstanding member of the Greater Bellingham Running Club. She is a writing coach, family therapist, and the co-director of the Wind Horse Half Marathon. She lives in Bellingham, Washington.