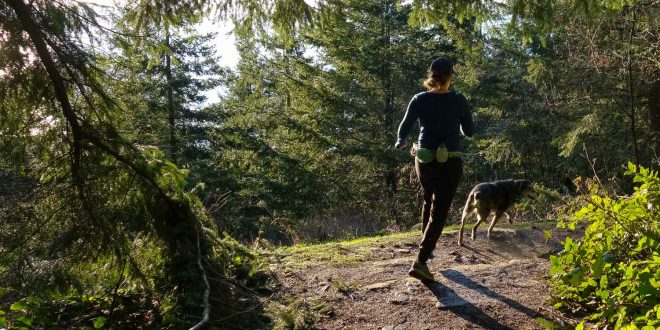 As I age, I have found a love for running up steep hills in the woods. It started because of bad knees and old dogs and continues as a personal challenge…but first let’s talk about the fact that it’s not easy growing older in a college town.

Now those students blow past me on a trail, run daisies around me on the soccer field, and make me feel as if I’m riding a stationary bike on the days I commute car-less. And, truth be told, it’s not just the college students anymore. “Darn you, you whippersnapper!” I say (in my head) and shake my fist (in my head) at someone in their mid-30’s accelerating past me on the Sportsplex field. Their “older” league for women starts at 25. Twenty-five!

The constant in-your-face comparison highlights what I’ve lost. It makes me acutely aware of all the precious weekends in my 20’s and 30’s when I sat hunched over various dining rooms tables grading papers when what I really wanted to be doing was climbing mountains. Later, I kept telling myself…later.

Certainly, there are parts about aging that I appreciate: more financial security, greater confidence and sense of self, the wisdom that comes with experience—some might say these are the consolation prizes for reduced endurance, permanently angry-looking brows and the need to cross your legs when you sneeze. But I’m trying to see it more as an even trade. Now I can afford the e-bike (I call it the cheater bike) for example. Though, yes, the younger salesperson at the bike shop told me, “A lot of older people are buying these,” but, hey, it cuts down on my commute by 15 minutes each way. I also arrive home without jelly legs and still have the juice to go for a run, should I want to. I’ll take it.

I do not have a runner’s body; I never did. Even in college, when playing lacrosse and running on the side to keep in shape, I quickly found there was limit to how many miles I could put in a week and still walk down the stairs in the morning. (About 15, it turns out. Per week, not per run!)  What I had going for me on the field were my short bursts of speed—I could outrun most players and at least keep even with the very fastest player on the other team—but distance is not my game. The stops and starts on the soft grass-and-mud fields, interspersed with jogging around when the play was elsewhere, seemed to work just fine for my knees.

After college, I switched to playing recreational soccer, and for many years continued to enjoy a body able to carry me fleet-footed down the field, though I eventually started wearing knees braces for extra support. Occasionally, I still went for a run, but it was never my main form of exercise. Part of the reason I ran at all is that my endless meandering on the trails with my dogs (I feel it’s my obligation to get them out daily, plus, I love being in the woods) sometimes took a bigger chunk out of my workday than I could spare. I started thinking, “Why walk when I can run?”  So I began doing more of it.

The uneven and soft terrain of trails offers enough variety to keep my knees happy, and—did I mention?—I love being in the woods. But over the years, I’ve had a series of dogs that began to have trouble keeping up as they aged. These dogs, past and present, but presented in no particular order, are: Sweet Dog, Stupid Dog, My Soul’s Twin, Tiny Ancient Dog, Best Dog and The Flying Nun. All have been excellent trail dogs, save for Tiny Ancient Dog, who didn’t run, obviously, and my current Stupid Dog, who, due to many (stupid) incidents, now has to be leashed at all times, even on the off-leash trails.

The solution, it turned out, was hills. Steep ones. Inclines that slowed me down so much, my dogs could just about walk their normal pace and still keep up. The hills allow for a good, sweaty workout without having to go more than a few miles, benefitting the old dogs and freeing up some of my time. And the more I sought out steep terrain, the more I felt accomplished and capable upon reaching the top. Even if I don’t happen to have an aging dog, I’ll still seek out the climb. I may be older; I may be slower; I may not be able to play as much soccer, but this—this is something I can do. I can push myself hard and get somewhere, usually somewhere with a nice breeze and vantage point.

Sometimes when working my way up the Burnout Road or Oyster Dome or whatever climb I’m tackling, I’ll pass by younger hikers coming down, and, admittedly, I relish the impressed look I occasionally see in their eyes. It’s a silly vanity, I know.

What I want to tell those people hiking downhill is that their perception is skewed by the fact that we are heading different directions. Turn around and watch me for 30 seconds, and they’ll see that “running” is a highly glorified term for what I am doing. Think instead of “the slowest jog you’ve even seen.”  If the top of speed-o-meter is Usain Bolt, I’m somewhere down between Betty White and a glacier. I’m pretty sure I could walk faster up the hill. And it’s possible I’m mistaking their pity for admiration. “Look how hard she’s trying!” one may say to the other once I’m out of earshot. “I smiled at her because she looked like she needed it.”

When I’m muscling my way up a hill or bounding down trails and jumping over creeks, I imagine myself looking like the photos that grace this type of magazine —an adventurous, bad-ass athlete capably gliding over the landscape. But that’s a construct of wishful thinking. Because I do not look all millennial glow-y when I exercise. My face gets puffy and fire-engine red, my hair turns into a frizz-bomb and my expression, if the photos by the evil Ski-to-Sea photographer who insists on capturing the X-C skiers as they are going up the hill are any indication, I basically look like the real-life version of Edvard Munch’s The Scream. (Okay, okay – I know that the photographer isn’t actually evil; I know that it’s easier to photograph the skiers when they are spread out on the uphill rather than racing down it. But nobody else’s picture looks like mine. All the other 499 competitors are smiling and cavorting up the hill like they’re in The Sound of Music. Clearly, it’s just me).

A distinction could be made that unlike The Scream’s look of abject terror or agonized despair, my expression more closely resembles a jaw-open version of exhaustion. The thing is, looking back, I wasn’t exhausted at that point in the race. Or any point, really. I’m not skilled enough of a skier to push too hard up the hills because if I push, I just slide backwards. That’s just how I look when working out.

When running, if you throw in the thrift store clothes and the bag of dog poop swinging in my hand, I’m about as far from those magazine pictures as a snaggle-toothed pug is from a wolf. On some outings, people have actually stopped to ask me if I’m okay.

But, whatever – I am doing it. I am pushing my 46 years up that damn hill, and, despite what I might look like, I am enjoying it. I aim to still be doing that at 56, and, if the good world allows, maybe even decades beyond that. I may not be a runner’s runner, but I am moving forward, and I run only for myself. That is the mental place where I can learn to ignore all the comparisons and focus on what I can do, not what I can’t.

To keep myself happy, I never enter races or run with other people. It’s the bliss of solitude that makes the running worthwhile—the freedom from having to keep up with a running partner and the mindless peace of being in the moment with only lightly swaying ferns, bird songs and the rhythmic jingle of my dogs’ tags. No timing, no counting miles, no weekly goals, no reading running magazines or buying weird goo to squirt in my mouth. Forget the faux-Insta-perfect images, jazzed up tales of grit and glory, race tee-shirts and stickers. If that’s a person’s jam, that’s awesome, and I say go for it!  But it’s not mine. The simple act of getting up a hill—step-step-breathe, step-step-breathe—is my bliss.

So what are all these words for?  To remind myself and others that fitness, challenge and a sense of accomplishment can happen at any level, and mostly importantly, it should happen on your terms. Forget what other people can do, whether they are your age or not; find your own stride.

So I will keep running the hill, as long as I can, at whatever pace I can, because I figure as long as I’m going up the hill, I can’t go over it. 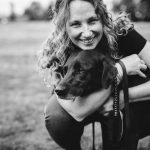 Erika Thorsen is an educator living in the Pacific Northwest.  She enjoys gardening, books, analyzing media, being in the mountains, looking at mountains, and painting pictures of mountains.