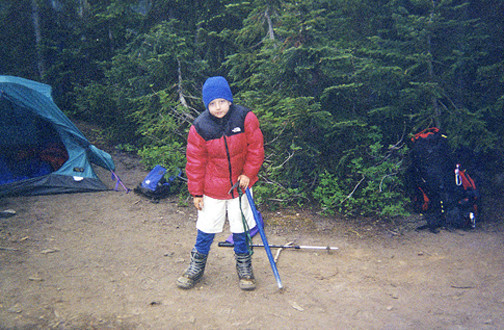 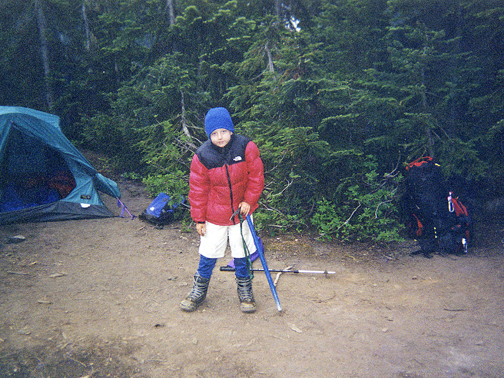 My son, Nathan, just started college last fall, working on a degree in performance music. If music doesn’t pan out for him, though, he has one standup routine that will carry him through a set at the Comedy Club. I’ve heard him rehearse this act a dozen times, telling it with particular relish when standing beside a young lady he’s trying to impress. The title of this routine would have to be, “All the Times my Dad nearly Killed me in the Mountains.”

Normally, I endure this harangue without getting defensive. I just sit back and correct the obvious exaggerations: “the crevasse wasn’t that wide,” or “the rock wasn’t that bad,” or “I never told you to do that.” But one night I found myself wondering, “Where did this kid come up with the loony idea his own father is trying to kill him?” And, when I thought back, I saw only one place—the shoulder of Ruth Mountain, in a whiteout, the summer Nathan turned ten.

Ruth Mountain is a 7,100-foot peak in the North Cascades, bordering its more famous neighbor Mount Shuksan on the northeast. It’s easily accessed from the Hannegan Pass Trail, which from car-to-pass covers four miles and gains two thousand feet. On the north, the mountain is heavily glaciated, but the climb is moderate, never topping 25 degrees and with only one spot that’s mildly dangerous. For all of these reasons—easy approach, good overnight camping, and non-threatening exposure to the elements of Pacific Northwest climbing—Ruth seemed like a great spot to introduce young men to the joys of the North Cascades.

Our team consisted of my buddies Chris and Randy, Randy’s grandson Josh, and, of course Nathan. The kids brought all the requisite essentials along—Gameboys replete with the latest versions of Zelda, Power Ranger backpacks, a few action figures, and books for nighttime reading. They shot off ahead while the rest of us slogged up the trail like draft animals. With clouds shrouding the peaks, the weather was threatening, but we made camp quickly enough and were even left with time to take the ridge run north to Hannegan Peak and tag it that afternoon. Then it was back to camp, where Nathan amused the group by stumbling around wobbly-legged using my spare ice axe as a cane. “Look,” he said, “I’m a really old guy, like my dad.”

The next morning I rolled out of my bag, popped the kinks out of my middle-aged frame like any “really old guy” might, and found Chris and Randy already firing up the camp stove. I shook the boys awake, handed each of them a cup full of oatmeal, and soon after that we were moving, picking our way through heather and fallen logs until we located the climber’s trail just south of the pass. In short order the path led to a clearing, and there our team hesitated. Capped with clouds, the mountain seemed to rear straight up from the earth. Mist toppled in streamers to either side of the thin black streak that marked our route up. Under that kind of weather, I knew every mountain looked like the North Face of the Eiger, but the illusion gave Josh pause. Already he’d been torn from a warm sleeping bag, force-fed gruel, and sent tromping through wet heather. The added prospect of clawing his way up a sheer trail played havoc with his morale.

“You don’t have to go if you don’t want to,” Randy said to his grandson. “If it starts raining, we’ll just be turning around anyway.”

I stood with Nathan off to one side, doing what any responsible parent would do. I offered him a deal. “This is a big mountain for a kid. You make it to the top, I’ll carry your backpack back from camp.”

Making his decision didn’t take Josh long; he nearly broke into a sprint as he and his grandpa turned for the car. Chris, Nathan, and I crossed the clearing and started up the path, which was far less steep than it appeared from below. Soon we topped the bench beside the Ruth Glacier. Ahead of us was snow and clouds the color of… snow—a full-blown whiteout.

I dug into my pack, pulling out our harnesses. “We have to rope up here.”

“We don’t need to rope up on this,” Chris said. “If I had two kids, sure. But since this is the only one I’ve got, we can’t let him do anything too crazy.”

I cinched Nathan’s full-body harness tight at his waist and over his shoulders. “How’s it feel?”

“That’s just how it’s supposed to feel. Show me that self-arrest position again.”

Immediately he took his over-long axe and held it at a diagonal across this body, pick beside his shoulder and adze beside his gritted teeth.

“Perfect. Chris, you want me to lead?”

He grunted while laying the rope out at the glacier’s edge. Chris is an ex-Army Ranger, afraid of nothing except the prospect of my leading a climb, a situation he deems riskier than parachuting solo into a terrorist training camp armed only with a sharpened stick. He tossed us our knots, waited while we clipped in, and then began kicking steps, traversing the steep slope to our right.

Although the fog hid the danger, the glacier’s first hundred yards contained the only serious hazard we would face. I watched as Nathan struggled to punch in his axe, which each time it landed tipped him toward the cliff just below us. For that opening section, we had no run-out and no time to self-arrest if we fell.

Soon, though, the whiteout lifted enough for me to glimpse a level area below. After those first anxious minutes, we finally had a spot we could slide to a stop. I ran up to Nathan to check how he was doing. “I’m OK,” he said, “but I’m kind of scared.”

“The ice axe is a little long. That’s a bit of a problem, but look.” I pointed my axe at the level patch below our traverse. “See down there? Chris and I have you, so you couldn’t fall. But if you were by yourself, you’d just do that great self-arrest again.”

Chris turned a hard right, leading us up the mountain’s northern spine. The whiteout thickened, reducing my partners to two blobs of color, their jackets the only items differentiated from that relentless grey. At one point I caught the team when Chris stopped to show Nathan a narrow crevasse, explaining the crevasse’s hourglass shape and why a person shouldn’t ever walk up to the lip. But most of the trip was a silent trudge through the dark, up and over one false summit after another until we finally came to the highest point, a pile of exposed rock that registered 7,120 feet on my altimeter. 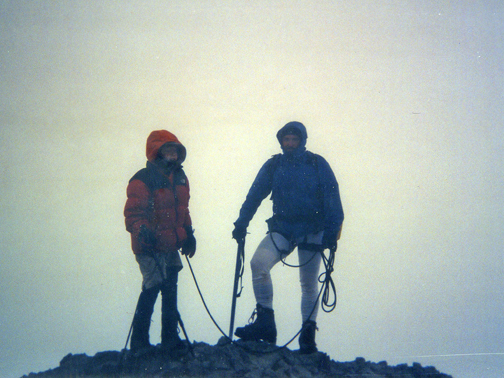 But Nathan didn’t respond. He turned back, hood framing his puzzled face, giving me a “What did we come up here for?” look—utterly bemused and utterly crestfallen. I’ve seen that same look and understood that same question from dozens of people I’ve entertained on Cascades climbs.

At this point, you might find yourself siding with my young lad, wondering what kind of idiot would subject his child to an experience like this. If that’s the side you’re on, you’ll be happy hearing that he got a measure of revenge that very day. Remember the promise I made to get him up that heather trail in the first place? Nathan definitely remembered, and on breaking camp he immediately tossed his backpack, Power Rangers and all, into my arms and took off with Chris, the two of them exchanging stories about their favorite cartoons.

Some men can toss a pack over each shoulder and stride ahead. Some men can, like MacGuyver, rig two packs together so they become one. Unfortunately, I’m not a member of either of those groups. Instead I hoisted Nate’s pack in any way possible, most often staggering ahead in short, forlorn bursts, my palms turned up and the pack across my forearms, looking like a supplicant imploring the pagan gods for salvation. Clearly my own flesh-and-blood had forgotten me. If Saint Randy hadn’t wondered what took me so long and come back to save me, my bleached bones would be resting just off the trail below Hannegan Pass.

So you could say Nathan got his revenge for being led on such a pointless quest for such a grandly disappointing view. Ten years later, though, I got a phone call suggesting the experience may have done the kid some good after all. He called to tell me he had gotten out of class early, taken off on a trail, felt pumped full of a “crazy adrenalin” at being out in the woods again, and had gone 16 miles before realizing he didn’t have food, water, moleskin or bug juice. He ended up registering a 22-mile day on this impromptu adventure.

“Man, that sounds like something I would do,” I said.

Instead of concurring with his worry, I hung up the phone feeling a “Father Knows Best” kind of glow, a realization snapping into place like the clarity that comes when the sun burns off the last wisps of fog. Nathan can tell his stories, believing he’s mocking my decidedly cavalier parenting. But, though he might not know it yet, what he was actually doing was akin to his musical studies. He was rehearsing the blues, a version filled not with the traditional cheating lovers and skinflint bosses, but instead with yawning crevasses, whiteouts, and Northwest drizzle.

And once he understands that, what he’ll see next is that the spirit of the blues doesn’t come just from a catalogue of woes—it springs from the pride we take in overcoming them. Like our trip up Ruth Mountain, any Northwest climb at some point becomes a torture test. Suffering is half the fun, with the joy coming from how we crash through (and occasionally trip over, or fall in) those obstacles the mountain delights in throwing our way. The quality of the view from the summit is overrated. That’s the secret of the mountaineering blues, and what better lesson could there be for a ten-year-old aspiring mountaineer to learn?