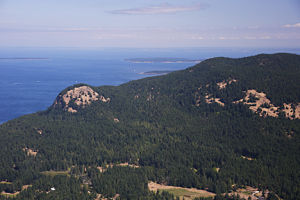 The San Juan Preservation Trust has acquired a property on Orcas Island that will add more than 140 acres to the Turtleback Mountain Preserve and permanently protect the entire ridgeline of the mountain.

The iconic turtle-shaped profile of Turtleback Mountain is recognizable from throughout the San Juan archipelago. It was widely presumed to have been completely preserved in 2006 when – thanks to an outpouring of public support – 1,578 acres of the mountain were saved from development.

The 30-acre “head” of the turtle, which was donated to the San Juan Preservation Trust in 1990, is separated from Turtleback Mountain Preserve by a privately-held 111-acre property. The owners had begun to prepare this larger property for residential development when they learned of the Preservation Trust’s interest. After many months of negotiation, the parties agreed upon a purchase price of $1.0 million.

The San Juan Preservation Trust quickly identified $600,000 towards the purchase price, including $500,000 from its own investment funds and $100,000 from four lead donors. After a summer fundraising feasibility effort yielded additional gifts and pledges from several other generous individuals, the Preservation Trust’s board of trustees unanimously agreed to proceed with the project. With $990,000 now committed, the Preservation Trust continues to fundraise to meet its total project goal of $1.15 million. The $160,000 outstanding balance includes funds needed for the purchase as well as trail building expenses and a small stewardship endowment to care for the property. 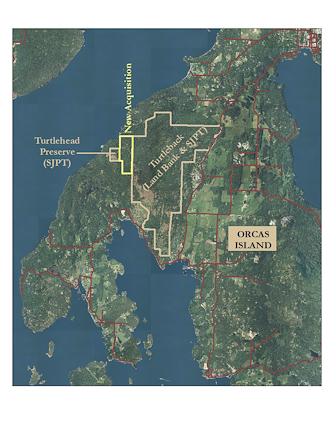 With this acquisition, the Turtleback Mountain Preserve will expand to include both the 111-acre purchased property and the 30-acre turtle’s head, which has stunning 360-degree views of surrounding islands. This addition ensures that the entire Turtleback Mountain ridgeline will remain undeveloped and creates a new day hike to a premier destination that has – until now – been inaccessible to the public.

The Preservation Trust plans to work with the San Juan County Land Bank to merge these three properties into one single preserve, with the same shared ownership arrangement that has already been established on the Turtleback Mountain Preserve. In the meantime, this partnership has already engaged the Washington Trails Association, and over the next several months these three groups will work together to design and build a public trail that will connect the Turtleback Mountain Preserve with the spectacular views provided from the summit of Turtlehead.