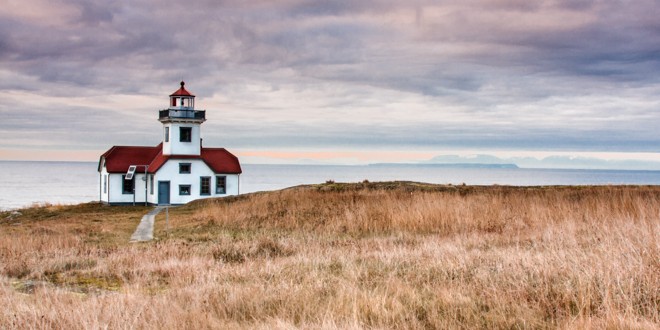 Mention hiking on the San Juan Islands and Moran State Park instantly comes to mind. While this large popular park on Orcas Island with its 30 miles of trails certainly is a supreme hiking destination, there are scores of great hiking spots throughout Washington’s stunning archipelago.

The outer islands, beloved by boaters, paddlers and sailors also contain some exceptional hikes. In fact, some of the most stunning trails within this island chain can be found on the three main outer islands; Patos, Sucia, and Matia.

All three of these islands are protected as public lands. And all three offer excellent hiking as well as exceptional camping and opportunities to observe wildlife. The geology of these islands with their sandstone composition resembles that of British Columbia’s Gulf Islands. They are younger islands than the ones farther south. There is no ferry service to them. You’ll need your own boat or you can hire a water taxi service from East Sound, Anacortes, or Bellingham.

Situated on Boundary Pass, Patos Island is the northernmost of the San Juans.  A unit of the San Juan Islands National Monument (established in 2013 by President Obama); the 207-acre island is managed by Washington State Parks. Spanish for ducks, the patos observed here by early explorers were probably alcids—auks, guillemots, and murrelets.  From Active Cove you can follow a couple of trails for a 2.2 mile loop. Hike along sandstone-shelved shorelines, through old-growth forests harboring some giants, and to the beautiful lighthouse at Alden Point, built in 1908. Here savor sweeping views of Boundary Pass, BC’s Saturna Island, Point Roberts, and Mount Baker. In summer, volunteers staff the lighthouse.

Sucia Island is considered by many recreationists to be the most beautiful of all the San Juans. The island’s 564 acres are entirely protected as a state marine park. The island was named after the Spanish word for “foul” or “dirty”—but in this case in a nautical sense, referring to the reefs and rocks surrounding the island. Shaped like a horseshoe, with several long slender peninsulas; Sucia is rich in biological diversity and human history. Extremely popular with boaters (especially in the summer), the island contains more than 10 miles of well-maintained trails.

From the docks at Fossil Bay (yes, there are fossils on the island), trails emanate in several directions. Look out into Fox Cove for its famous mushroom rock. From the golden grassy bluff called Ev Henry Point, take in breathtaking views of Matia, Orcas, Waldron, Pender, and Saturna islands, as well as Mount Baker. This point was named after yachtsman Everett (Ev) Henry, who led a drive to purchase Sucia from developers who wanted to subdivide it for vacation homes. Henry later donated the island to the state for a park.

Follow trails southeast along a forested ridge to Snoring Bay, and the finger-like peninsulas of Wiggins Head and Johnson Point. From open Johnson Point, soak up sweeping views of Mount Baker; Orcas Island’s Mount Constitution and Turtleback Mountain; as well as Lummi, Matia, and Clark islands.  Stroll along Shallow Bay, scanning its serene waters for otters, seals, harlequin ducks and guillemots. The bay’s beach is hemmed in by a boggy ghost forest, an excellent place for bird-watching—especially eagles.

At a narrow isthmus between Shallow and Echo bays, check out a sandstone cliff resembling a chunk of Swiss cheese, its façade pockmarked with shallow caves. Take the China Caves Trail, traveling over gorgeous wind- and surf-sculpted sandstone ledges, some of the prettiest and most photographed natural features in the San Juans. The caves, small depressions in a big sandstone bluff, were alleged to hide Chinese laborers smuggled from Canada in the late 1800s. The entire island has a history of smuggling, from illegal immigrants, to alcohol during Prohibition, to narcotics.

Hike along Lawson Bluff on a trail across precipitous cliffs. While hovering over the crashing surf, soak up stunning views of the Gulf Islands. The trail to Ewing Cove hugs the northern shoreline of Echo Bay. It’s one of the most scenic shoreline hikes in the San Juans. It travels up and over bluffs and ledges passing mature firs, gnarled junipers, and contorted madronas. Take in views of the nearby Finger Islands and Justice Island (which was seized from a drug smuggler in the 1980s) and farther out to Lummi, Matia, and Orcas islands. At Ewing Cove, look out to small islands and reefs that are hotbeds for seals and pelagic birds.

Matia Island is one of the eighty-three (mostly small) islands protected within the San Juan Islands National Wildlife Refuge. Washington State Parks manages 5 acres around Rolfe Cove on the island as a marine park. The rest of the 145-acre island is federal wilderness, affording undisturbed habitat for endangered and threatened species. Matia contains some of the oldest, biggest, and tallest trees in the San Juans. Dogs are not allowed beyond the campground and no off-trail travel is permitted.

The Wilderness Loop Trail starts near the Rolfe Cove dock. Hike through a tunnel of ancient forest greenery passing impressive gigantic firs, a huge hollowed-out cedar, and fern gardens. Then reach a hidden cove wedged between sandstone cliffs. You can follow a spur trail along open sandstone ledges to Bench Point and the tip of a small peninsula. Here take in excellent views of Orcas, Lummi, and Clark islands as well as Mount Baker.

The loop continues past the site of Civil War veteran Elvin H. Smith’s cabin. The famed Hermit of Matia lived all alone here from 1892 until 1921, when he vanished on a supply-seeking rowing trip to Orcas during a storm. The trail then reenters more primeval forest and passes a tiny cove and wetland before returning to the dock.

The Outer Islands clearly contain unsurpassed hiking opportunities when it comes to outstanding Salish Sea scenery. And in spring, you can add solitude to their attributes.

Craig Romano has written and co-written 17 books, mostly on hiking. He has hiked more than 19,000 miles in Washington. His Day Hiking the San Juans and Gulf Islands (Mountaineers Books) is the most comprehensive hiking guidebook to these Salish Sea islands. Visit him at CraigRomano.com.