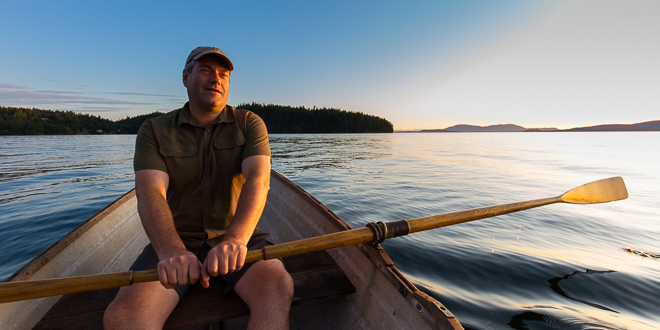 I am standing here on the west side of Chuckanut Island trying to understand what I am seeing and what to do about it.

This five-acre nature preserve is my responsibility—my wife Aimee and I are the stewards of this Nature Conservancy-owned land, officially known as the Cyrus Gates Memorial Preserve. There are beer cans and snack bags strewn about. Someone had illegally camped here last night, and they had a campfire which they failed to extinguish properly. The fire is now smoldering in the tree roots and acrid smoke is rising from the salal and duff, and it’s hot…really hot, and smoking.

We have a photographic record of the island that extends back 115 years. An image on a postcard from 1905 could have been taken yesterday: a forest thick with cedar and fir, graceful madrones twisting curvaceously on the south end above the tombolo. This island has never been logged.

Just two invasive species have impact: the English ivy volunteers pick, bag, and remove at a work party once a year, and Sapiens, “the worst invasive,” I think, as I look at this potential conflagration and consider what to do next.

I choose to do what Aimee did a few years ago in a similar situation on the island’s north end: bucket brigade. However, I am alone and have no buckets. I call John Perry, a neighbor with a boat and two young daughters, who are on the scene within 30 minutes. The girls and I clamber down to the beach with empty buckets, fill them with sea water, scramble hand over hand back up the trail with full sloshing buckets. We dowse the fire as John idles his boat just off shore.

Currently owned by The Nature Conservancy, the island is inhabited by the iconic species that make up this corner of the Pacific Northwest. Between the Chuckanut sandstone below—shaped near the waterline into fantastical undulating forms—and the very tops of the tallest Douglas fir, are the birds and plants and bivalves that make up the ecosystem I have been living with for a half century. I’ve known this island and bay, its shores and forests intimately. Even in the lifetime of a forest, 50 years is a significant stretch. “Of course,” I think, as steam rises from the nearly drowned fire, “I could have lost all this on my watch.” No land steward wants that.

But fire, and human use, has been a way of life on this island for thousands of years. The beaches are covered with fine white shell mixed with sand, and the forest floor is many feet thick with midden, the piles of discarded shells from a couple thousand years of shellfish processing by the Mamosee. Countless times, I’ve imagined these people, who knew and used these same bays and beaches and forests. As I row my dory, swim the waters, or trudge up the trail from the beach to the house on a cliff above the little cove that has been my home for so long, I imagine the stories of generations of Mamosee—my neighbors through the continuum of human history here on Chuckanut. In a real sense I feel a greater kinship with them than I do my contemporaries. “Especially the idiots who started this campfire,” I think, as I wave to John and his girls as they motor away.

When I was a boy, an old salt named George Garlick, along with his wife Lois, lived next door. George and Lois were biologists and dedicated environmentalists. By next door, I mean you could reach their house by tromping through the salal and Oregon grape, around the sword ferns, and between the fir and cedar, on a little-used path through the woods. As I grew up, I learned about the Salish Sea from George, and about boats, starfish, crab, and the huge sandstone formation that cradles all of the Chuckanuts. When Aimee and I were raising our own children on Chuckanut Point, we would make our way to their little house, where there’d be an owl standing on the back of a recliner in their living room, or a raven in the aviary, healing up after being hit by a car, or any number of birds convalescing at their house. Our children, not surprisingly, delighted in these visits to the Garlick’s house, just as I had as a child.

George and Lois were the Chuckanut Island stewards since 1976, but as they got too old to get in and out of the boat, they passed the job onto us. In 1996, we took on the responsibility, such as it is. It’s not too unpleasant to row out to the island, keep an eye on things, pick up a little litter, host a yearly volunteer ivy pull, and interact occasionally with The Nature Conservancy land steward from Seattle. Of course, there was the time when the two belligerent retired State Patrol guys refused to stop clamming on the beach. Or when someone had a huge wedding on the island, without permission. Or the defacing of the smooth surface of the madrones with carved initials. Or people camping. Or the fires, the damn fires. Then there’s just the fact of greater and greater use, more people in a delicate ecosystem.

I turn from the beach and head up the trail once more, past the sign welcoming visitors to our nature preserve. This is a new sign— the last one was torn off its posts and burned on the beach. I reflect that even with all this, the island is better treated than when I was a child, as the environmental ethic is stronger now than in the days where garbage was burned, trees and branches cut, and bottles were commonly thrown into the woods.

However, over my time here I’ve witnessed the depletion of the smelt and herring runs. The salmon populations have dwindled and the orca are right behind them. Starfish have virtually disappeared over two years. Cedars are under stress and dying around the Chuckanuts and the Pacific Northwest in general. Species are moving north to survive, including humans. We’ve known definitively since 1988 we were in trouble and needed to do something about it, but Sapiens has not acted commensurate with the problems. In fact, “environmentalists” themselves started flying for pleasure in record numbers along with nearly everyone else, consuming more, and producing more carbon than ever before. What we have is not a political problem, but a species problem. Sapiens.

Though our nature is to live selfishly for short term gain, one amazing thing about our kind is the ability to understand large systems: to choose, lay plans, take action, and to live with empathy and revel in the connection between all things. To me, stewardship is this. No matter the mess we have got ourselves in, what changes are coming towards us, no matter how bad it gets, we each have a choice: to understand and care for the very ecosystem that supports us, or to distance ourselves from it; to embrace change and death as part of life, or to reject and run from it. Stewardship, in its widest sense, is to love what is and care for and manage well for the future—not for our children’s children, as they say, but for all species, knowing fully we are all in this together, interdependent.

I can hear the hum of John’s boat, now long gone across the bay. I am left on the island to clean up the garbage and to cover up the wet, charred mess by headlamp. I don’t mind so much. It’s calm and peaceful in the gathering darkness, and I can almost hear the Mamosee children singing on the beach below me. 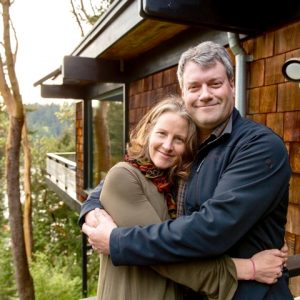 Peter Frazier has literally spent a lifetime on Pleasant Bay, a modest cove between Governor’s Point and Chuckanut Point in Chuckanut Bay, south of Bellingham, WA. He moved into his home on a cliff above the water in 1967 when he was three years old. The home was brand new then, built by Bellingham architect Sid Nesbit with help from Peter’s family.  He spent his childhood here, growing up beside the sparkling Salish Sea. He and his wife Aimee (the founder of Explorer’s Club/Wild Whatcom, the hugely successful nature-centric mentoring program for kids) were married on the deck, beneath the towering green trees that have gradually, over a half century,  filled the sky above the house. Their two children, Evan and Hadley were born in the living room. His mom died there.

In the 50-some odd years since Peter began his residency a lot has changed—and a lot has stayed the same. The neighborhood has become more upscale to be sure, but by and large, the wind in the trees makes the same music as it did fifty years ago.

Today Peter and Aimee are part owners of the Heliotrope Hotel and the newly opened Hotel Leo. They also operate Conflux Associates, a consulting group. They are—to put it mildly—engaged people. But Peter finds solace and peace in the place where he grew up and deep satisfaction in stewarding Chuckanut Island, a commitment that reflects Peter’s lifelong connection to this landscape. In our uprooted modern world, it is a rare thing to have such a deeply-established sense of place. 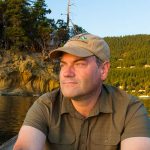 Peter Frazier spent 25 years as a customer researcher, user interface designer, and usability and brand consultant. He is now the Managing Partner of Heliotrope Hotel and Hotel Leo in Bellingham. A lifelong resident of the PNW, he and his wife Aimee have raised two children and enjoy time together sailing and hiking.