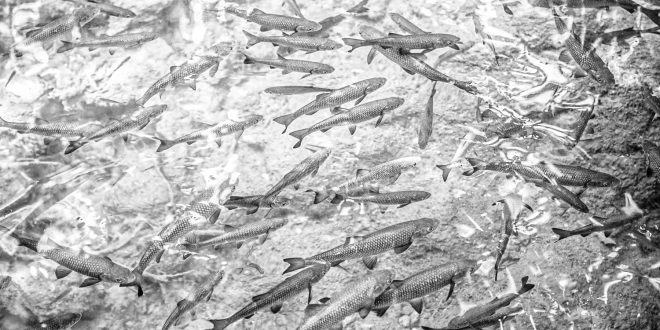 An alarming factoid has been floating around for a few years now: In a “business as usual scenario,” by 2050, plastics will outweigh fish in the ocean. This figure was first presented at the World Economic Forum in Davos, Switzerland, and is based on a study released in 2015 by the Ocean Conservancy. It says something about plastics, but it also says something powerful about our current inefficacy in fisheries management.

One might easily assume that certainly, the role of fisheries management is to manage habitat and harvest to keep the fishery healthy and productive in a way that sustains it in perpetuity, right? Count the fish, count the fishermen, maintain awareness of stressors, and respond accordingly. With sound scientific management strategies in place, all should be well.

But the fish have been in perpetual decline for over a century. In the Salish Sea, some salmon runs have gone extinct; others are critically endangered. Environmental stressors go unchecked, while economic pressures placed on harvest management creates a void in political goodwill to address the problems that face our once-abundant fisheries.

Salmon farms stationed throughout wild salmon migratory routes are breeding grounds for sea lice and pathogens released into migrating salmon populations as they make their way to the ocean. Warming rivers create hostile conditions for adult salmon returning to spawning grounds, while hydroelectric dams present a hurdle for juvenile salmon returning to the sea. Every step in their life cycle is rife with challenges.

A study by the National Oceanic and Atmospheric Administration showed that only 52.5 percent of migrating juvenile spring chinook survived the journey through all eight dams and reservoirs on the lower Snake and Columbia Rivers. This survival rate is startling on its own, dismal when you consider that chinook salmon are listed as a critically endangered species.

An important detail in the story of colonization, as well as in fisheries management, is that Western science knows best. We embrace its wisdom for all of the advancements we’ve made and congratulate ourselves for having left superstition and mythology in the childhood of our evolution. Yet, with all of this good science, why do we find ourselves in a moment of planetary crisis, where eco-systems face collapse, and keystone species are disappearing?

Indigenous scientist Dr. Leroy Little Bear offers this: “Western science is largely aimed at exploration, Native science is aimed at sustainability.” It’s pertinent to mention that one primary motivation of Western scientific exploration and discovery is to find resources to exploit for economic gain.

In 1883, Thomas Henry Huxley, the president of Britain’s Royal Society addressed the question, “Are fisheries exhaustible? That is to say, can all the fish which naturally inhabit a given area be extirpated by the agency of man?” His scientific exploration of this question yielded the answer: “nothing we do seriously affects the number of the fish.” The result of this declaration was that lethal new fisheries technologies were applied, and harvests went unchecked for the next 40 years. It was temporarily lucrative for the industry, permanently catastrophic for the fisheries, and the Indigenous Peoples who historically relied on them.

As part of Huxley’s legacy, in Bellingham, Washington, former home of the world’s largest fish cannery, an Environmental Sciences College is named for him. People in Bellingham are trying to rename a bridge that is named for a confederate soldier, but nobody ever questions the name of the environmental college named for a man whose scientific opinion enabled the plundering of our oceans. If exploitation of resources is the result of science aimed at exploration, what does science aimed at sustainability look like?

Dr. Little Bear gives us this: “If you look at things from a flux point of view, imagine your geodesic communal spider web in motion. Okay, you begin to see that everything is related… In Western thought, we try to isolate. We try to get down smaller and smaller and smaller and isolate, whereas in Native thought, it’s always holistic thinking—it’s always about the relational networks.”

Until now, I have spoken to you as a disembodied voice, given you scientific facts, isolated from my personal history and biases. Here, I break the fourth wall. I want to connect with you, invite you into holistic thinking, make you a part of my relational network, and speak to you from my identity as a member of the Lhaq’temish Nation, for whom the devastation to the fishery has been tragic.

Bellingham, Washington is situated on our ancestral homelands, and we have been historically shut out from practicing our way of life since the mid-1800s. As part of a relational network, from which we’ve been displaced, this exclusion is a shattering of a web.

A recent study shows that a spider’s web is part of its consciousness. A spider uses its woven filament to interact with the world. Every minute vibration is sensed and accommodated for. A breeze, a bird’s song, or an ill-fated fly will send ripples through the silk to the middle where the spider sits, senses, thinks, and responds. When it’s windy or when the web is heavy with rain, the spider will slacken the lines to release tension and maintain the strength and integrity of the web, its home, its extended body.

Similarly, when people use tools, the brain recognizes the instrument as a part of the body until we release it from our control. Our body is the home of our consciousness. The world is the home of our body. Everything is connected. We connect our consciousness to tools the way a spider is connected to the vibrations of prey and the subtle rhythms of the world that shimmer through its web.

Likewise, in Lhaq’temish culture, we were integrated with the web of waterways and landscapes of our homelands through thousands of years of interactions. We were in resonance with the systems on which we relied. The evidence of this is in how we practiced stewardship in our harvesting methods, and how our stories acknowledge the sacred in the other beings with whom we share our world.

As an example, I’ll tell you about the Sxwole (shwala). Today, it’s known as a reef-net because it works by creating an artificial reef. Migrating fish swim up through a manufactured tunnel of grasses and over the false reef into the net. It’s a unique technology that collects no bycatch and was traditionally made of willow withes. Because the fishery was tied to a rich cosmology, it was managed with regard for the fish as sacred.

The sxwole was modeled after the way nature creates human life. The sxwole is a womb. Fish swim into the net to give the spark of life to the people for another season. Because women were the net weavers, the reef-net was also an essential factor in how we arranged ourselves as a matriarchal society. Each woman who contributed a panel of net secured a share of the catch for her family, and in doing so, secured the esteem of the people.

Colonizers who tried to appropriate the technology had no feel for it and were deterred by the communal effort involved. They wanted a technology that afforded opportunities to secure the profit for themselves, without having to engage other people, and so the reef-net became the regional model for early fish traps, which were soon honed into a means of mass-harvest as witnessed in this passage:

“Then he began to reminisce and talk to me about the trap days when Bellingham canneries were so loaded that they couldn’t can them, and they used to dump as high as 30,000 fish. They just couldn’t do anything with them so there was dead fish all over.” –Jim McKay, 1974 (Lummi Elders Speak)

There was no mythical transference to the fish traps, no communion, no bringing together of minds and hands, no gratitude to the spirit for the gift of life. The traps were eventually outlawed in 1934, but the damage to the fishery had been done and fishing rights were not restored to tribal fishers until 1973. When tribal fishers returned to the water, reef net sites were all occupied by non-treaty fishers. Hydraulics replaced the strength of men. The intricate, glittering web of interconnection had been shattered, and the new story told by the people of the sxwole, has become one of survival and repair. We repair by connecting.

I recently learned a new word: Proprioception. It is “perception or awareness of the position and movement of the body.” I learned the word in relation to dogs. It turns out dogs tend to be mostly front-wheel-drive. They are not as conscious of their rear legs as their front, and this can cause hip problems later in life. As a modern society, reliant on Western science to inform our understanding of the world, we exclude all but observable reality from what we can know. In this, we are a bit like dogs, somewhat unconscious of what our behinds are doing.

Luckily, dogs can learn “rear-end awareness” and avoid problems down the road. People can too. We can learn how to physically interact with our world in a way that acknowledges the unseen and the sacred in each other—people, animals, waterways—and in seeing we can learn to live in non-destructive ways. 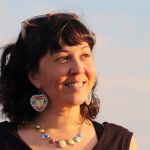 Rena Priest is a National Geographic Explorer, and a member of the Lhaq’temish (Lummi) Nation. She is the recipient of a 2020 Allied Arts Award and a 2018 American Book Award. Her work can be found in For Love of Orcas, Poetry Northwest, High Country News, and elsewhere. More at renapriest.com. 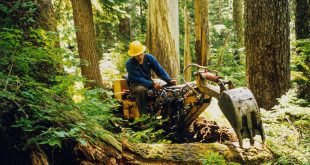