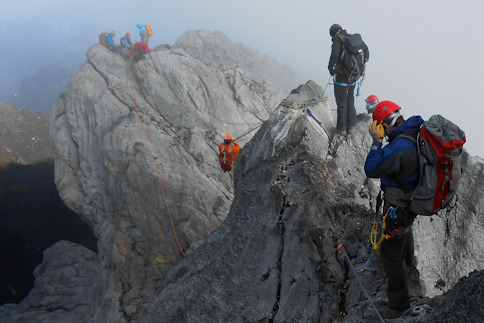 When I say “cannibal” I mean it in the kindest way possible. While these people do indeed consume human flesh, it is not as though they will eat just anybody. The tribes of western New Guinea love their brother, in a culinary sense, only when he is believed to possess valuable shamanistic powers, the likes of which they themselves hope to embody…literally. So unless you are David Copperfield, or make the mistake of performing card tricks, you probably are not in any danger. Probably.

It has been the policy of the Indonesian government to officially deny that cannibalism still occurs within its domain. Few things are worse for tourism. But the Government came clean during the time I was there, announcing the arrest of 29 indigenous persons on grounds of cannibalism. The suspects did not deny the charges. Indeed, they readily admitted to their actions, failing to see what was wrong with them. All resided in the territories my climbing team had twice passed through. Yet cannibals were not our top concern as we set out to climb Carstensz Pyramid in July of 2012.

We rendezvoused in Timika, Western New Guinea, at the Grand Tembaga Hotel on July 1. Our team consisted of twelve climbers, two western guides, two local guides and a cook. Our subsequent flight to the jungle village of Illaga was delayed when the small plane we were to use crashed the day before our scheduled departure. Then word came to us that an attack on Illaga by a neighboring tribe was imminent, a response to the earlier killing of their Chief. Scrapping our entire route, we decided instead to fly into Sugapa, an alternate approach to Carstensz. But three more days would pass before we could arrange a flight. In that time we were cautioned to stay in or near the walled compound where our hotel resided. The only other caucasians in Timika were typically executives of the massive Freeport gold mine, favorite targets of kidnapping for ransom, and there was concern we might be mistaken for one of them. Still, this too was not our greatest concern.

On most climbs we worry about the weather, or a particular pitch with a great deal of exposure to falls and avalanche. But on Carstensz Pyramid, the high summit for Oceania (including Australia), we worried first about the jungle militias. Since the distant days of 1972 there has been an underground movement for Papuan Independence from Indonesia. This movement has funded its guerrilla militias by taking hostages and robbing visitors at gunpoint (also bad for tourism). One such group emerged from the jungle, heavily armed, as the expedition just after ours got underway. They were summarily relieved of their financial resources and forced to stand in the open sun while the grass around them was set ablaze. Day one: expedition over.

So we laid low in a small wooden shack upon our arrival in Sugapa, trying not to attract attention to ourselves. But our local guide observed something that did not fit so we immediately packed up, disappearing into the jungle under cover of darkness amidst driving rain. It was incredibly hot in the jungle, even at night, and we were moving quickly. I was sweating heavily beneath my hard shell jacket. At some point I decided I would be no worse off without it. I put the jacket away and just let the warm rain soak me. One of our climbers was injured in a fall that night as we trekked to the village of Sunama. Unable to continue, he turned back the next morning with another climber who had already seen enough.

We had hired 15 porters from the Moni Tribe upon first arriving at Sugapa. By doing so, we were permitted to cross through their land. We would do the same upon entering the Dahwa and Dani tribal lands, accumulating a mob of 45 working porters. Each of these porters brought their families along, so as not to leave them unprotected back at their village. One porter might have four wives, several children and a grandparent in tow. So our numbers swelled exponentially as we ventured further into Western New Guinea. But this, as we saw it, served as insurance against the militias, hopefully making our substantial numbers a problematic target.

The remainder of the team left Sunama the next morning, trekking in rubber boots through the thick slippery mud. Three hours into the day, I crossed a mossy wooden plank serving as a bridge thirty feet above a raucous tumbling river. My attention was seized by a loud crack as I stepped off. I looked back in time to see Dori, a team member, fall off the plank and plummet back-first through the dense forest canopy. A moment later I heard her body land in the river below. Though she struck her head during the fall, Dori remained conscious and thus was able to crawl out of the river. Her head was bleeding badly by the time we got to her. Our guides administered first aid, cutting away her long beautiful hair to treat and close the wound. They wrapped Dori’s head in bandages and the entire expedition turned back to see that she made it safely to the airstrip. She was flown to a hospital in Bali. Several other team members left with her. We were now down to six climbers and starting over. With the various delays and setbacks we had suffered, there was barely enough time to attempt the expedition. There would be no rest days.

But the remaining six had bonded closely already, and the dream of one team member had become the dream of all. 65-year old Carol Masheter had already summited Mt. Everest and the rest of the Seven Summits, save Carstensz Pyramid. If she could do so, Carol would become the oldest woman in history to complete the prized Seven Summits. We had come to admire Carol and wanted this summit for her as much as for ourselves. So Deni (Montreal), Pal (Norway), Ivan (Dominican Republic), Carol (Utah), myself and guide Dan Zokaites (Colorado) set out once again.

The topography of Western New Guinea is comprised of steep ridges, like dinner plates in a drying rack. On a typical day we would ascend 5,000 feet, but descend 4,000 feet, averaging less than 1 MPH as we waded through mud and crossed leach-infested streams (It would be easy to malign the noble leach, but consider the fact he takes the bad with the good. There may be elements of your mis-spent youth still resident in your bloodstream. They are now the leach’s problem.). We made crude jungle camps, living among our native porters, eating yams, rice and strange indigenous fruits. A cinnamon tree was burned one night for a camp fire and the smell was intoxicating. On the fourth day we finally broke out above the jungle and onto the grassy savannah lands.

Falling down frequently is part of jungle trekking. I had watched Carol take many spills and pick herself up without comment. So I hoped the savannah would prove friendlier. But Carol suddenly became ill at this point, suffering from an episode of Irritable Bowell Syndrome. Unable to carry her own day pack, Carol grew so weak that she would lay down and sleep whenever we stopped for a short break. We considered turning back, but the nearest place a helicopter could be landed was at the base of Carstensz. So we pressed on.

By the time we reached Carstensz Pyramid, Carol had improved modestly. As we surveyed the 3,500-foot vertical rock face that would take us the remaining distance to Carstensz’ 16,048 ft summit, she made the decision to press on.

The rains typically came each afternoon around 2 p.m. At that point, the cracks we planned to climb would become rivers. So it was important that we leave early enough to get up and down before those rains started. I stepped out of my tent at 1:00 a.m. and looked up into the clear starry sky. “Whoa,” I commented aloud.

“What’s wrong?” Deni asked from inside the tent.

“Nothing wrong,” I answered, “We have a dry sky!” We had been rained on so much over the last several days that it had not even occurred to me we might have sunny conditions for this, the most important of days.

Using fixed lines left in place by prior expeditions, we clipped in and began our ascent by the light of our headlamps. Our metal gear rang pleasingly through the darkness as we worked, human wind chimes strung together in a symphony of ambition. I was breathing hard in the thin air, but enjoying every minute of it. Halfway up the face, dawn broke as a thin orange sliver reaching out through the darkness. We paused to watch it and sip water. A soft hue fell upon the peak above us, then slowly slid down to our perch. I could see Carol still ascending from below. She was moving slowly, but making decent progress. “Stay with it,” I shouted down to her, “you’ve got this thing!” Carol raised a tired hand in thanks.

Carstensz Pyramid forms a narrow razorback ridge. It is a (literally) breath-taking walk which falls off several thousand feet on either side. By the time we reached this ridge the summit could be seen at its apex, 300 feet away. Yet there was one final obstacle.

A void interrupts the ridge, a forty foot chasm falling several hundred feet.  A steel cable spans this gap to form a classic Tyrolean Traverse. The only means of crossing it is to clip one’s harness to the cable and pull hand over hand while hanging from it. One in ten climbers will choose to not summit at this point. I wondered about Carol. The hours of vertical climbing had taken a lot out of her. I could see it in the way she moved. She held to the back of the team as we cued up. But when her turn finally came Carol clipped in and fell back into the open sky. We all cheered her on from the other side as she grew exhausted and stopped to rest, started, then paused again.

Deni turned to face me as we approached the final few steps to the top. “Do you think we should let Carol summit first,” he questioned. “Absolutely,” I said. We both sat down. As other team members arrived they sat with us to form two rows between which Carol Masheter, age 65 ¾, walked into the history books. 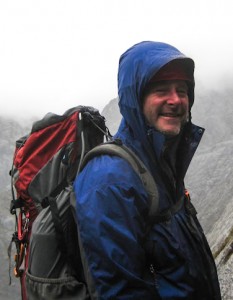 Dave Mauro is a longtime Bellingham, WA. resident. By day he works as a financial advisor at UBS. By night he is an improv actor at the Upfront Theatre. Now and again, he travels the world with the goal of climbing the highest summit on each of the planet’s continents. Accounts of his successful attempts of Denali, Kilimanjaro, Elbrus, Aconcagua, and Vinson Massif can be seen at www.AdventuresNW.com. And look for the final chapter of Dave’s epic quest -an attempt on Mount Everest – in the Autumn issue of Adventures NW magazine, available this September.

You can meet Dave when he gives a multimedia presentation (presented by Adventures NW and Bridget Collins House) on September 10 at 7:30 at Backcountry Essentials in Bellingham, WA.