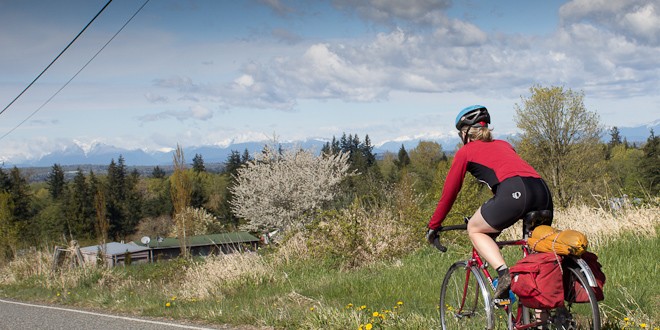 User Rating: Be the first one !

Where can you bicycle if you only have today and tomorrow? My range depends on which month of summer, as my comfort level with thirty, fifty, or seventy miles of riding increases with proximity to autumn. Then there are people like my husband who ride 100-mile days for three solid weeks in June, as he did from our home in Bellingham, Washington to our hometown of Ann Arbor, Michigan. Yet bicycle touring is not only a multi-week 3000-mile epic. On a weekend, cyclists can put gear in the panniers and adventure overnight within range of home. 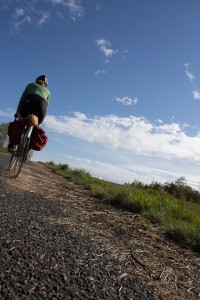 In terms of equipment, think light-weight. One set of layered clothes for after cycling and your food should pack into one smallish pannier. If you’re a do-it-yourself camper, put a lightweight sleeping bag, sleeping pad, and backpacking stove/cook pot in the other pannier. Bungee a lightweight tent onto your rack and you’re done. Resist the urge to take more. I once invited friends who had never bike toured on a two-night trip in the San Juan Islands. Even though I gave them a packing list, one showed up towing a bike trailer like you’d haul two children in. And it was completely stuffed.

While you are sorting or borrowing gear, decide your range and pick a destination. I think “camping” when bicycle touring, but perhaps you have a friend’s home or other lodging you’d prefer. To extend your network of friends, join Warmshowers online, a hospitality exchange for touring bicyclists. Or perhaps your style is more what is known as “credit card touring,” which describes skipping the camping stuff, sleeping in a real bed, and eating out along the way. With that option, you could leave the panniers behind and put your change of clothes into a handlebar bag or CamelBak. For camping destinations from my home in Bellingham, and within a distance of 50 miles or so, I can pick Silver Lake, Silver Fir campground out on the Mt. Baker Highway, Birch Bay, or even Point Roberts.

Bicycle touring is about the journey, and I find routes with fewer cars to be a better journey. After the mapquest route comes up for my destination, I click on the options button to check “no highways” or drag the friendly blue travel line onto much smaller roads.

To get to Silver Lake from Bellingham, I would follow along the north shore of Lake Whatcom and cut north on Agate Bay Lane or the Y Road to go around Squalicum Mountain to the east. Working the back roads north, cross the Nooksack River using Highway 542 or go through Everson, to find South Pass Road. A wonderful country road with rolling hills, for me South Pass evokes years of Ski to Sea. When I did the road bike leg, the route came down from Mt. Baker and used South Pass to reach Everson and the hand-off to the canoe leg.

Between Black Mountain and Red Mountain, Silver Lake offers forested camping. Plan your overnight in a window of sunny weather or be ready for mist. Make friends with other Loop One campers, because you won’t be the one bringing the firewood.

Silver Fir Campground puts you on the banks of the north fork of the Nooksack River, but there’s no alternative to Highway 542 most of the way. On a nice day much of the traffic will be early to hike the Mt. Baker area, so aim for a slightly later start time and hope for a lull.

Set up your tent under the Silver fir, western red cedar, and western hemlock trees, and then amble down to the gravel bar by the river for sunshine. Soak your legs in the cold water, or build Andrew Goldsworthy-inspired natural sculptures. Check out the film Rivers and Tides before you go, if you need an introduction to his work.

Pick a route past Hovander Park or skirting the Lummi Indian Reservation towards Lake Terrell Wildlife Area and on to Birch Bay. After you set up camp, you can hop on unloaded bikes for a meal in Birch Bay or even Blaine. The next day you could make it a north county tour by returning home via Lynden.

In an early family bike tour on a tandem bicycle, with our then one-year-old on the bike seat behind me, we did a two-night bike tour staying at Birch Bay and then Berthusen Park (no longer open to overnighting). I felt the Lynden-area farmers looking at us questioningly as we rode by, but we enjoyed going local and seeing the blueberry farms and dairy cows.

If you’ve got the legs to go further, you can add a border crossing, a wander through the southern British Columbia towns of White Rock, Surrey and Delta, and then back into the USA to camp on the geographical anomaly that is Point Roberts. I think I would borrow part of the RSVP (Ride Seattle to Vancouver and Party) route and cross into Canada at Lynden/Aldergrove, then head to Surrey.

I’ve always thought borders were fascinating. We humans create lines on maps that denote counties or states or countries, arbitrarily dividing the geography into this and that. The first time I bicycled into Canada, on a tour circumnavigating Lake Superior, we rolled up to the border crossing near Thunder Bay, Ontario. The border patrol officer came out of his booth and looked us over skeptically. Then he started into the stock border questions, but caught us off guard with “Are you carrying any firearms?” I looked at my little panniers and wondered what he was implying – that bike riding through his country was that dangerous or that we seemed like the type to be carrying? I shook my head, as did my companion, and we pedaled off musing about the likelihood of mixing guns and bicycles.

Many days and many miles back-to-back make for life-changing bike tours, but bike overnights are within reach for everyone. You could even extend your range by hopping on a train or bus. When our family was bicycling the Pacific Coast to San Diego, we camped next to a couple out for just the night. They had used public transportation to get them to the far edge of San Francisco, and then started pedaling. That addition increased their range, and, in one day, got them from urban living to camping in the Point Reyes National Seashore.

So assemble those key pieces of gear if you don’t already own or have access to panniers and lightweight camping equipment. Find a friend if you’d like company and chose a destination for your bike overnight. Browse bikeovernights.org if you need more inspiration, but get out there and discover what adventures can happen when you only have today and tomorrow. 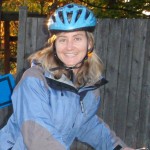 A bicyclist, backpacker, kayaker, and regular contributor to Adventures NW, Laural Ringler has published almost 80 articles. Her bike touring has ranged from double overnights on San Juan Island or the Sunshine Coast, to six weeks riding from Eugene to San Diego with kids and husband.