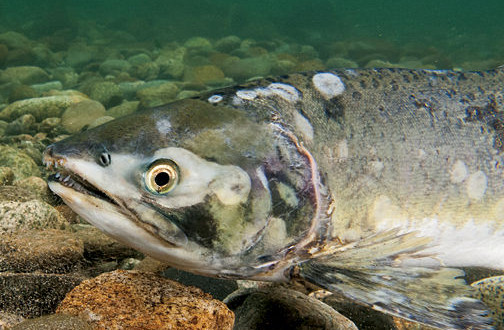 Story and photos by Jessica Newley

When the water first hits my face, it’s like being stung by little bees all over my cheeks. To top that off, I have an instant ice cream headache and if I don’t get my footing soon I’m likely to drown in four feet of water. As an avid scuba diver, the irony of that fact is not lost on me, and I take a second to gather myself. I’m standing in the middle of the Skagit River wearing a dry suit, 40 pounds of weight, and carrying my trusty underwater camera set-up. All around me are some of the most important and spectacular wild animals in the Pacific Northwest: Salmon.

Eight hours of snorkeling in 36 degree water in the middle of December may not be everyone’s cup of tea, but last winter, while living up at the North Cascades Institute, I ventured out to find new ways to feed my passion for the underwater world and natural history. Living in close proximity to the Skagit River, I knew I had a unique opportunity to get a close look at the amazing salmon runs and perhaps a few pictures too – if I was lucky.

Cycle of Life
The Skagit River flows down from the heart of the North Cascades, west through Sedro-Woolley and Mount Vernon, down to the Skagit flats, where it drains into Skagit Bay, a branch of the Puget Sound. The Skagit is the only large river system in Washington that supports populations of all five native species of salmon. Throughout the year, and mainly in the fall, the Skagit and its tributaries contain runs of Chinook, Coho, Pink, Sockeye, and Chum Salmon. Last winter was a particularly good run for the Pink Salmon, also known as humpies.

Along the lower tributaries, which feed into the Skagit River watershed, the smell of decaying fish cannot be missed. I have to admit; I have grown oddly attracted to it. Salmon carcasses litter the shore, picked apart by scavengers and other predators, in a giant process of regeneration. The pieces that are left decompose and reinvigorate the river shorelines and vegetative communities with a new supply of nutrients needed for a healthy habitat. Other members of the ecosystem also help with this process. Whether it’s a bear snagging salmon from the river and taking their bodies up into the woods, or a bald eagle flying high and dropping a salmon or two into the trees, salmon bodies play an important role in cycling nutrients through the ecosystem.

Salmon have long been important – economically and culturally – in the Pacific Northwest. Native-Americans of the region would hold annual celebrations to mark the return of the Salmon and ask for a bountiful harvest. When Lewis and Clark arrived on the Columbia River, there were an estimated 16 million salmon returning each year, a staggering number that was in large part responsible for the flourishing indigenous communities of the northwest. Shortly thereafter though, the pioneers started to arrive, and with them new techniques for fishing and, in particular, canning. These technologies greatly skewed the balance of man and fish in ways that we are still experiencing today. In fact, less than 3 percent of the salmon that graced the Columbia in the days of Lewis and Clark now return.

Just up the road from the Cascade River, a tributary to the Skagit, is the Marblemount Fish Hatchery. One of the eighty-plus hatcheries in Washington State, this facility aids in maintaining salmon and trout populations. This is a controversial subject, but proponents assert that hatcheries fuel the state’s commercial and recreational fisheries and support the many jobs that depend on them. Hatcheries were first introduced in the late 1800s when fish stocks radically collapsed due to overfishing, cannery waste and habitat destruction.

The “down side” to the proliferation of hatcheries is that as more hatchery salmon reproduce with wild salmon, there is a risk of loss of genetic diversity. Hatchery-bred salmon produce offspring that are less hardy than wild salmon, making them more susceptible to disease and other threats.

Salmon have specific habitat requirements for spawning and maturing successfully. Upon entering the cool, clean, waters of the Cascade River, it is clear that these habitat characteristics are present. This includes fine gravel for redd (nest) making, riparian vegetation and overhanging trees for shade, a good amount of large woody debris along the river banks to slow the flow down, and the right amount of velocity and stream temperatures.

My first clue that this may be a good place to take a look under the surface was the hordes of local fishermen on the banks of this particular part of the Cascade River. Donned in full gear and ready for the frigid waters, weird looks from these fishermen didn’t stop me. A closer look around the riverbank revealed large numbers of dead salmon, decomposing along the shore. Upon seeing this I couldn’t wait to stick my head under. Here goes nothing!

Down under
Immediately, I am struck by the strength of the water as it flows around my legs and torso. Even water that seems to lazily drift by is challenging to stand in without getting swept over. Luckily a large tree with roots growing out from the bank has slowed down the flow of a large area, suitable for safe entry. Looking out to the middle of the river, it wouldn’t take more than a slight slip to take me down river on an adventure I was not ready for. So, close to the bank I stayed, and soon I had my first peek into a world that I will never forget.

Instantly I was in the middle of hundreds of Pink Salmon. Males, females, fry (juveniles), eggs, mates, and enemies, they were all there, surrounding me in the icy water. There’s something extraordinary about being amongst these primordial beings and watching them in their natural habitat. It’s like peering in through a secret window into the lives of one of nature’s wildest creatures. While watching the fish swarm around me and make their redds, defend their territory, court a mate, or just plain get feisty with each other, I begin to understand a little more of the complexity of this species. I don’t know their whole story, but I try to imagine all they have been through. Seeing their battle scars and bacteria-laden scales gives me a clue.

By the time I encounter these fish, they have traveled 70 miles from the Puget Sound, up the Skagit, and into the Cascade River. Along their journey they have fought off disease, dodged fishhooks, and escaped from predators. When they finally reach their native spawning grounds, they barely have enough life left in them to reproduce before they die. After all of this, my presence in the water didn’t seem to concern them. They didn’t seem to care at all. From a photographer’s standpoint, this gave me a great opportunity to get up close and personal with the charismatic creatures.

When trying to take pictures of salmon, it is necessary to wade for long periods of time in the water. This can get very cold, very fast, even through a dry suit and layers and layers of undergarments. But this also means there is much more time to witness their behavior and let them get to know you. To get a quality picture it is important to get very close to the fish, especially when using a wide-angle lens. Luckily with the Pinks, this was not all that difficult to do. I found the most challenging part was staying in one position relative to the school.

I am used to ocean photography, and being in the rushing, shallow water of the Cascade River, things were different. In order to hold my position I ended up doubling the amount of weight that I normally might use to dive with. This allowed me to stay put and allow the fish to swim up to, and past me, while I photographed them. The obvious flip side to this method is that this weight is also very dangerous and I would not recommend that anyone try this at home. One slip into a deeper section with weights that cannot be quickly removed would spell the end.

Patience is essential. It took me a while before I got the hang of things, and finally, you could say it all just “clicked”. Since then I’ve enjoyed many happy and satisfying moments among the salmon and have taken many quality photographs of this spectacular species. But, there is one special moment I had on a cold November day in the Cascade River that I will never forget.

After waiting patiently for some time in the river; cold, tired and about to end the day, I noticed a female humpy becoming very comfortable with me. There were hundreds of fish around, but this female had very distinctive markings and was loaded with bacteria. It seemed as though every time I looked around, there she was. It wasn’t long before I could put out my hand and she would brush against it, positioning herself each time for a nice belly rub. Seeing her scars close up, looking her in the eye, and feeling her weak muscles pulsating against my glove brought tears to my eyes. I couldn’t imagine all she had been through and wished I knew her story. I named her Sugar, the sweetest salmon I’ve ever known, and the time we shared together that day will never leave my mind.

Getting to intimately know these beautiful beings has been a transcendent experience, well worth braving the cold and the weird looks from fishermen. I took away photographs, memories and great stories to share. This fall, when the salmon run starts on the Skagit, I’ll be there…